'First ray of sun in a long time': Hundreds of Quebecers receive doses on first day of COVID-19 vaccinations

MONTREAL -- Monday, or V-Day as many have taken to calling it, was the "first ray of sun in a long time," as hundreds of residents and staff at two of Quebec's long-term care homes began receiving vaccinations against COVID-19.

Those were the words of the province's Public Security Minister Genevieve Guilbault, speaking outside the CHSLD St-Antoine, the Quebec City long-term care facility where the first Quebecer, an 89-year-old woman, received their Pfizer-BioNTech-developed vaccine at 11:25 a.m.

"Being here today is very meaningful. This is a historic and very optimistic day," Guilbault said.

In total, 150 people at the St-Antoine long-term care home were vaccinated on V-Day. Guilbault said the province is aiming to vaccinate 525 people per day until the first shipment of 2,925 doses is finished.

Guilbault warned Quebecers not to give up on public health measures, saying she did not want "to lose people that far in the marathon. I'm asking people to continue to follow the rules and be very careful."

Earlier in the day, other government officials were taking a tentative victory lap as the first shots were being administered.

“You will hear the emotion in my voice, because this is a very big day for us today," said the provincial health minister, Christian Dubé, at a press conference outside of Maimonides Geriatric Centre in Montreal.

At Maimonides alone, about 300 people are scheduled to be vaccinated in the next couple of days, Dubé said.

"If we do half of them this afternoon, that's huge," he said.

"It's a big, historic day for Quebec. You know, they say that it's a big marathon that we've been doing for nine months. We're starting to see ... the light at the end of the tunnel," Dube said.

Though the province originally said elderly residents of long-term care homes would be the first in the priority list to get the shots, health authorities said Monday that some staff of those homes would also be among the first, including staff at Maimonides.

Federal Health Minister Patty Hadju was also at Maimonides on Monday to see some of the country's first vaccines given.

"I just talked to some lovely people in the back working here, at this centre," Hadju said, describing how she heard about their long work days and the "worry and anxiety" of possibly infecting their families.

"Obviously our nation's been under trauma, so I see this as the first step forward into the light," she said.

The first shots came after a packed week of preparatory work after Prime Minister Justin Trudeau's surprise announcement last Monday that vaccine doses would be on their way to Canada from Europe within a week.

Montreal's West Island health and social services (OIM-CIUSSS) president Francine Dupuis said that staff ran a simulation on the weekend, and another one this morning.

“Everybody is excited, they’re all very happy. At last, some good news in the health system,” she said.

Dupuis said there are many people who want the vaccine, but some who do not, and that there is no obligation for people to accept it.

She said they expect to inoculate four to six people per hour at the beginning, and that the rate will likely speed up as heath-care workers become more used to the protocols.

The toughest part, she said, was to follow the protocols "very, very thoroughly," and to "respect every step without making any mistakes.”

She was confident the staff was adequately prepared, though.

“It’s under control with the pharmacists and the doctors and nurses. They’ve done it over and over again, the dry run, so they know exactly what they’re doing,” she said.

Dupuis says the agency expected to receive 1,950 initial doses and that there are 975 doses per box.

Officials say they hope the vaccine will help protect the most vulnerable people in the province while bringing the pandemic under control.

Those who are vaccinated will still need to take precautions, warned Dupuis.

"They have to remember, though, that they are not protected immediately. They have to get a second dose three weeks after. And then the protection starts one week or two weeks after that second dose," she said.

"So they have to be very, very careful. And even after that, I would suggest they be careful, because you never know. It’s 95 per cent efficient, it’s not 100 per cent, so it’s a good thing to get, but it’s not a miracle.” 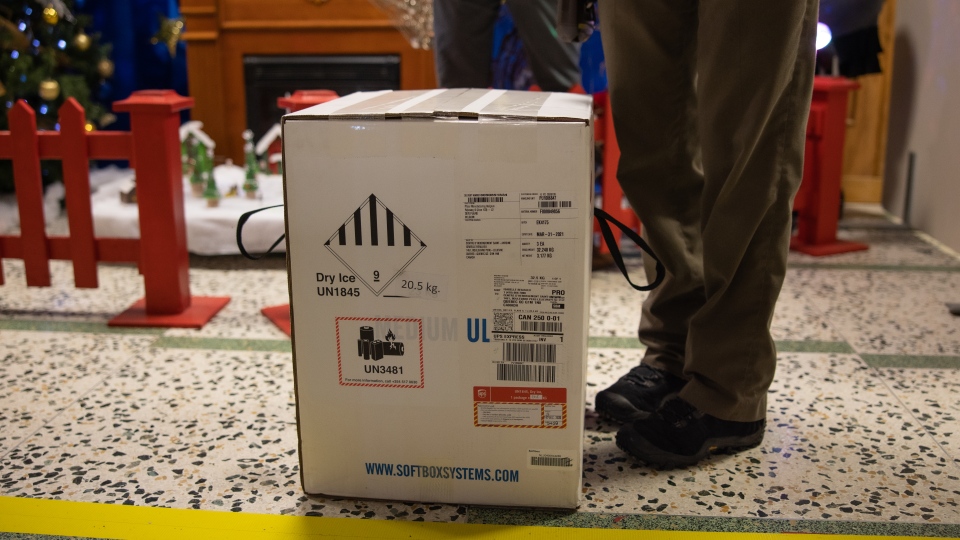