Quebec’s public security ministry has awarded a posthumous medal of sacrifice to firefighter Pierre Lacroix, who drowned in the St. Lawrence River trying to rescue boaters in distress last fall.

Medals of honour were also awarded to his three surviving colleagues, who accompanied Lacroix on the rescue mission: François Rabouin, Robin Brunet-Paiement and Michael Maillé.

Lacroix’s boat capsized due to strong currents in the Lachine rapids on Oct. 17. While preparing to tow the boat to safety, the firefighters' vessel, referred to as 1864, capsized and Lacroix went missing. His body was pulled from the water the following day. He was 58.

“Pierre Lacroix, a brave [firefighter] with more than 20 years of experience, gave himself body and soul, to the point of losing his life,” said Katia Petit, associate deputy with the public security ministry, in a press release.

“It is with hearts filled with emotion that we pay tribute to you,” she added. 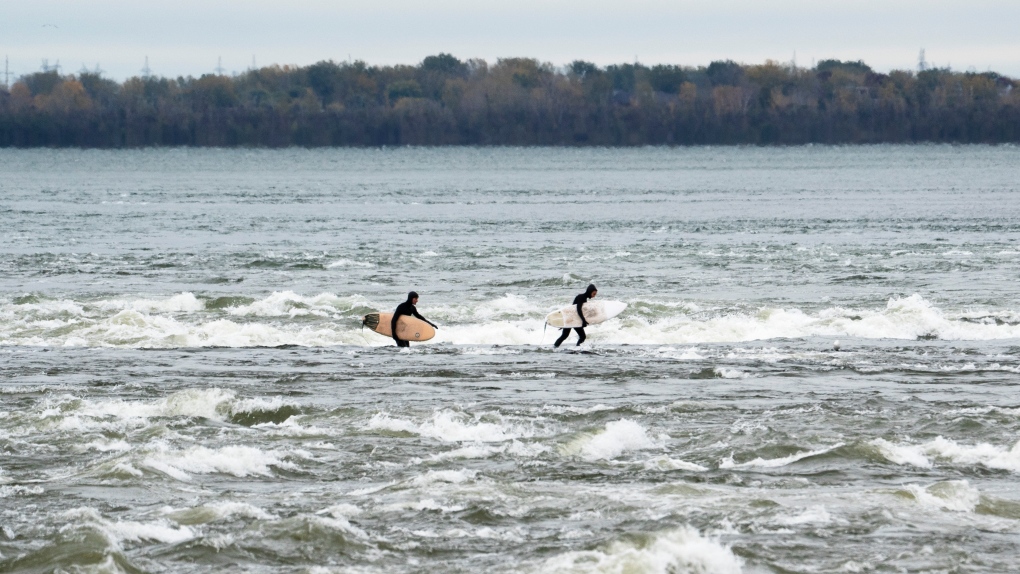 People look for spots to surf in the Lachine Rapids, Friday, October 22, 2021 in Montreal. The stretch of the St. Lawrence River where a Montreal firefighter died during a rescue last fall has been known for centuries as one of the city's most treacherous. THE CANADIAN PRESS/Ryan Remiorz

The awards come on the heels of a report from Quebec’s labour board, the CNESST, which found that Lacroix's boat capsized because of “deficient training,” and that the rescue mission required firefighters to enter waters “beyond the navigability limits of their boat.”

"Firefighters intervened on the basis of incomplete information during a rescue in a sector of the Lachine Rapids that went beyond the navigability limits of their boat," read the report.

"Deficient training of 1864's crew and shoreline command post responders exposed workers to the danger of drowning during a rescue operation in an unmarked area of the Lachine Rapids."

The labour safety board released recommendations for the fire department to identify the risks associated with water rescues, ensure firefighters know the limits of their boat, and "ensure that workers have structured theoretical and practical training in water rescue."

The four Montreal firefighters were among 23 others who received honours for their work across the province.

For example, three Salaberry-de-Valleyfield firefighters, Mario Thifault, David Gauthier-Garand and Sylvain Legros, were awarded after responding to an explosion at a factory and saving the life of a worker trapped at the bottom of a 20-foot hole. With only a 14-foot ladder, one of the firefighters had to hang upside down from the last rung to reach the worker.

Operations Captain Samuel St-Onge, in Shawinigan, was awarded for diving into a burning building without his first aid hose, which was too short to reach the resident trapped in his bathroom. Using his thermal camera and protective gear, he was able to save the victim.

Etienne Marchand, from St. Eustache, received the Cross of Courage after he twice braved the opaque smoke and suffocating heat of a building about to burst into flames to rescue colleagues trapped inside. He escaped the building just as a full-scale fire erupted.

Based on Justin Trudeau's first-day fail in the House of Commons, 'meeting the moment' is destined to become the most laughable slogan since the elder Pierre Trudeau’s disastrous campaign rallying cry in 1972, which insisted 'the land is strong' just as the economy tanked.

More disciplinary action may be coming now that the harrowing video of Tyre Nichols' treatment has been released. The Memphis police department is among many U.S. law enforcement agencies with 'duty to intervene' policies. Memphis police relieved two other officers of duty Monday and say the department is still investigating what happened.

A family in the remote First Nation community in Peawanuck, Ont., is dealing not only with the death of their young daughter, but the loss of everything they owned in a Jan. 28 house fire.

How did a radioactive capsule go missing in Australia and how dangerous is it?

Australian authorities are mounting an extensive search for a tiny radioactive capsule believed to have fallen out of a road train that travelled 1,400 km in Western Australia. Here's what you need to know:

Southern Ring Nebula's 'messy death' due to more than one star, researchers discover

Researchers were able to determine how the Southern Ring Nebula was created and understand how more than one star led to its 'messy death' by reconstructing the scene that happened thousands of years earlier.

As the B.C. government decriminalizes small amounts of hard drugs, critics note there are still not enough treatment resources for the users seeking them.

A 33-year-old Toronto man has been sentenced to eight and a half years in prison after pleading guilty to two violent sexual assaults almost a decade ago.