MONTREAL -- The developer of the controversial Royalmount development project on Tuesday revealed a revamped version that it says reflects what it heard from Montrealers during a consultation process it held last year.

The project presented Tuesday significantly reduces space in the project devoted to commercial outlets and includes 4,500 new residential units, which developer Carbonleo said will require a zoning change for the megamall project, which has elicited significant opposition since it was announced in 2018.

It also has less space devoted to hotel, restaurant and entertainment businesses, and almost 40 per cent fewer commercial and residential parking spaces. 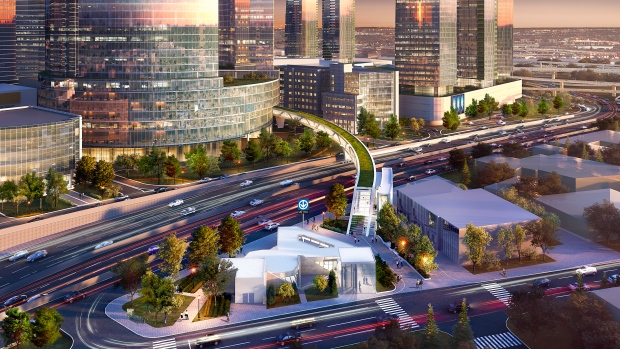 "Our vision for Royalmount is completely different than it was five years ago," Andrew Lutfy, president and CEO of Carbonleo, said in a statement Tuesday. "We reviewed the essence of our project in order to make it an iconic destination where the serenity of nature meets the bustle and excitement of the city. We want to create an inclusive place where everyone’s values and aspirations will be shared and explored."

Citizens' groups and other critics had been calling for more green space, affordable housing and public transit for the Royalmount project. Carbonleo said it expects most of the people working in the area to use public transportation, but the project does include 7000 indoor parking spots. If that many cars cram onto the already overloaded Decarie expressway and the nearby Highway 40, it could increase traffic, critics have argued.

But an electric shuttle service in the area will ease the strain on local public transit, Carbonleo representatives insisted, adding that, in the future, metro stops and other public transit options could be added.

"We would like to thank all the groups, organizations, and citizens who took part in our public participation process,” Carbonleo executive vice-president and partner Claude Marcotte said in a statement. “Their contribution has given us a lot of food for thought and, thanks to them, today we are unveiling a Royalmount that looks to the future."