Dan Robertson: A maturing Poehling is finding his game 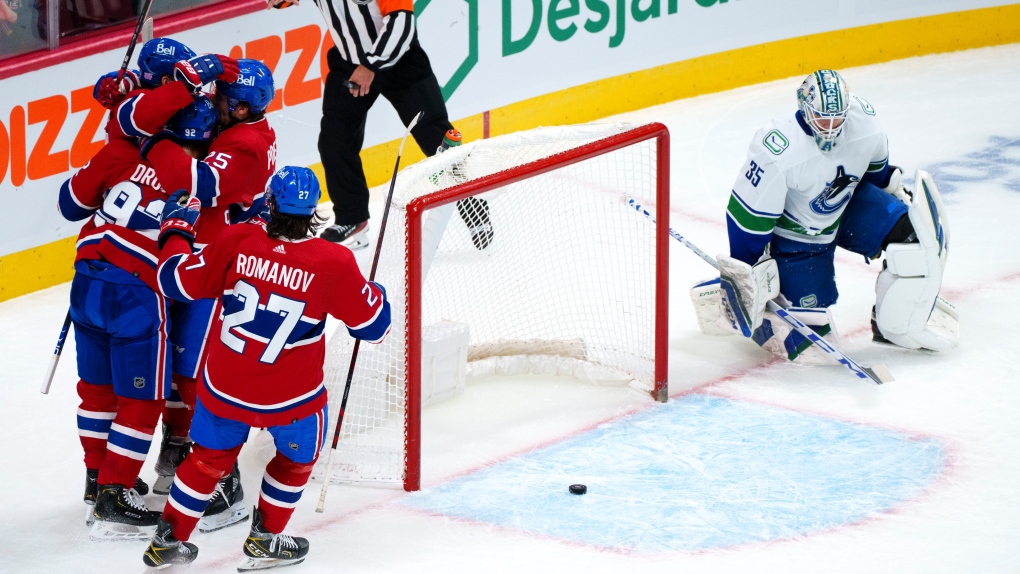 MONTREAL -- It was just one goal, but for Ryan Poehling it represented a big step forward.

Poehling scored his fourth goal of the season on Monday, Nov. 29 in Montreal’s 2-1 loss to the Vancouver Canucks.

The play didn’t make any highlight reels, but it was a prime example of the improvement in the 22 year-old’s game from his lacklustre training camp until now.

He joined the Canadiens on Nov. 11 for his season debut against Calgary after a seven-game stint in Laval in the AHL.

At camp, Poehling was hesitant and reluctant to use his size and speed to drive to the net. That issue is a thing of the past, at least for now.

"I’m just playing fast," said Poehling, following Tuesday's practice. "That (goal) was a good example….that quick turnover and I just beat the guy up the ice. If you don’t do that, you don’t get the goal."

“His feet are moving all the time. He’s flying," said Jonathan Drouin, who made a nice pass to set up Poehling for the goal. "He’s more mature in his game. He’s less nervous about some stuff where he is more comfortable playing in the NHL. He’s a fast forward and he knows the game well.”

Drouin re: Poehling - “His feet are moving all the time. He’s flying. If you look at (last night’s) goal, he gives me his stick but if you look before the turnover, he gets to the red line and he gets to the net really fast and creates a scoring chance.” DR

Poehling admits he was too tentative and guilty of over-thinking in the Canadiens’ exhibition games this year.

"I don’t know what I was thinking," he said. "With that stint in Laval I realized that it’s hockey, it’s been your life but at the end of the day, there’s other things, too. Just go out and play and have fun like you used to. I think that was the biggest game changer for myself.”

Poehling’s growing maturity both on and off the ice has been interesting to watch.

He said that if he plays his best this season with the Canadiens, things should work outc, but if they don’t, it wouldn’t be the end of the world to return to the Rocket lineup.

Poehling has confessed that he felt he was a lock to stick in the NHL after his remarkable three-goal performance in his big league debut to close out the 2018-2019 season.

But 2019-2020 was uneven for the centreman; he appeared in only 27 games with the Canadiens that season. An injury to his wrist ended his strong season at Laval last year and undoubtedly cost him a chance to play during Montreal’s remarkable playoff run in 2021.

There’s no guarantee that Poehling will stay in the NHL, but he will get every opportunity to prove himself this season.

Head coach Dominique Ducharme has said there is a process for a young player: first, to show he is good enough to make the team, then to earn more ice time and ultimately a bigger role with the team.

That’s where Poehling is right now.

Being paired with Drouin is a promotion of sorts and a vote of confidence from the coach. Nobody knows how long they’ll be linemates but their styles mesh well. Drouin likes to distribute the puck like a playmaking centre and Poehling’s developing power game could open holes and help get the puck on the sticks of Drouin and Joel Armia, who’s been playing with Poehling for a while now.

This has to be a season of development for the Canadiens.

Poehling got 11:31 of ice time in the loss to Vancouver. If he continues to show he can handle the workload, that number will go up. It has to.

The never-ending weakness at the centre ice position for the Canadiens needs to be addressed and if a homegrown, former first-round pick on a team-friendly contract can help, that would be ideal.

He needs to get heavier and stronger. Hopefully, for him, he can enter next off-season healthy and able to workout properly, something he couldn’t do this past summer because of wrist surgery.

Like most players his age, his game needs fine-tuning. For example, if he could be at 50 per cent on faceoffs or even a little bit better, that would also help his cause.

It might be a bit of a long shot to see Poehling as a number two centreman in the league but the role of a third-line centre who is strong at both ends of the ice is a possibility. Poehling’s progression toward that end would be a great story for the Canadiens, in a season that has had precious few.