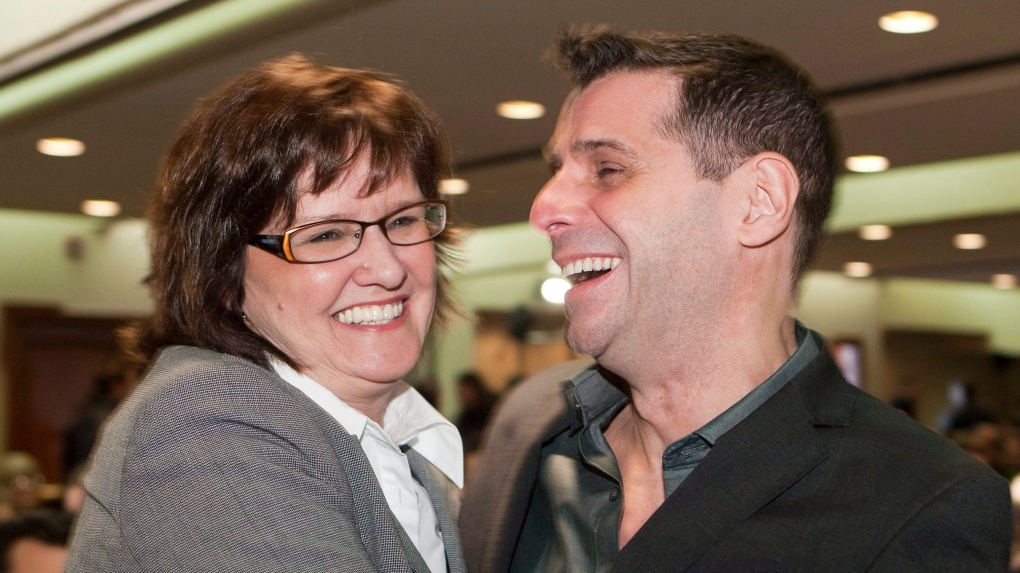 Joanne Marcotte, left, and Eric Duhaime, co-founders of the Reseau Liberte-Quebec, smile at the beginning of a right wing meeting Saturday, October 23, 2010 in Quebec City. On April 17, 2021, Duhaime was elected leader of the Quebec Conservative Party. THE CANADIAN PRESS/Jacques Boissinot

MONTREAL -- The Conservative Party of Quebec has a new leader, and its someone with more name recognition than the party itself.

“I want to stand up for ordinary people,” said columnist and radio host Eric Duhaime after winning the job with an overwhelming portion of the votes after a six-month race that was held entirely online.

In his victory speech, the new leader of the right-wing party said he intends to defend those who “have been treated as toothless because they don't agree with what is being done by the government or who are being treated wrongly as conspiracy theorists or covidiots... by (Premier) Francois Legault and a media and political elite who have lost contact with the real world.”

Duhaime also said he would be the voice of those he called “COVID sacrificed” and who are “currently suffering enormously from health extremism... and incompetence” from the provincial government.

The Quebec celebrity garnered 95 per cent of the 9,886 votes cast. His only opponent was computer scientist Daniel Brisson.

The new leader, who lives in Quebec City, succeeds Adrien Pouliot, who announced his intention to resign in mid-October after seven years as head of the party.

Duhaime said the pandemic has led him to conclue the Quebec healthcare system has become “quite simply indefensible in its current form.”

“All Quebecers must have quick and easy access to healthcare,” he said. “This principle is not negotiable but everything else has to be put on the table and reviewed.”

He proposed the problem could mostly be solved by decentralizing the decision-making process in the health system and further privatizing it.

The party must also take a “nationalist, patriotic turn,” he said, adding that Anglo-Quebecers have historic rights that must be respected.

Around 1,500 people watched the unveiling of the results on the party's Facebook page. The announcement was delayed due to bad sound quality during the first 10 minutes of the livestream.

The PCQ won 1.46 per cent of the vote in the 2018 provincial election, placing sixth behind the Green Party of Quebec.

Duhaime co-founded the Reseau Liberte-Quebec, a non-profit organization whose objective is to bring together the libertarian right.

He has also previously run for the National Assembly in 2003 under the Action Democratique du Quebec party, finishing in third.