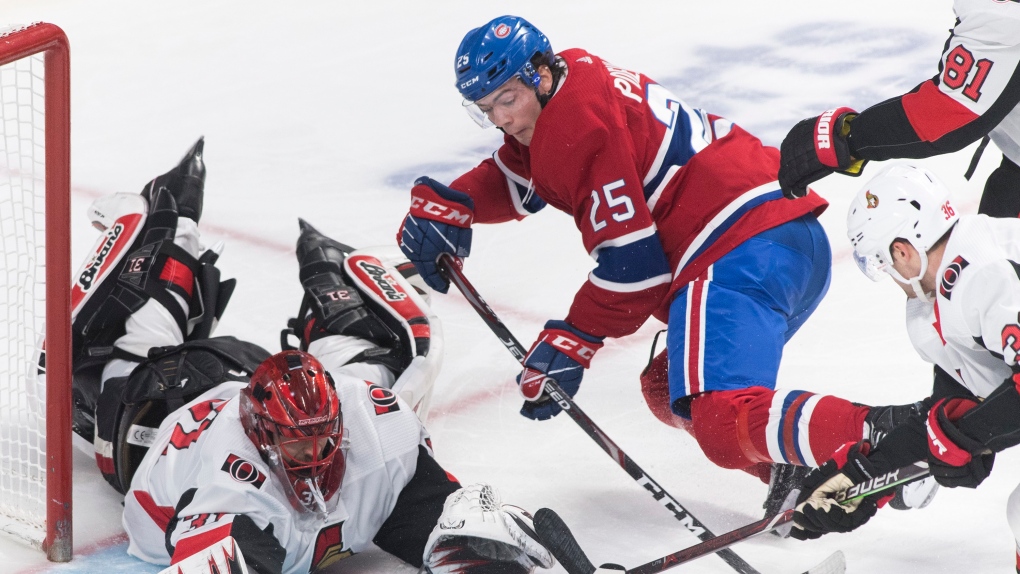 MONTREAL -- Ben Chiarot scored the overtime winner and Cayden Primeau made 35 saves for his first NHL victory as the Montreal Canadiens defeated the Ottawa Senators 3-2 on Wednesday.

Nick Cousins and Tomas Tatar scored in regulation for the Canadiens (15-11-6), who have won three in a row and four of their last five.

Montreal was playing the second half of a back-to-back after beating Pittsburgh 4-1 Tuesday.

Primeau won the tight goaltending battle over Anders Nilsson, who stopped 26-of-29 shots and fell to 0-2-1 all-time against Montreal.

Chiarot scored the winner 1:11 into overtime on a 2-on-1 with Max Domi after Ottawa overcame a two-goal deficit in the third period.

It took Tkachuk six shots but he finally scored on Primeau, a power-play goal between the pads at 4:30 of the third with Brendan Gallagher in the box for tripping.

Ryan Poehling, recalled from the Laval Rocket this week, nearly gave Montreal a 3-1 lead but Nilsson denied him on the doorstep with his stick flat on the ice.

The Senators tied the game three minutes after that. Tkachuk stole the puck from defenceman Otto Leskinen and quickly fired on Primeau, with Brown there to cash in the rebound at 13:05.

The Senators came out flying in the first period and led 8-1 in shots but the Canadiens settled the game down and got on the board first.

Cousins gave Montreal a 1-0 lead at 13:36, on the power play, by deflecting a hard pass from Max Domi up and over Nilsson's shoulder.

The 20-year-old Primeau stopped all 12 shots he faced in the first while dealing with constant traffic in front of his net.

Primeau, the 199th overall draft pick in 2017, was even busier in the second when Montreal's loose defensive play led to three odd-man rushes.

The six-foot-three goaltender denied winger Tkachuk on a 3-on-1 midway through the frame, where Tkachuk opted to shoot instead of pass.

Primeau later stopped Jean-Gabriel Pageau on a short-handed 2-on-1 before frustrating Tkachuk again on another fast break 30 seconds later.

Nilsson did his part to keep the Senators in the game with a late-period breakaway save on Gallagher, who snapped his four-game goal streak.

The Canadiens took a 2-0 lead 29 seconds into the third when Tatar's shot ricocheted off defenceman Mark Borowiecki and skipped over Nilsson.