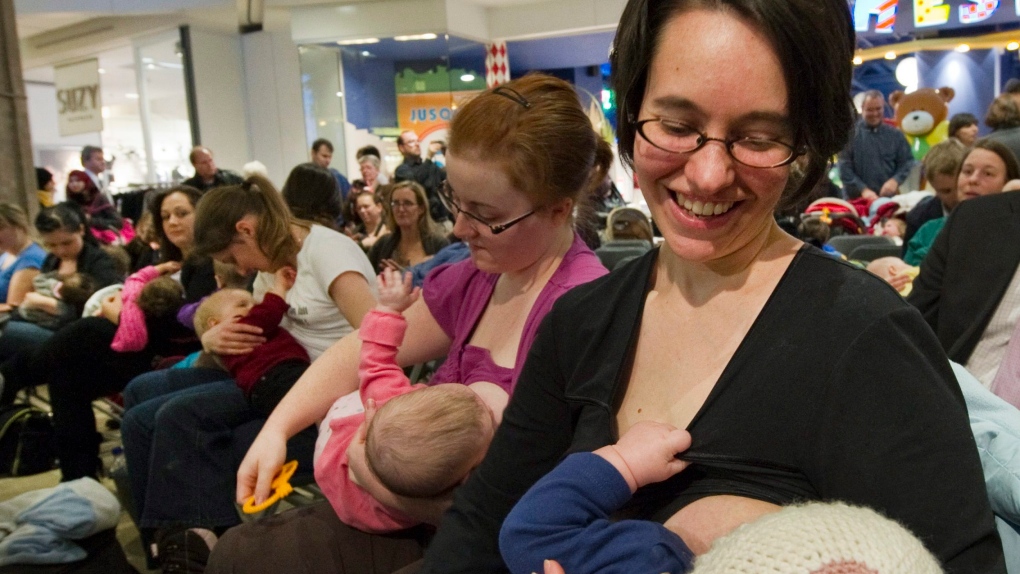 Women breastfeed their babies at a protest for nursing in public in Montreal, on January 19, 2011. -- FILE PHOTO (THE CANADIAN PRESS/Ryan Remiorz)

Premature babies who received the highest amounts of breast milk, both during and after their hospitalization in a neonatal intensive care unit, did better in school a few years later, U.S. and Australian researchers have found.

Breast milk consumption was notably associated with better reading and math scores, and parents of children who drank the most breast milk reported fewer ADHD symptoms.

The duration of breast milk consumption (in some cases until the age of 18 months) was associated with better reading, spelling, and math scores.

We know that premature infants are at greater risk of developmental delays or difficulties that persist into school age," said pediatrician Thuy Mai Luu, medical director of the Neonatal Follow-up Program at Montreal's Sainte-Justine Hospital.

"Certainly, if we can see a beneficial effect of breast milk on a child's development, then it's a protective measure that can really help a child's brain development, so I think that's even more important," she said.

Doctors (and parents) have known for a long time that breastfeeding is by far the best thing for babies, whether they are premature or not, and that there are "many more advantages than disadvantages" to doing so, Dr. Luu added.

Breast milk, she continued, contains components such as fats, which promote brain development. Breast milk is also known to influence the composition of the gut flora.

"More and more, a link between the diversity of our intestinal flora and brain development is being demonstrated, and this probably plays a role through inflammation mechanisms. We know that, basically, breastfeeding promotes a microbiota that is much more optimal," said Dr. Luu.

Breastfeeding also has a "relational" component that is very important to a child's development, she continued. Pumping breast milk or breastfeeding "creates a positive interaction between mother and child."

"Then we know that positive interactions between mother and child, they're a very important starting point for stimulating the child's development and therefore having a better or more optimal development," Dr. Luu said.

That being said, breastfeeding is not always as simple or as easy as one might think, and one should avoid making moms feel guilty for making it more complicated or even impossible, she added.

There are interactions that are easier to establish when breastfeeding, but there is the possibility of replicating these positive interactions without breastfeeding," Dr. Luu said. "Promoting sensitive, positive, nurturing interactions for both mother and child is something that is critical in the development of a small baby's brain."

The environment in which the baby grows up will also have an impact on brain development. In fact, in the U.S.-Australian study, the beneficial effect of breast milk on brain development was somewhat attenuated when researchers took into account the social environment, "as [that] plays a big role," Dr. Luu concluded.

The findings were published in the JAMA Network Open medical journal.

This report was first published by the Canadian Press in French on July 18, 2022.

Ceremonies, marches and other gatherings are taking place across the country Friday as communities mark the National Day of Truth and Reconciliation. The federal statutory holiday was established last year to remember children who died while being forced to attend residential schools, as well as those who survived, and the families and communities still affected by lasting trauma.