Shortages of some baby formula in Quebec due to panic buying, U.S. supply issues 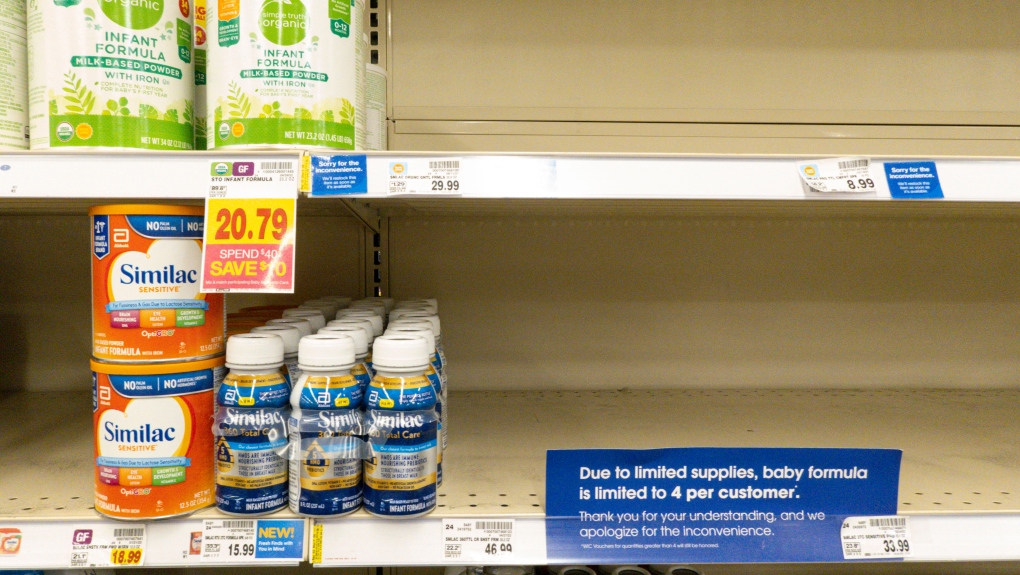 Baby formula is displayed on the shelves of a grocery store with a sign limiting purchases in Indianapolis, Tuesday, May 10, 2022. (AP Photo/Michael Conroy)

When Catherine Labrecque-Baker went to purchase hypoallergenic baby formula in mid-April for her six-month-old baby, her Quebec City pharmacist told her there was none left.

In response, Labrecque-Baker travelled to another pharmacy in the city and bought five times the amount she normally does.

Then she started to stress as she fed her baby and watched her stockpile slowly shrink.

Her son has an intolerance to cow's milk protein and relies on Alimentum, a product by American formula maker Abbott, which voluntarily recalled its products in February after four illnesses were reported in babies who had consumed powdered formula from its Michigan plant.

"What am I supposed to do?" Labrecque-Baker asked. "I cried an entire night, wondering what will I do when I don't have any more formula."

The disruptions at Abbott, the United States' largest formula maker, are causing supply issues for specific hypoallergenic formulas across Canada, according to Retail Council of Canada spokeswoman Michelle Wasylyshen.

But in Quebec, parents are noticing shortages of other formulas on the province's pharmacy shelves -- a result of panic buying, Wasylyshen said.

"There's a ripple effect," she said, referring to parents who are scooping up more formula than normal because they fear it will go out of stock.

"We don't want to see a return to panic buying -- that approach doesn't help anyone," Wasylyshen said. "Some of our retailers have put limitations in place in terms of what customers can purchase, just to make sure there's enough for everyone."

The company is one of only a handful that produces the vast majority of the U.S. formula supply, so Abbott's product recall -- involving brands Similac, Alimentum and EleCare -- wiped out a large segment of the market intended for babies with allergies or intolerance to cow's milk protein.

On Monday, Abbott said it had reached an agreement with U.S. health officials to restart production at its Michigan factory, a key step toward easing a nationwide shortage.

Quebec is not facing the same kind of shortages as in the United States, but Wasylyshen said images of empty pharmacy shelves in the province started circulating online, causing anxiety.

Monday, the province's Health Department said it's working with Quebec's association of pharmacy owners to minimize the shortage's impact.

"We are looking as far away as Europe to counter this lack of supply," department spokesperson Marjorie Larouche said, adding that shortages are being noticed across Canada.

LISTEN ON CJAD 800 RADIO: Why is there a baby formula shortage?

Marilie Beaulieu-Gravel of the pharmacy owners association said that after Abbott's Alimentum formula disappeared from shelves, parents rushed to purchase Nutragimen, another hypoallergenic formula made by Mead Johnson & Company.

"There isn't a production issue with this product, but rather a domino effect," Beaulieu-Gravel said. "The demands for the products increase sharply and unexpectedly on the market."

While Nutragimen products are expected to be back on shelves by mid-June, Beaulieu-Gravel said her association isn't expecting the supply of Alimentum to return before the end of summer.

Meanwhile, some parents, including Labrecque-Baker, are left searching for formula everywhere, even online.

"I looked on Facebook Marketplace, on Kijiji … friends have been looking for me or giving me what they can," Labrecque-Baker said. "This week, I spent $200 because I can't wait and risk it. The more I can stock, the more days I can feed my child."

-- This report by The Canadian Press was first published on May 17, 2022 with files from The Associated Press.