Binge-vaping, a dangerous new COVID-19 coping strategy among some teenagers in Montreal 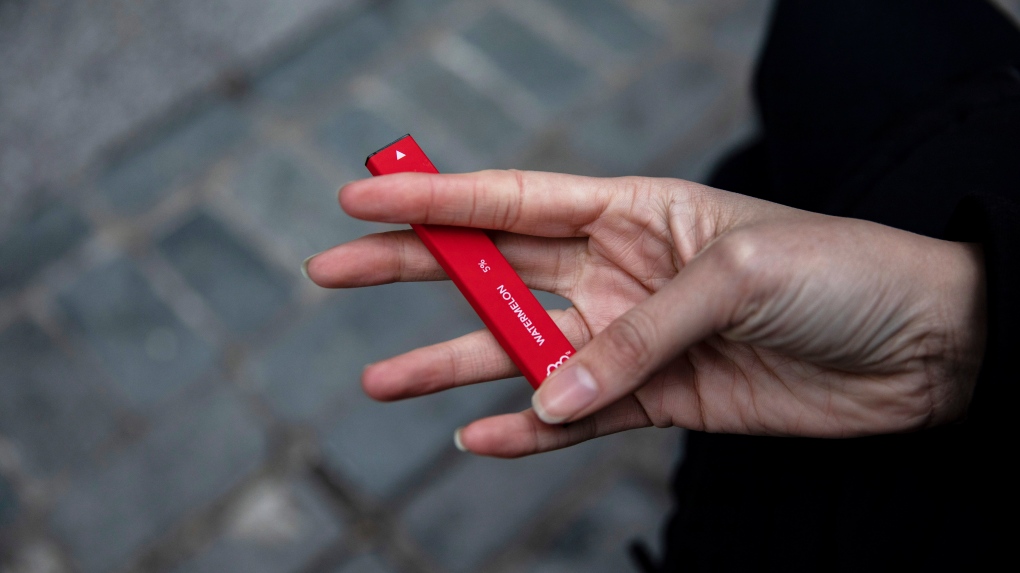 What starts as a pastime can spiral out of control and turn into a serious medical problem for those who are more vulnerable to mental health issues, says an expert who is worried about teenagers binge-vaping during the COVID-19 pandemic. (AP Photo/Marshall Ritzel)

MONTREAL -- A pediatric addictions expert in Montreal is sounding the alarm about an increase in the number of teenagers referred to his clinic, who are vaping in a more harmful way during lockdown than in pre-pandemic times.

He describes it as binge-vaping.

The behavioral changes have resulted in serious nicotine addictions and worsening mental health problems for some teenagers and even pre-teens, according to Dr. Nicholas Chadi, who oversees addiction services at Ste-Justine Hospital.

The adolescent specialist is treating children “who are using a lot of these vape products and cannabis and alcohol, and in a way that is definitely more intense than before the pandemic,” he says.

He says parents need to be aware of the dangers.

The slide into substance abuse is being attributed to the effect of various COVID-19 restrictions in place in Quebec and the high levels of stress they can cause.

Young people who can’t hang out and pass the time with their buddies anymore, are turning to vaping, Dr. Chadi says, as one of the only things they can do because they’re alone, bored and feeling low.

“They’re losing their support networks, their activities, their friends, their school,” he says.

THE DANGERS OF NICOTINE ADDICTION

But what starts as a pastime can spiral out of control and turn into a serious medical problem for those who are more vulnerable to mental health issues. Some of Chadi’s patients are as young as 13 years-old.

“Young people are telling me, you know I can just sit in my room and vape until my pod or my cartridge is empty, I’ll just plug it in charge it and just vape and vape and vape - get a head rush, get the buzz from the nicotine and then there’s no more,” the addictions expert says.

The negative consequences don’t take long to materialize. They can’t sleep because they’re “high on nicotine, my heart is beating fast,” says the specialist.

The lack of sleep causes depression, and fatigue - but the teens say “because I vape all the time, I can’t stop.”

The child becomes trapped in a vicious cycle of psychological and physical problems that is hard to escape - partly because the vaping itself, has escaped detection for too long.

“For parents it's tricky because [with cigarettes] you would smell the smoke on your kid’s clothes, you would smell the breath you would have all these signs, so parents may catch-up very late on the fact that their young people are vaping and they might by that time already be addicted.”

It doesn’t help that too often ideas and messages about the risks and benefits of vaping are fuzzy, especially when vaping is sometimes touted as a way for adults to quit smoking.

The same is not true for their children, the doctor says.

“There is to this day no convincing evidence that vaping products could help young people quit or reduce smoking, so this in itself is a confusing message.”

The addictions expert says parents need to educate themselves, and then make it a dinner table conversation, answering questions and setting rules as they would for the use of other substances.

IS VAPING A GATEWAY?

An increasing number of studies suggest that young people who vape have a higher likelihood of moving on to tobacco and cannabis products, alcohol and other substances, says the Ste Justine clinician.

The takeaway for parents, Chadi says is to consider your teenager’s vaping as substance use - and not a benign alternative to other products, given the amounts of nicotine the devices can contain.

In the context of a pandemic where access to mental health services are stretched in Quebec, the pediatrician says, waking up to this current COVID-19 coping mechanism among children, can save families a lot of grief.