Art imitating life: Some say oversized ceramic vaccine vials are 'hysterical,' others say 'it's too soon' 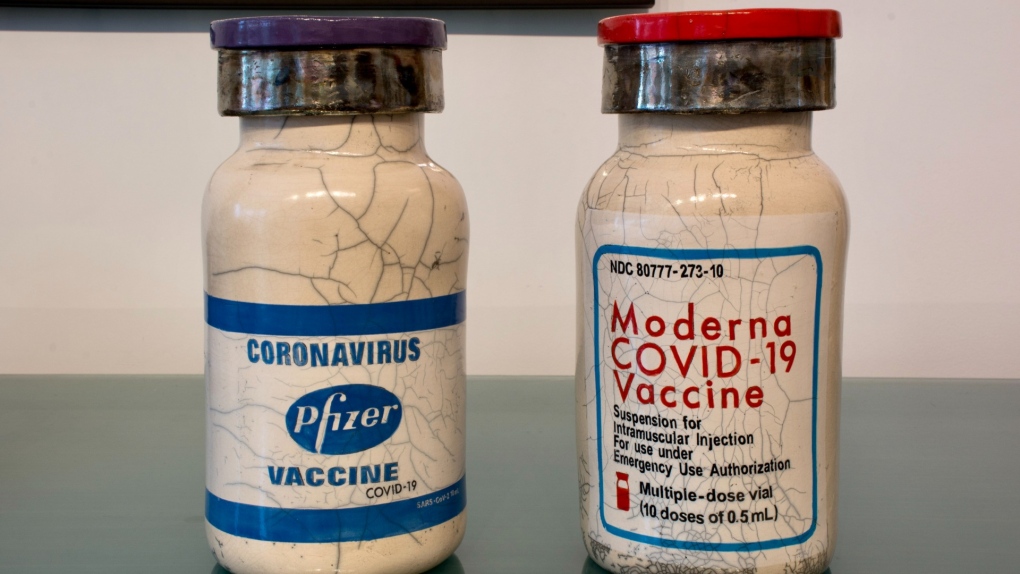 If pop art reflects culture and society, then a Quebec gallery owner is displaying the most relevant examples imaginable: two sculptures of oversized COVID-19 vaccine vials.

“I saw the vaccines and I said, ‘I think these are hilarious,’” said Mark London, owner of Galerie Elca London, which, after 60 years in business in Montreal, recently relocated to the town of Knowlton in the Eastern Townships.

“What I like is she supersizes mundane objects from everyday life and they take on a very different personality,” said London, referring to the work of American artist Karen Shapiro.

“They just have this cool factor that I love,” he said.

He promptly procured them for his new showroom, thinking they might be a good “booster” for visitors’ spirits and to add them to his existing Shapiro collection.

Shapiro is a well-known and prolific artist in California who at the age of 74 is still busy creating unique Raku ceramic reproductions of household items and products, as London described.

No two pieces of pottery are alike. Shapiro mixes her own glazes and creates each piece and any metallic special effects by hand.

Iconic brands of cosmetics, food items, automotive products and pharmaceuticals are among her eclectic and sometimes irreverent works of art.

Over the decades her ceramics have been purchased by several celebrities including the late writer and actress Carrie Fisher, who received Shapiro’s 38-centimetre long sculpture of a Prozac capsule as a gift.

“I knew she had it, she loved it. She contacted me and asked me if I would do a Quaalude for [actress] Penny Marshall,” Shapiro told CTV News in an interview from her home in California’s Mendocino County, “under the redwood trees, by the ocean.”

Along with the giant pill, the Star Wars actress asked Shapiro to include a note for her pal Marshall “that said, ‘Remember the good old days.’ So that was really fun,” the artist said with a laugh.

So enamoured was Fisher with the sculpture she owned, that her family transformed the Prozac pill into an urn to hold her ashes, according to an article about her funeral.

“Carrie would like that. It was her favourite thing, and so that’s how you do it,” brother Todd Fisher told Rolling Stone on that day, as he explained the unique choice of urn.

VACCINE ART: SOME LOVE IT, SOME SAY ‘IT’S TOO SOON’

Karen Shapiro relies on her instincts when she’s deciding which objects to configure in clay, usually concluding that “it will make me laugh so it will probably make other people laugh,” she said.

The idea for the vaccine vials came to her as she was getting vaccinated herself.

“When I got my shot, the first shot, a friend of mine was directing people around and she got one of the little vials. I looked at it and said, okay, I have to do that.”

She said she now gets one of two strong reactions when people set eyes on the 36-centimetre high Pfizer and Moderna vials with a crackle finish.

One supposes an artistic version of a vaccine would be appreciated by scientists, doctors and health-care workers who are keenly aware of what life was like before and after the COVID-19 vaccines were available.

In a case of art imitating life, London suggested that just like the vintage product tins of yesteryear you’d find in an antique shop, the whimsical vaccine sculptures are “soon-to-be-classics.”

“Right now they make you laugh,” he said. “But 20 years from now, god willing, people can say, ‘Remember when we had to get those vaccines?’”

IS A BOX OF CHICLETS MORE YOUR THING?

The other pieces London showcases, among the scores of designs Shapiro has produced, evoke various memories or associations depending on a person’s age.

For example, at opposite ends of the generational spectrum, there’s a giant ceramic tube of Bain de Soleil from the '70s and one of Nars super orgasm illuminator, from today.

There’s also a jar of Grey Poupon, a container of Morton’s salt, a tube of toothpaste - all very recognizable and ranging in price from $700-$1650.

One of Shapiro’s popular, early pieces, a pill labelled ‘FU*IDOL 1000mg,’ was inspired by a Robin Williams routine, she said after he joked onstage he wanted “to have a drug that encompassed it all. Call it fu**itall. I don’t feel anything. I don’t want to do anything. Fu**itall.”

The artist said the range of reactions to her larger-than-life Viagra sculpture has been very amusing - to her anyway.

One man who received it as a gift was insulted and returned it to the gallery in Carmel, California that sold it.

“Some people have a good sense of humour. And some people don’t,” she said. 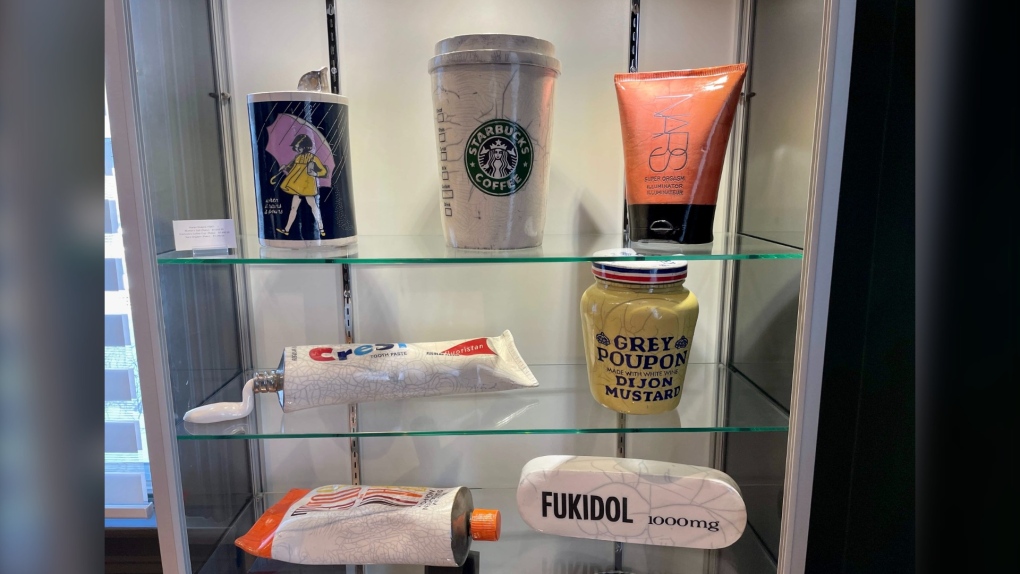 The pandemic was also somewhat responsible for the Elca London Gallery’s move out of Montreal and its reinvention, but so was the sad state of the city and people’s changing tastes in art.

After occupying several prestigious downtown and Old Montreal addresses in Montreal for more than 50 years, London said he decided to stop “swimming against the current.”

When his lease was up at the end of December 2021, he packed up and is now setting up a different kind of gallery on a floor of a large home in Knowlton.

His parents founded the business in 1960 in the basement of their home, before finding success and moving to more picturesque surroundings over the years.

“They had a lot of artist friends and in the late 50s, early 60s there wasn’t really a lot of opportunity for young artists in Montreal, there weren’t a lot of commercial art galleries,” London explained.

Around the time of Expo ‘67, the Londons rediscovered Inuit art and began representing Inuit artists, as well as young contemporary Canadian, American and European artists.

“All the way up to Picasso and Chagall and Miro,” said London.

But times have changed. Despite his passion for Inuit paintings and sculptures, the sale of Inuit art has declined over the last couple of decades.

“The decline of Montreal’s downtown core, a business in decline with an aging clientele base,” no parking, and expensive downtown leases, are just a few reasons London cites for leaving Montreal.

He said he'll follow his muse as he develops the latest iteration of the gallery in a different part of the province while keeping the name of his parents' six decades-old business alive.