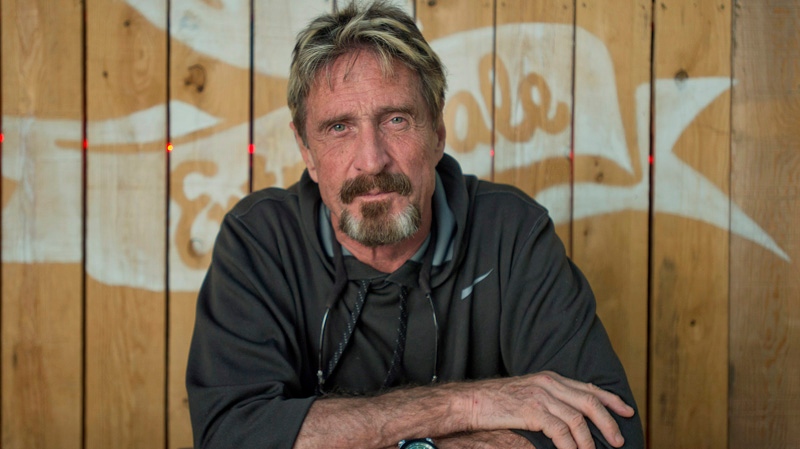 MONTREAL -- American software mogul John McAfee appears relaxed at a downtown restaurant as he digs into a bowl of poutine, but says even the safe haven of Canada isn't immune from government spying.

"Your Canadian government has all of the facilities that the American government has, no more, no less," he says, in light of recent leaks by whistleblower Edward Snowden.

"If you think that the Canadian government is somehow morally or ethically or in any other way superior, you're wrong."

Ten months ago McAfee, 67, was a fugitive from the Belize government, wanted for questioning in the mysterious death of his neighbour Gregory Viant Faull, 52.

After a failed political-asylum claim, two faked heart attacks and a criminal charge for illegally entering Guatemala by speed boat, he was deported to the U.S., ending what became a network television spectacle.

McAfee is in town to work on a forthcoming biographical documentary, produced by a Montreal-based company, Impact Future Media.

"The food is spectacular, the diversity, the people are extremely friendly."

With frosted brown hair and a bushy goatee, he looks part tech-wiz, part punk-rocker. He says his mistrust of the government was hard-earned at the namesake company he founded and later sold for millions.

"From my experience at McAfee, I know for a fact the government knows almost everything about the average citizen."

As an anti-virus software tycoon at the head of McAfee Security, he says his early clients ranged from the CIA to the American navy and air force.

"The first six years of McAfee, 90 per cent of our income came from the government. The First Gulf War I donated $40 million worth of software to the U.S. Army," he says.

"Obviously, I know a great deal about the internal machinations of power structures."

Revelations from the leaks by Snowden show major American technology companies like Google, Yahoo, and Facebook turning over the personal transmissions of their users to the intelligence service.

McAfee says he received similar pressures from the government when he wanted to add encryption technology to his software.

"I talked to the people that I knew within the government: the CIA, the FBI, and everybody else. They all go: 'No, no. We'll shut you down if you do that."'

McAfee said intelligence officials were worried that encryption technology would get out of the U.S. and into the wrong hands.

"And you think Yahoo and Google and others don't have (pressure) to a much greater degree than me? With me it was just some encryption software."

Contact with the mysterious intelligence apparatus protecting and surveying Americans has prompted McAfee to take precautions.

McAfee also says the growth of electronic currencies like Bitcoin is unstoppable, despite efforts by governments to curb their use.

"Things like Bitcoin are completely outside the control and the knowledge of anyone."

To his mind, anyone who does not seriously consider electronic currency as a mode of currency exchange is "doing themselves a misservice," given its encrypted and algorithmic protection from thievery.

McAfee says he never enters his name into his personal computers and often uses software techniques to hide his IP address on the Internet.

"Is that paranoia? I don't think so given the fact that we know the government is spying. It's not that I'm doing anything I don't want the government to know about," he says.

"Why should they be looking at me?"