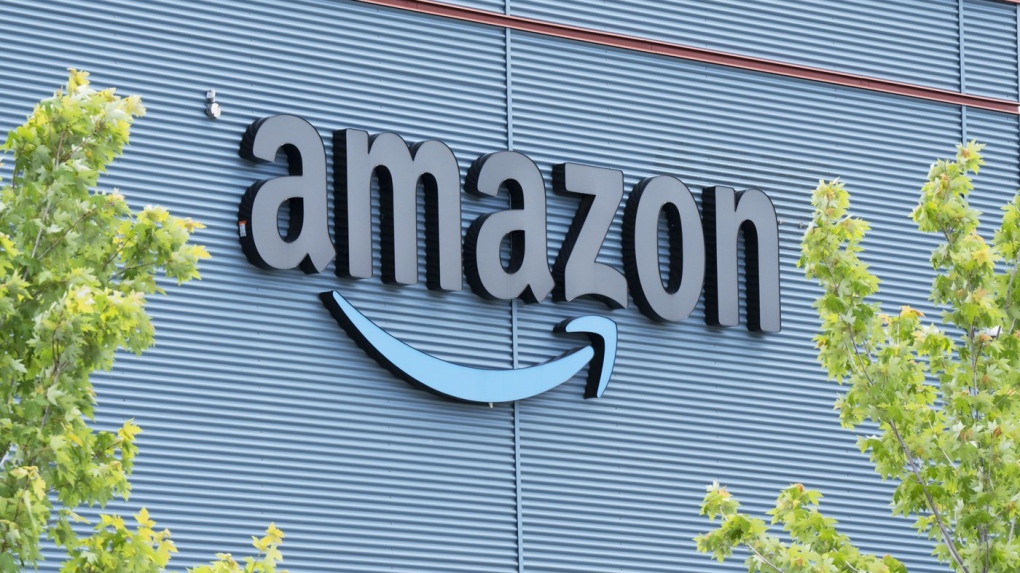 Signage on an Amazon warehouse is seen Wednesday, June 8, 2022, in Montreal. THE CANADIAN PRESS/Ryan Remiorz

A major labour union in Quebec is calling recent action by the management of an Amazon warehouse in Montreal "tactics of intimidation and harassment" that interfere with a recently launched unionization campaign.

Photos viewed by The Canadian Press of the Montreal warehouse's employee break room show posters plastered on each of the transparent walls that divide the dining tables.

"We encourage you to speak for yourself," the posters say. "We do not believe that we need a third party between us."

The company has sent text messages -- also viewed by The Canadian Press -- to employees' personal phones, telling them they have the right to decide whether to sign a union card or an online petition. "It is your fundamental right to sign or to say, 'No, thank you,' or 'I am not interested,"' the text messages say.

Under Quebec's Labour Code, an employer has free speech rights but is not allowed to interfere with a unionization campaign, nor is it allowed to issue threats or promises. It cannot use its authority to induce employees to adopt its views. And employees must have the option of receiving or not receiving the employer's messages about unions.

Frederic Pare, a professor of labour rights at Universite du Quebec a Montreal, says Amazon's strategy of posting notices in the break room and sending text messages "could be problematic" if it becomes overwhelming.

"It's a question of balance," Pare said in a recent interview. Amazon's approach, he added, reflects an American mentality that won't fly in Quebec.

"Amazon comes here … but they have an old American way of doing things where the employer has more leverage," Pare said. "Here … with unionization, employers don't have a say."

Bergeron-Cyr said workers reached out to his labour federation earlier in April and launched an organizing drive, in part, for higher wages, which he said hover around $17 or $18 an hour. Unionized workers in comparable factory jobs in the province make between $26 and $30 an hour, he said.

"The workload and pace of it all are insane," Bergeron-Cyr said. "People are under pressure .… A lot of them are immigrants who don't know their rights, and Amazon uses that to its own advantage."

If more than half of the 250 to 300 employees at the warehouse sign a membership card, the Quebec labour relations commission can certify the union.

Several workers, whom The Canadian Press agreed not to identify because they fear repercussions at work, described what they said are Amazon's clear attempts to prevent unionization. All spoke of managers' efforts to separate groups of workers talking about the union and of oral threats to close the warehouse if they unionize.

One worker said his life has become miserable since he uttered the word "union" at work. "Every co-worker who talks to me, after a few seconds, they are interrogated by the manager. When they do that, people don't want to talk to you anymore. I'm being isolated," he said.

Another worker said, "Most people you talk to think we deserve more. But they don't want to sign the union card because they're afraid that the company will know that they did and will fire them."

Amazon Canada spokeswoman Ryma Boussoufa said in a statement that the company doesn't think "unions are the best answer for our employees." But she added: "No person in our organization will ever force, intimidate, threaten, make promises or unduly influence our employees' decision to join a union, or not join a union, and any allegations of this nature are simply unfounded."

Several groups of workers from Amazon warehouses across the world, including in Montreal, have reported difficult working conditions that include 10-hour shifts and the need to package products quickly, which they have said leads to injuries. They have also reported that managers overwork employees in order to get bonuses and that the warehouses are equipped with intrusive surveillance systems.

When asked about allegedly poor working conditions, Boussoufa said Amazon strives for a culture of safety, and she listed the benefits offered by the company, such as dental care and tuition subsidies.

Barry Eidlin, an associate professor of sociology at McGill University and author of the 2018 book "Labour and the Class Idea in the United States and Canada," said the workers' allegations aren't surprising, adding that Amazon's alleged workplace abuses and its anti-union stance have been well-documented.

"This is just the company culture: viciously opposed to any attempt at workers to have independent control in the workplace," Eidlin said in a recent interview.

The pandemic, Eidlin said, exacerbated the problems in warehouses because of the explosion of online orders -- but it also engendered a widespread unionization movement. "It's an after-effect where people realized that Amazon prioritizes its products and profit over employees."

In April, employees at one Amazon warehouse in New York City pulled off the first successful U.S. organizing effort in the retail giant's history. Workers at a second facility in the city, however, voted overwhelmingly against unionizing. Meanwhile, other unionization efforts are underway at Amazon sites in Alberta and Ontario.

"It's going to be a tough fight," Eidlin said.

Thinly stretched rescue teams worked through the night in Turkiye and Syria, pulling more bodies from the rubble of thousands of buildings toppled by a catastrophic earthquake. The death toll rose Wednesday to more than 9,500, making the quake the deadliest in more than a decade.

Federal Health Minister Jean-Yves Duclos will ask the provinces today whether or not they intend to accept the new health-care funding deal tabled by the prime minister.