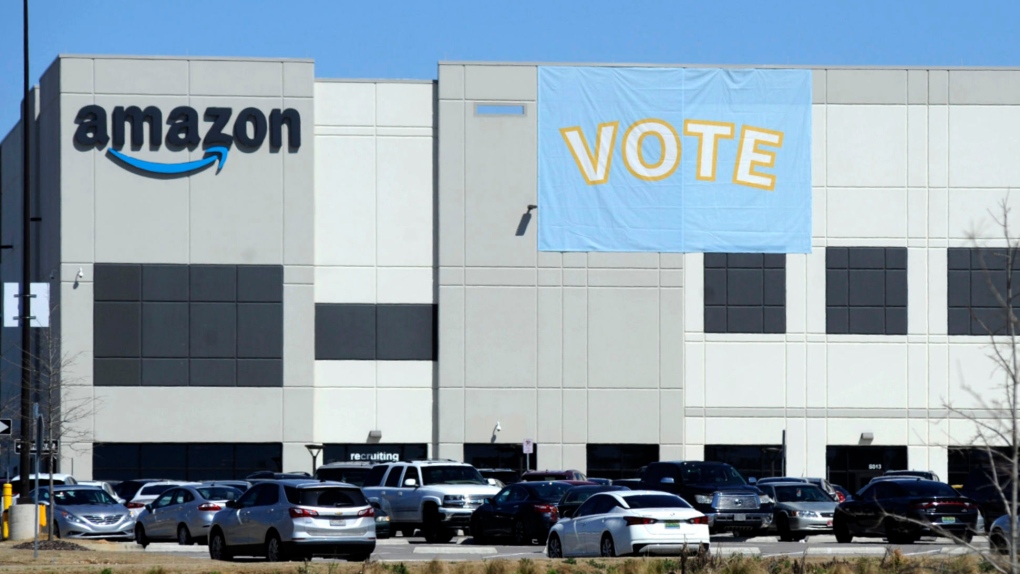 An Amazon fulfillment centre in Bessemer, Ala., is shown on Thursday, March 10, 2022. (AP Photo/Jay Reeves)

A unionization campaign is underway at an Amazon warehouse in Montreal as one of North America's largest employers stares down more labour drives -- with only one successful so far.

The Confederation des syndicats nationaux (CSN) says workers reached out to the union earlier this year and launched an organizing drive on site last month over health and safety issues as well as salary, which hovers around $17 or $18 per hour. Unionized workers in comparable roles typically make $25 to $30 an hour, it said.

If more than 50 per cent of the 250 to 300 employees at the warehouse sign a membership card, the Quebec Labour Relations Commission can certify the union.

CSN vice-president David Bergeron-Cyr says workplace health and safety is a key reason behind the push.

"It's like a jungle in there, a lot of people are getting injured," he said in a phone interview.

"Most of them are first-generation immigrants and they don't know their rights and don't speak French. They don't go to the CNESST -- our health and safety commission -- to get paid."

Some employees are expected to lift up to 400 boxes an hour, resulting in unreported injuries and lack of compensation for time in recovery, Bergeron-Cyr claimed.

Amazon Canada spokeswoman Ryma Boussoufa said the Seattle-based e-commerce giant doesn't "think unions are the best answer" for employees, but that the choice lies in their hands.

"Our focus remains on working directly with our team to continue making Amazon a great place to work," she said in an email.

The unionization effort comes as organizers look to hold a vote on certification at a 7,000-employee Amazon packaging facility in Nisku, Alta.,

Teamsters Local Union 362 said last week it had filed a second time for a unionization vote at the facility south of Edmonton.

The application must be certified by the Alberta Labour Relations Board before a vote can take place.

Teamsters Canada attempted to form a union at the Nisku Amazon site last fall, but was unable to get the proposed vote certified after the labour relations board concluded it had failed to reach the required threshold of signed union cards.

The parallel Canadian campaigns also come as organizers struggle south of the border to build on their single successful union bid at a New York City warehouse last month.

Amazon workers at a second Staten Island location overwhelmingly rejected a union bid on Monday, dealing a blow to organizers who last month pulled off the first successful U.S. organizing effort in the tech company's history.

For the fledgling Amazon Labor Union, Monday's defeat will surely sting. A second labor win was expected to fuel more organizing at the United States' second largest private employer -- after Walmart -- and cement the power and influence of the ALU.

This report by The Canadian Press was first published May 3, 2022.

About half of Americans say Trump should be charged for U.S. Capitol riot: poll

About half of Americans believe former U.S. President Donald Trump should be charged with a crime for his role in the U.S. Capitol attack on Jan. 6, 2021, a new poll shows.

'We cannot pause our lives': Ukrainians begin rebuilding amid war with Russia

Ukrainians are gradually returning to life a few months after Russian troops retreated from the northern Chernihiv region. Now, people are repairing homes, and the sound of construction tools fills the air. Volunteers from all over Ukraine, and from other countries, are coming to help because there is so much to do before another winter approaches.