After 41 years, Sears Canada employee fears for his future

Employees from Sears Canada are concerned about job losses and their pensions after the company announced plans to close its remaining 130 stores.

One of those employees is Trevor Gibbons. His first day at Sears was in 1976.

“(That’s) 41 years, and there are people who have been there longer than me,” he said,

Gibbons expects to be laid off any day.

“We're told we'll be receiving letters with our own personal information and also our last day of work here. So you know they won't even come to you face to face and let you go,” he said.

He’s disappointed, but is also worried about his severance and pension.

“If they can raise enough money from the clearance sales, then there’ll be money left over among the defined pension people. But will they have enough,” he said.

As far as severance goes, Switzer said, “I think it's going to be a difficult, even for those employees working for as many as 30 years, to get anything out of the deal.”

Employees likely won't get much of their pensions either, he said – only what they contributed.

“Sadly they probably won't, which is troublesome, the morals the ethics, but that's the law,” he said.

In total, about 12,000 employees would be affected, not including the 2,900 job cuts Sears Canada previously announced in June.

They could go to court, said Switzer, but that would take years.

“If they decide to go to court it could take eight years to solve this problem in Canada,” said Switzer.

The court overseeing Sears Canada’s operations will hear a motion on Friday seeking approval to close the 130 stores, meaning it could begin liquidating in the coming weeks.

“It's extremely frustrating and it's wrong,” said Gibbons, who said he doesn't know what he’ll do next. 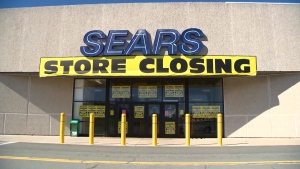 Timeline: The rise and decline of Sears Canada