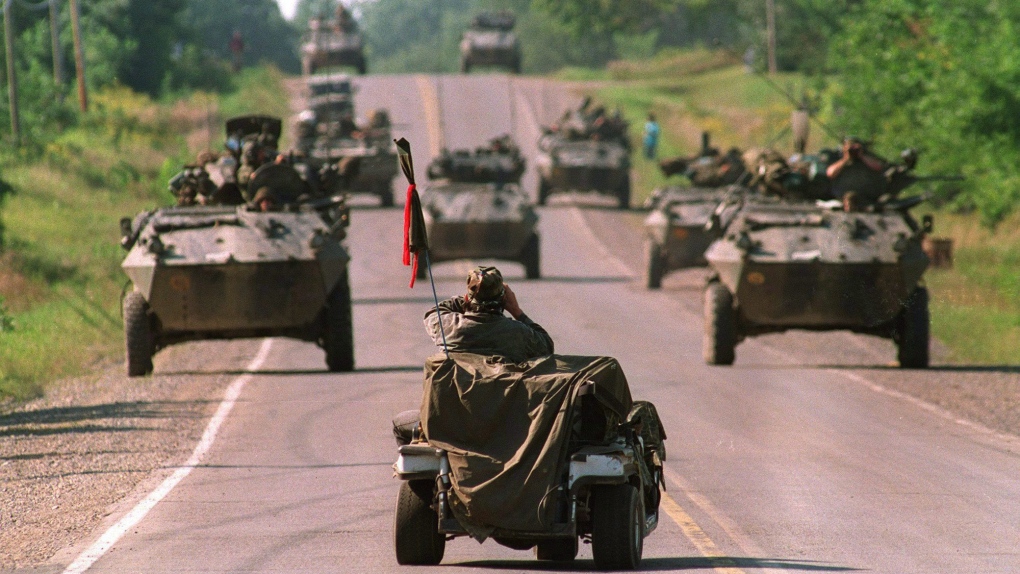 OKA, Que. -- It was a crisis that grabbed international headlines, with armed Mohawks and Canadian soldiers involved in a lengthy standoff that often appeared on the verge of exploding into full-blown combat.

Twenty-five years on, the legacy of the Oka Crisis for many of those who experienced the tension west of Montreal is a greater awareness of native issues.

Native activists, artists and professors say while it's difficult to draw direct links, the Oka uprising in 1990 inspired First Nations movements across the country such as the Idle No More protests in 2012 and the ever-increasing calls for a federal inquiry into missing and murdered aboriginal women.

University of Ottawa professor Marcelo Saavedra-Vargas, who specializes in the studies of indigenous peoples, called the Oka Crisis "an awakening" heard around the world.

"I can tell you -- from my own experience -- that the indigenous social movements in Bolivia, which ended up bringing an indigenous person to the presidency, were also inspired by the Oka events," he said in an interview.

Saavedra-Vargas added that at powwows and other celebrations around the continent, "you can always meet Mohawk Warriors talking about how they are proud of what happened. They keep the memory alive."

When the town of Oka decided in 1990 it was going to allow the expansion of a golf course on disputed territory -- including on a Mohawk burial ground -- people living in the neighbouring Mohawk community of Kanesatake rose up in defiance.

In response to the council's decision, Mohawks barricaded a dirt road leading to the golf course.

After they refused to obey a court injunction to stand down, a shootout ensued with provincial police officers and resulted in the death of Cpl. Marcel Lemay on July 11.

Where the bullet came from remains a mystery.

The Quebec government called in the Canadian Forces and roughly 800 members of the Royal 22e Regiment encircled the Mohawks in the pines with barbed wire.

"(Premier Robert Bourassa) called us into his office the day after (the shooting) and told us -- he made it clear, he didn't want any more death," Sam Elkas, who was Quebec public security minister at the time, said in an interview.

After 78 days of negotiations, both sides struck a deal: the barricades made of dirt and mangled police vehicles were to come down in return for the cancellation of the golf course expansion.

The disputed territory remains an unsettled issue, however, and was never officially ceded by the Mohawks or handed over to the native community by federal or provincial governments.

"You reach a point after a while where you have to make a stand," Kanesatake resident Linda Simon, who experienced the violence, said in an interview.

"The common lands had slowly been given away and sold and there came a point where people weren't going to take it anymore."

The 1990 events led to the Royal Commission of Aboriginal Peoples, which helped usher in new agreements between natives and non-natives such as the resource-sharing deal in 2002 called the Paix des Braves (Peace of the Braves) between the Quebec government and the Grand Council of the Crees.

Alanis Obomsawin, an award-winning filmmaker who made a much-praised documentary about the conflict called "Kanehsatake: 270 Years of Resistance," said the events of 1990 inspired native people across the country and raised awareness among Canadians regarding land claims.

"When I go out West, (aboriginal) people tell me, 'Alanis, we could never thank the Mohawks enough for what they did."'

"Back then I think we would have acted more unilaterally," he said.

Kelley mentioned provincial funding for the Kateri Memorial hospital on the Kahnawake reserve south of Montreal -- which he said required several bureaucratic hurdles to overcome such as modifications to labour laws -- as an example of a change in government attitude toward native people.

"It's a small example but a good one to show how we are adapting our institutions with native realities and I think they will bring great benefits in the future," he said.

But while native people have received more respect from non-native governments since Oka, there are many outstanding land claims across the country, and some Canadians still harbour prejudices against Aboriginal Peoples, Kelley said.

Tom Siddon, federal minister of Indian affairs and northern development at the time under Brian Mulroney, said he believes Oka played a key role in improving the thorny issue of land claims.

"I think we were able to make some major progress and I do believe that Oka was an important turning point in our natural history," he said in an interview.

The current grand chief in Kanesatake says that while the Mohawk Warriors might have inspired people around the world, the aftermath of the crisis led to the "social disintegration of the community."

Serge Simon said it has taken a generation for people to overcome the trauma of the crisis and band council politics have only recently started to calm down after years of tension and sometimes violence between community members.

Simon said the 25th anniversary of the crisis has forced difficult memories to the surface including what he called human-rights abuses he alleges his people suffered at the hands of the provincial police.

"(The provincial police) took my cousin Angus Jacob and brought him to the back of a barn and handcuffed him to a metal chair," he said in an interview.

"They pulled his pants down and they started electrocuting his testicles to get him to talk."

He said events like Oka can happen again in Canada but it's critical that natives and non-natives continue to talk to one another.

"Oka is what happens when dialogue stops," he said.