A year since agreements expired; unions in Quebec plan to demonstrate 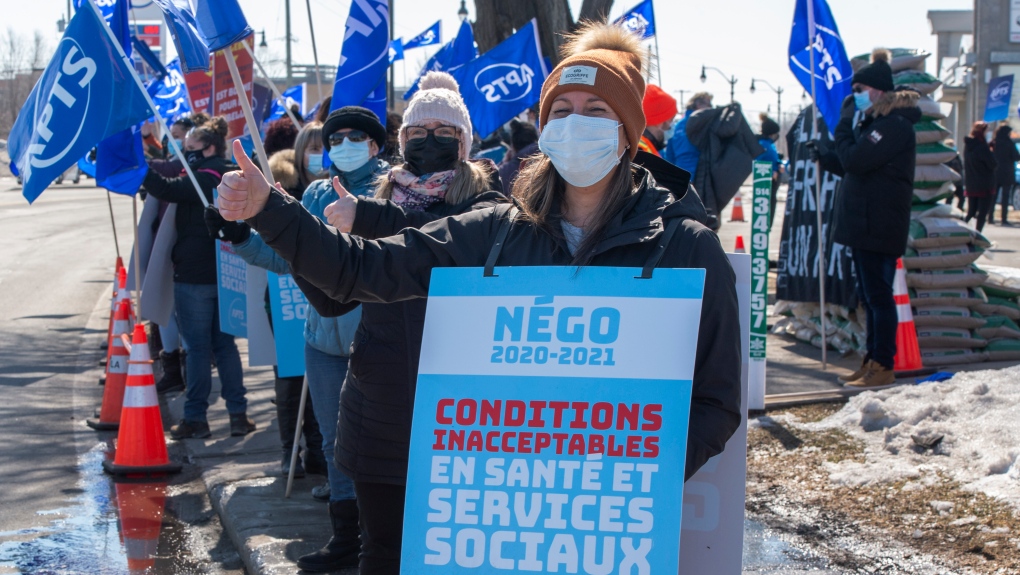 MONTREAL -- A year after the expiry of the public sector collective agreements, and while Quebec City has just called the main union organizations to a meeting on Tuesday, unions are preparing a number of major actions spread over a few days.

The whole thing should culminate in two large inter-union demonstrations on Wednesday.

In the meantime, union organizations announced on Friday that some of them had been called to a meeting with president of the Treasury Board Sonia LeBel this Tuesday evening.

Leaders of the CSQ, CSN, FTQ, FIQ, APTS and FAE have been summoned.

The invitation comes one year after the expiry of the collective agreements that concern half a million government employees, on March 31, 2020.

Since then, unions have reported little or no progress.

The pressure is mounting, with strike votes popping up here and there. Tuesday's meeting is, thus, timely.

To mark the "anniversary," eight major public-sector unions and centrals will demonstrate together on 31 March in Montreal and Quebec City.

Despite the absence of a common inter-union front this time, the CSQ, CSN, FTQ, FIQ, APTS, SPGQ, FAE and SFPQ will be united to deplore the lack of progress in their negotiations.

Before these large inter-union demonstrations on the 31st, the FTQ, for example, has planned car convoys that will converge on Quebec City on the 30th, and visits to some ministers to question them on the 29th.

All of this while respecting health regulations.

It was the government which, in March 2020, convened the union organizations in Quebec City to propose that they conduct accelerated negotiations so that it could then concentrate its energies on managing the pandemic.

Some of them agreed to this, while others covered their ears.

"We all said yes. Now, nothing or almost nothing has happened at the negotiating tables since March 15, 2020, and I think that's a real shame," said FTQ president Daniel Boyer. "If Mr. Legault had wanted us to sign on March 15, 2020 the proposal he made in December 2019, we should have been told because that's not what was proposed to us; it was proposed to us to negotiate."

"So far, the government has never budged from its original fiscal framework, and there are hardly any discussions either. It's been radio silence for months on the part of the government," Boyer.

He points out that economists are increasingly talking about an inflationary surge, which makes these offers of pay rises even less appropriate.

Yet the public sector has problems attracting and retaining workers such as nurses, teachers, education professionals, and youth centre workers.

Skilled workers are also paid much less in the public sector than in the private sector.

At present, strike mandates that have been obtained by some organizations, such as the CSQ, are limited to the education sector. But the APTS, whose members work in health and social services, will soon consult its members on a 10-day strike mandate.

The FTQ is toying with the idea.

"We're wondering if we won't go looking for strike mandates in the health sector," said Boyer. "We may be in a pandemic here... We're not looking to go on strike; that's the last thing we want to do. But, at the same time, what recourse do we have? Are we going to wait for the government not to move? It's not moving. We are negotiating with ourselves, as we speak."

Only the Fédération interprofessionnelle de la santé (FIQ) has managed to reach a partial agreement in principle, which deals with working conditions, not wages.

The FIQ's agreement, which should make it possible to create more full-time and attractive positions and thus reduce the TSO (mandatory overtime), has not yet come into effect, since negotiations with Quebec have not been completed for it either.