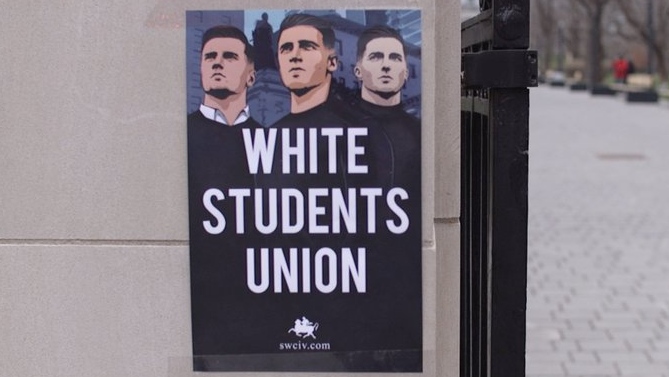 MONTREAL -- A self-styled “white students’ union” that has had run-ins with several Toronto universities says it’s setting up a chapter at McGill University in Montreal.

While the group has put up recruitment posters around McGill’s campus, however, there’s little evidence it has gained momentum—a typical pattern, say some who have followed it and who question whether the supposedly multi-branched “student group” is much more than a single man in his 30s.

The organization, called Students for Western Civilization, is run by Toronto man George Hutcheson, who’s worked with many figures in Canada’s far-right media and who recently appeared in a documentary on white nationalism.

Hutcheson told CTV News that the group “seeks to affirm the rights, interests and identity of European-Canadians” by, among other things, “fighting anti-white hate speech” and “preserving and enhancing our cultural heritage.”

He said the organization is applying for official status at McGill as a student group, but the student society that approves such requests said it hasn’t received one from him, nor is it considering authorizing one if it does.

“We aren’t aware of any recruitment efforts aside from the posters that had been put up around campus, but we can confirm that the so-called ‘White Students Union’ is not recognized by or in any way affiliated with the [Students’ Society of McGill University],” said a statement emailed by SSMU’s spokesperson, Brooklyn Frizzle, on Wednesday.

“These messages do not align with the values of the SSMU,” the statement said.

In a statement, McGill’s administration said it “fully respects freedom of speech” but “will remain vigilant to ensure that all members of our community feel safe, welcomed and respected on our campuses.”

The Students for Western Civilization made the announcement on Monday, posting on its blog that it would be setting up shop at McGill.

“Canadian universities like McGill have many ethnicity-based student groups, but none which defend the special interests of white students,” said the post.

It said that Canadian students are “indoctrinated” with “anti-white” messages, providing a bullet-point list with some of the perceived messages.

It also claimed there’s a widely held belief “that white people are “privileged,’ and our status, wealth, property can therefore be justifiably appropriated.”

It invited McGill students to apply for the group but warned that “if you join us…you’ll be ostracized; slandered and attacked,” also saying “our ethnic group is persecuted.”

Two and a half days later, the post had only 30 likes. The group also posted a photo on Twitter showing a poster with a stylized image of three white men and the words “WHITE STUDENTS UNION” plastered on what appeared to be a McGill campus building.

In an email, Hutcheson claimed that the group picked McGill as the site of a new chapter at students’ requests.

“We chose McGill because we were contacted by five students there who wanted to start a branch,” he wrote.

“So far, we’ve received 11 new applicants, but they haven’t gone through our admission process yet.”

However, Hutcheson said that there is no local person heading the Montreal chapter, and that he would be “their representative.”

The group would ideally follow a calendar he claimed was established in Toronto, he said.

“In Toronto, our regular activities include a monthly academic meeting which is structured like a university tutorial, as well as a monthly social meeting. We will follow the same model in Montreal,” Hutcheson wrote.

“If we can obtain official status at McGill, we will also hold conferences there and bring in speakers.”

Hutcheson said that application was in the works, adding in a second email that CTV News should consult [SSMU] for comment as “they've already emailed us.”

Frizzle, the SSMU spokesperson, said nobody from SSMU’s executive had emailed him and that no authorization process is underway.

However, an odd email chain seemed to clear up the confusion. Someone had contacted the Students for Western Civilization through its standardized website form and had typed in a SSMU address—which doesn’t mean the writer actually had access to that email address. The writer went on to write a critique entitled “You’re Unwanted at McGill.”

Hutcheson treated this as an official correspondence from SSMU and “responded” to the real SSMU executive with it, saying “we…appreciate your candor,” though the SSMU executive had been unaware of the entire exchange. The email chain was shared with CTV News.

In its statement to CTV, SSMU said it is very concerned by the idea the group could try to come to campus.

“The Executive Team is approaching this matter with the utmost seriousness and, in the interest of centring the experiences of People of Colour and not giving a platform to hateful dialogues, we are making every effort to resolve this situation swiftly and quietly,” it wrote.

A New York-based documentary filmmaker who spent time with Hutcheson said that despite the “really silly” appearance of his group to many people, it shouldn’t be underestimated.

“He knows what he’s doing,” said Daniel Lombroso, the director of the documentary “White Noise,” released this summer, about the global rise of the white nationalist movement.

“He’s basically going to use the student group as a way to radicalize college students,” he said.

Hutcheson has appeared in Canadian media on and off for years. His group did a similar postering effort at several of Toronto’s universities in 2015 and 2017, sparking a backlash.

Hutcheson has also worked with far-right political activist Faith Goldy, according to Lombroso.

His documentary followed far-right media personality Lauren Southern, who was dating Hutcheson at the time of filming.

Lombroso accompanied the two of them on a date in Toronto in 2018, learning that Hutcheson is a “culinary white supremacist” who refuses to eat “non-white” food, including, according to the film, ketchup—since Hutcheson believes ketchup originated in China.

Lombroso said Hutcheson was 30 at the time and is now about 32, and that he never mentioned where in Canada he grew up.

He wasn’t himself a student, and there was little evidence at the time that his student group was a busy network, Lombroso said.

“It didn’t seem like he had his hands full with work, is the best way I could put it,” Lombroso said.

But he said Hutcheson is fluent in the language and aesthetic of the new white nationalism movement, from his haircut to the slick retro-looking campus posters.

It can also easily appeal to “disaffected” students who are out of work and susceptible to the idea that the problem isn’t the economy or the pandemic but that “people are conspiring against you as a white man,” Lombroso said.

But as his documentary examines, the idea that being white is in itself a culture or even an ethnicity is an invention, Lombroso said.

“If he wanted to start a German culture club or a French culture club, no one would stop him. He can do that,” he said.

“The idea of whiteness as… an ethnicity is something that's never existed in history and has risen now as a way to preserve white power in the U.S. and Canada.”

Lombroso happened to attend McGill himself, as an international student, and said that hearing Hutcheson was trying to recruit there alarmed him.

“It’s scary picturing him on campus doing that, because it could work,” he said. “It really could work on people.”