MONTREAL -- Thankfully, eight-year-old Milah Johnson replies with a firm “no,” when asked if she remembers anything about her three-week ordeal in the pediatric intensive care unit at the Montreal Children’s Hospital in late February.

But her mother won’t soon forget how sick her daughter was and how quickly the post-COVID-19-related illness progressed.

“It was really, really nerve-wracking because we’re in the observation room after triage and I actually called out for help,” said Laurieann Roberts.

Milah had a high fever and was hallucinating, said Roberts.

Today, even as many Quebecers are looking forward to a summer with high vaccination rates and many fewer cases, Milah is still dealing with lingering health issues.

Meantime, her mother is trying to connect with other families who also know what it’s like when an invisible case of COVID-19 is linked to a frightening cascade of symptoms down the road

NOT AN OBVIOUS DIAGNOSIS

It took some time and surgery before Milah was officially diagnosed with multi-system inflammatory syndrome in children(MIS-C), a condition where different body parts and organs become inflamed, two to eight weeks after a child tests positive for COVID-19.

The condition is also sometimes referred to as pediatric inflammatory multi-system syndrome (PIMS).

For Milah, it started when her “stomach really felt weird like my insides were shaken up,” she said. She soon developed a fever and vomited.

Once in the emergency room, doctors first concluded that Milah was suffering from appendicitis and recommended immediate surgery. But it turned out the inflamed appendix was an early symptom of a bigger problem that worsened once Milah got back home.

“When I called the hospital again...I said 'I find her stomach is quite hard, just nothing is getting better, and she still has a fever,'” Roberts said.

Round two at the hospital, and a different type of COVID-19 screening test “picked up low amounts of the virus.”

Roberts learned for the first time Milah had at one point had an asymptomatic case of COVID-19.

“So that really surprised us,” said Roberts.

She was equally taken aback by the speed with which Milah was then transferred to a restricted ICU COVID-19 room, as the eight-year-old girl’s blood pressure plummeted, and her complete diagnosis became clear - MIS-C.

Roberts and her husband began to learn more about how Milah might be affected and how doctors would treat it.

She was also asked about their ethnicity, and once she was directed to the Canadian Pediatric Society’s (CPS) website, realized why that was, she said.

“They said within the small percentage of children who get PIMS, the majority are of Afro-Caribbean,” Afro-American and Hispanic descent.

“So, this was something that also kind of alarmed me but with all the research and everything that’s being collected,” Roberts said, it was wonderful the information is being pooled to help children get the help they need.

The CPS reports “it is unclear whether this (higher incidence among certain groups) is attributable to differences in genetic, socioeconomic, or exposure risk factors.” 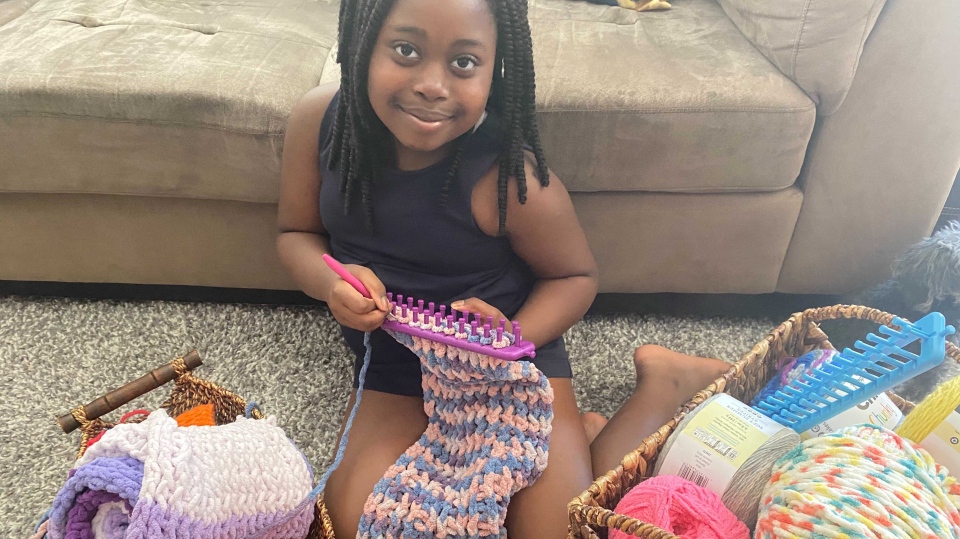 Milah began having seizures in the ICU and “she was unable to talk,” said her mother, who described her as “a superhero."

“I didn’t know how strong she was,” said Roberts.

The doctors turned to everything they’d learned throughout the pandemic to help her, including “that corticosteroids [have] a significant place in the treatment... so we start those earlier,” said Dr. Rosie Scuccimarri, a rheumatologist at the Montreal Children’s Hospital who diagnoses and treats patients with MIS-C.

The treatment was effective and Milah was sent home to recover, but not without some lingering medical issues involving adrenal gland functioning and seizures that continue to be investigated.

The stress and strain took a toll on Roberts as well. Not only was it difficult to be a mom and have a daughter who was so ill, but as a businesswoman who runs a daycare, Roberts “had to wear both hats,” which she says was “really hard.”

As a result, she decided to start a Facebook group called ‘PIMS MIS-C support Quebec,’ with another Montreal mother who’s been down the same road so they can share their experiences.

“It’s amazing to reach out to each other and help each other through,” said Roberts.

Milah made it out the other side with great resilience and is back to lots of regular activities.

“I like to hula hoop, and I have my own company,” she said - it’s a small knitting operation named BundL UV scarves.

She donates the proceeds of any sales of the vibrantly hued scarves she creates to the Montreal Children’s Hospital as a way to thank them for the care she received.

VACCINATION AGAINST COVID-19 AND CHILDREN

While COVID-19 vaccines haven’t yet been approved in Canada for children under the age of 12, Scuccimarri said if they do get the green light, the message will be for children to “get vaccinated. I think that’s the key thing.”

Teenagers tend to become sickest with the post-COVID inflammatory syndrome but the hospital has “seen kids as young as six going to the intensive care unit so there is that age group that’s also affected,” said Scuccimarri.

Approximately one in 1,000 children develop the immune reaction weeks after getting the virus.

“It’s a scary illness and it can be life-threatening. The good thing is that it’s rare and that when it’s picked up early, patients do well,” Scuccimarri said.

Between October to March, the hospital treated six or seven children each month. Now, numbers are down to about two patients per month.

So far, slightly more than 60 per cent of youths aged 12-17 in Quebec have gotten their first dose of vaccine.

“We should see COVID-19 as another infection that we want to eradicate just as we have with polio,” the specialist said.

But some concede it can be a complicated message to impart to parents, especially those who are vaccine hesitant.

Dr. Jesse Papenburg, a pediatric infectious disease specialist at the Montreal Children’s Hospital explains, on the one hand, hospitalizations related to COVID-19 “are nowhere near what we see year-in-year-out due to influenza, for all ages.

”At the same time, “that’s not to say that there aren’t potential important benefits of vaccinating [younger] children, as we get data on both the efficacy and the safety of vaccines against COVID-19,” Papenburg said.

For one, it will help prevent even a single case of MIS-C. It will also help Quebec reach safer levels of immunity on a population level, and will allow for ever-expanding reopening plans while reducing the ability of children to spread the virus to more vulnerable adults, he said.

For adolescents, vaccination allows for “a safer summer in terms of social activities or group activities, whether it be summer camps or sports and then obviously the return to school back in September,” Papenburg said.