MONTREAL -- An outbreak of COVID-19 at the Les Aliments Cargill meat processing plant in Chambly will cause the temporary closure of the Monteregie plant about 30 kilometres south of Montreal.

The employer confirmed in an email that at least 64 workers have been diagnosed with the disease, which represents 13 per cent of the local workforce.

“Since the health and safety of Cargill employees remains our priority, we have decided to close our protein production plant in Chambly, Quebec. Cargill is working in close partnership with local health officials and the union to test our employees as quickly as possible,” said the employer.

In an interview with The Canadian Press Sunday morning in front of the factory, union spokesperson Roxane Larouche said that the factory nurse sent 171 workers home last week as a preventive measure. Of these, 30 have already been diagnosed with the virus.

Three employees have recovered, according to Cargill, which is anticipating that others will soon be ready to return to work.

“What has been decided with public health, in collaboration with Cargill, is that from Wednesday the factory will be closed in order to carry out the tests and the reopening is planned at the time when we have enough workers to restart this factory,” said Larouche.

The UFCW spokesperson emphasized that there has been good cooperation between the employer and the union, as well as with the Monteregie public health authorities.

Several measures had been previously put forward in the hope of avoiding such a scenario, such as the wearing of glasses, a visor and masks by the employees on the production line, as well as the installation of Plexiglas where possible.

Employees' arrival and departure times were also shifted between the different shifts, according to Larouche.

Larouche believes that the contamination of Cargill employees in Chambly could be explained by the presence of members of the same families employed by the factory or of workers who live in the same place.

Les Aliments Cargill will close its Chambly plant as of Wednesday in order to test all its workers Wednesday, Thursday and Friday, according to Larouche.

All union members will receive their wages during this forced break.

“We are granting up to 80 hours paid leave to people who need to take time off work to cope with COVID-19. While the plant is shut down, employees will be paid up to 36 hours - plus the usual benefits, as we want to show our gratitude to our employees,” the company email said.

Unsurprisingly, this decision was welcomed by the union, which will avoid many unpleasant surprises in Larouche's opinion.

“The idea behind that is that we don't want workers to have to choose between their financial health and their physical health. We especially don't want a worker not to reveal his symptoms or to acknowledge that he has been in contact with someone declared positive because he is afraid of losing his salary,” said Larouche.

This is the second time a Cargill plant has had to close in Canada after the High River plant in Alberta shut its doors on April 20 due to the COVID-19 pandemic.

The major slaughterhouse in southern Alberta reopened two weeks later, but several workers objected to the resumption of operations last week. A demonstration organized by their union lifted the veil on their fears regarding health and safety at work.

There were over 900 positive diagnoses and one death attributable to the new coronavirus among the 2,000 workers at this abattoir in Western Canada. 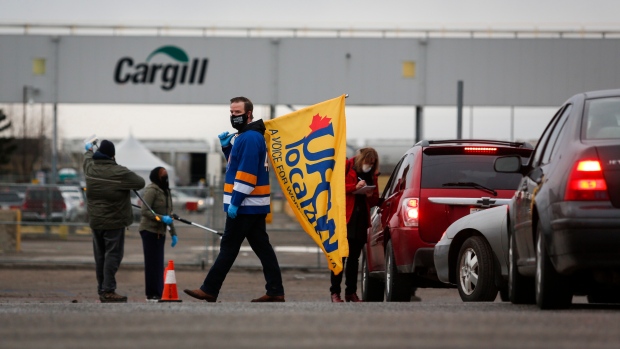