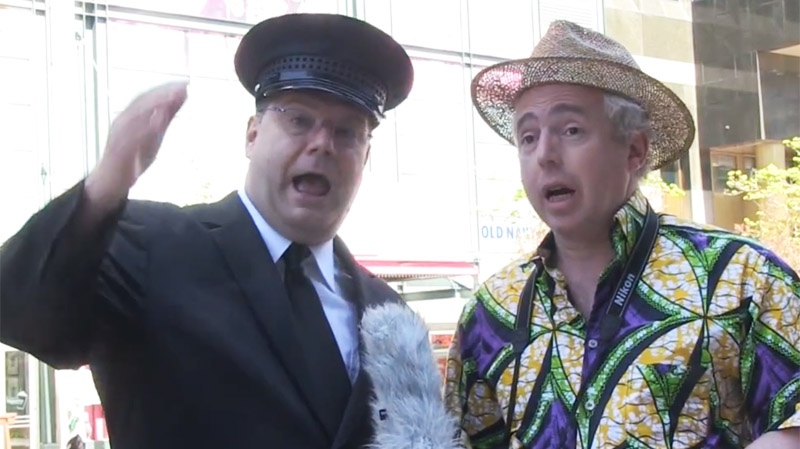 The Mouvement Montreal Francais leaders sported costumes in a video aimed at promoting their walking tour to denounce Anglicization in Montreal.

MONTREAL - Members of the Mouvement Montreal Francais (MMF) strolled downtown Saturday in what it billed a humorous tour to denounce increased Anglicization in the city.

Denis Trudel and Mario Beaulieu of the MMF led followers on a walking tour of places they suggested were hurting the dominance of French in the city.

The tour began at 1 p.m outside Premier Charest's office at McGill College and President Kennedy and visited such spots as McGill University, which it considers an example of overfunding of English-language universities.

They then moved on to SNC-Lavalin's offices to decry the hiring of an Anglophone CEO, while the Caisse du depot and the Federal Immigration Tribunal were also targeted for similar reasons.

The MMF walk was also scheduled to take aim at stores with English names and Revenue Quebec for offering service in English.

The group, in a press release, blamed all levels of government for what it sees as a failure to strengthen and fully enforce the French language charter but blamed the provincial government more than the municipal and federal levels.

In a promotional video posted to YouTube, (see below) one of the guides is seen playing a tourist, who is told that it's difficult to get French service in downtown restaurants.