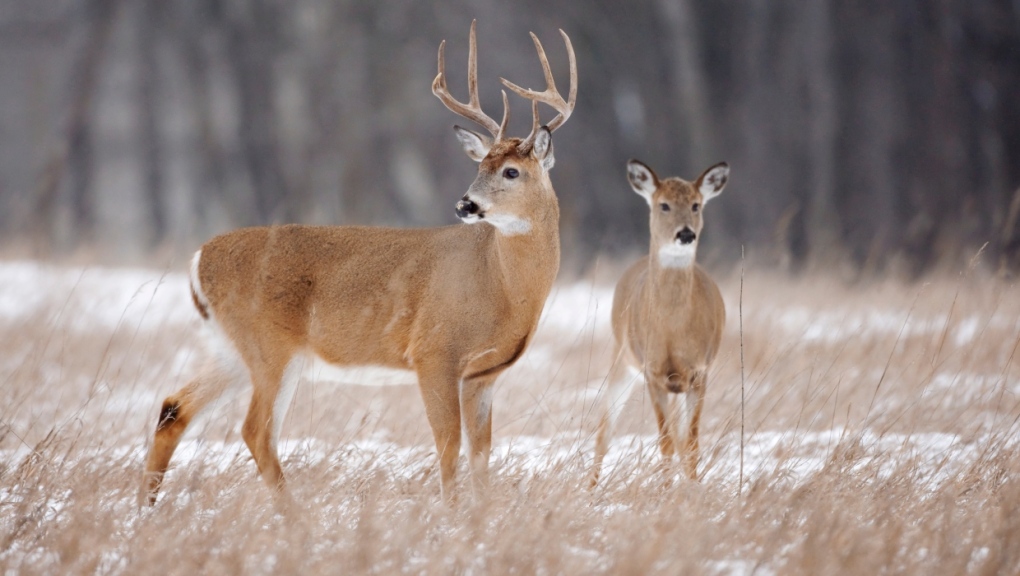 A stock photo of a white-tailed deer buck and doe in snow in southern Minnesota. (Getty Images)

OTTAWA -- The first detections of SARS-CoV-2, the virus that causes COVID-19, in three wild white-tailed deer in Canada have been confirmed in the Eastern Townships.

Environment and Climate Change Canada reported on Wednesday that the samples were taken from the deer between Nov. 6 and 8.

On Monday, the Canadian Food Inspection Agency's National Centre for Foreign Animal Disease confirmed the first detections of the coronavirus responsible for COVID-19.

in the U.S., white-tailed deer tested in four states have already been found to carry SARS-CoV-2.

According to Environment and Climate Change Canada, similar to the U.S. results, deer in Quebec showed no clinical signs of the disease and were "all apparently healthy."

The World Organization for Animal Health was informed Wednesday.

No cases of SARS-CoV-2 transmission from deer to humans have been detected to date, Environment and Climate Change Canada says.

These are the first cases of SARS-CoV-2 infection in wildlife in Canada, and data on the impact and spread of the virus in wild deer populations is currently limited, the release said.

Recent reports in the U.S. provide evidence that SARS-CoV-2 has been transmitted from humans to wild white-tailed deer and subsequent spread of the virus has been observed among deer.

- This report by The Canadian Press was first published in French on Dec. 1, 2021.