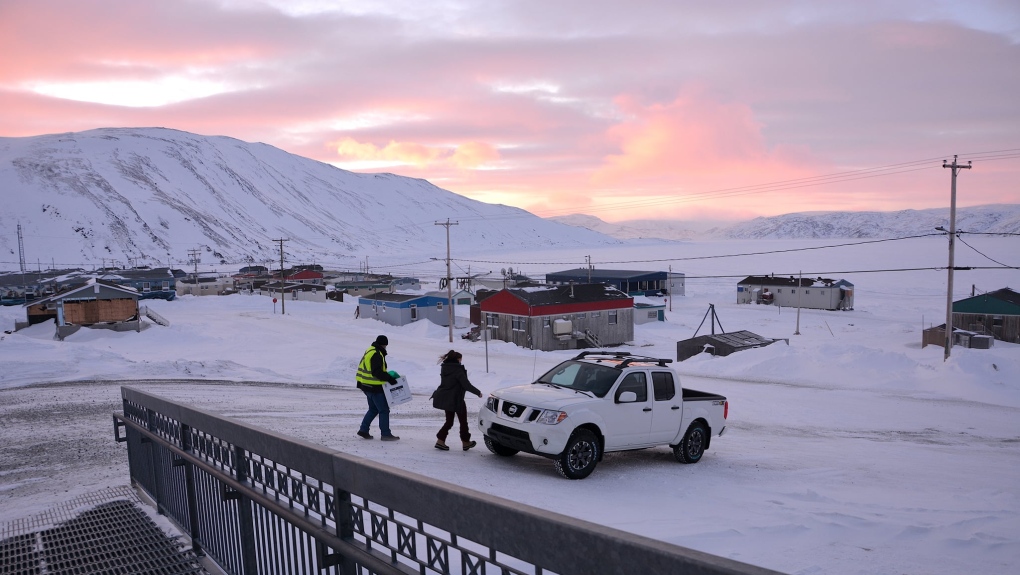 Nunavik receives its first doses of the Moderna vaccine in Jan. 2021, as pictured in Kangiqsujuaq. SOURCE: NRBHSS/Facebook
Montreal -

Very low vaccination rates combined with the arrival of the Delta variant in Nunavik earlier this fall made for a disastrous combination that's gotten steadily worse over the last few weeks.

"Should we have one message to the population, it is that it is not too late to get the vaccine," said Kathleen Poulin, a spokesperson for Nunavik's health system.

"The situation is extremely worrisome and we are in discussions with Quebec's Ministry of Health," she said, to get help with contact tracing, testing and any medical evacuations needed.

Nunavik, Quebec's northernmost region, didn't have a sustained COVID-19 crisis during the pandemic until last month, when numbers climbed so high that most towns went into lockdown and non-essential travel was banned.

Things have only gotten worse since then. On Monday, the region's reported statistics showed that nearly one out of every 75 residents is currently infected, a rate 20 times higher than Montreal's.

As of last week, Nunavik and Quebec health systems were working together "to ensure the effectiveness of service corridors with the [McGill University Health Centre] as well as with medical evacuation preparedness," Poulin said.

VACCINATION RATE ONLY 31 PER CENT IN HARD-HIT TOWN

As of Oct. 17, vaccination rates hovered around 35 to 45 per cent in most of Nunavik's villages, a coverage rate about half of that in the rest of Quebec.

The town of Salluit currently has 198 active cases of COVID-19, the highest number in the entire region.

The town's population is about 1,500 and only 31 per cent have received both shots, according to Nunavik's published data. 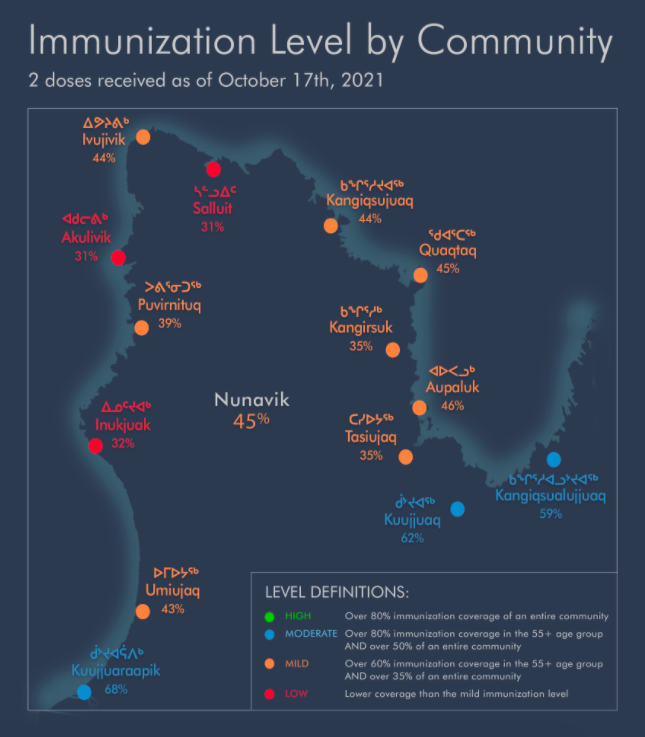 Health authorities have been making "massive communication efforts" to encourage vaccination, Poulin said, but many people are distrustful for reasons that aren't common in the rest of the province.

"From social media initiatives to radio announcements, all local channels have been used to promote vaccination."

As just one example, "there has even been a BBQ event with prizes (respecting the measures in place, of course) for those who went to get the vaccine in Kangirsuk," she wrote in an email.

Public health workers are also trying to do one-on-one meetings with those who are hesitant to talk about their concerns, but the rates are still very low.

"As for the reasons why people hesitate, there are many," Poulin said.

For one, "the COVID threat is seen by many as something external, that can’t touch them, as they are isolated in a remote location," she said.

"For others, vaccination interferes with their religious beliefs."

Some "fear the system" that's offering the shots, she said, while others fear the secondary effects -- one reason that's more commonly heard elsewhere in Quebec.

Harvey Mesher, who runs the biggest Nunavik community Facebook group, "Your Voice on Nunavik," with nearly 8,000 members, said the reasoning of the religious objection isn't quite clear to him, but he does see it come up sometimes on his group.

People who are pro- and anti-vaccination have been arguing in the Facebook group for weeks as case numbers climb.

"I guess it probably has to do with the healing power of God, maybe," Mesher, who is double-vaccinated, told CTV News late last month.

"All I know is that the numbers are climbing each day and I can't wait for this to be over."

THREATS HAVE GROWN, FROM DELTA TO LACK OF HOUSING

While Nunavik was relatively protected from COVID-19 in earlier waves of the pandemic, by its isolation and by people following travel rules, those barriers can't help stop the spread of Delta.

The new variant is drastically more infectious than the original variant, making it next to impossible that anyone who spends time indoors with an infected person won't also get sick.

Experts say that if you have spent a single second in close quarters, indoors, with someone infected with Delta, you should consider yourself a close contact. With the first variant, only after 15 minutes together would you be a "close contact."

It also used to be that Nunavik had empty houses available to isolate the infected or high-risk recent travellers. That's no longer the case, said Poulin.

"During the first wave, our partners from the Kativik Municipal Housing Bureau lent us houses that were unoccupied, to support with isolation and quarantine of travelers, mainly essential workers or patients that had to seek care in the South and were unable to isolate when traveling back home," she explained.

However, starting the past summer, the housing bureau could no longer spare those homes.

"This quarantining or isolating option is therefore no longer offered to travelers," she said.

There's a major, long-term housing crisis in Nunavik, with at least two families sometimes needing to live together because of a lack of homes.

Do you live in Nunavik and want to get in touch about the current crisis? Contact us at MontrealDigitalNews@bellmedia.ca.

An 18-year-old gunman opened fire Tuesday at a Texas elementary school, killing 14 children, one teacher and injuring others, Gov. Greg Abbott said, and the gunman was dead.

South Korea says North Korea has fired a ballistic missile toward the sea.

The Canadian Football League's Calgary Stampeders said they are investigating reports that player Brendan Langley was charged after a fight with a United Airlines employee at Newark Liberty International Airport that was partially caught on video, according to a team statement obtained by CNN.