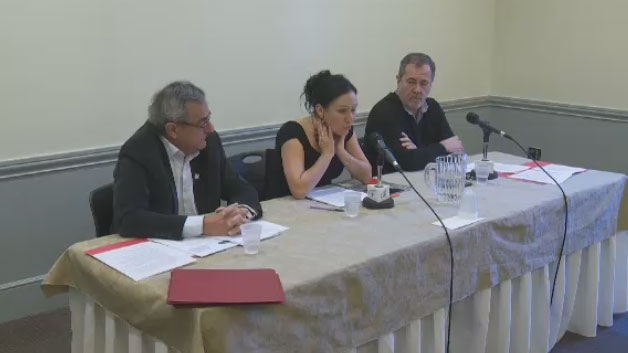 Representatives of MASSSE, CST and FTQ called on Justin Trudeau to review the unemployment insurance dispute settlement process at a press conference on Sunday.

Activists and some of Quebec’s largest unions are calling on the federal government to reform the employment insurance dispute settlement system.

At a press conference on Sunday, unemployment activist group MASSE, along with representatives for the FTQ and CSN called on Prime Minister Justin Trudeau to act on his campaign promise to review the system’s structure.

FTQ secretary general Serge Cadieux said he believes now is the time to act as the terms of those appointed by Stephen Harper will soon expire.

He called on the next round of appointments to be made based on competence in the fields of law and labour relations, not partisanship. He said he believes the current makeup of the Social Security Tribunal comes from “the Conservative machine,” stressing that it’s comprised of several defeated political candidates.

The three organizations said they want a return to the old system, which included arbitration boards composed of a president and a representative for employees and employers.

They said the complexity of the current system has dissuaded thousands of unemployed Quebecers from challenging a decision.