MONTREAL -- A false hostage threat in central Montreal on Friday led to a major police operation, the evacuation of dozens of people, a rare 'Code Orange' preparation at a local hospital and the lockdown of a daycare.

Staff were escorted out of the Montreal headquarters of video-game company Ubisoft, including some people who had been waiting on the building's roof, after what police later confirmed was an unfounded hostage threat.

"An investigation will follow to shed light on the [911] call behind this large deployment of police personnel," Montreal police said in a news release at 7:15 p.m. Friday, more than five hours after a major police operation got underway in the central Mile End neighbourhood.

For most of the day, police didn't confirm the nature of the 911 call they had received when they first arrived around 1:30 p.m. at the multi-storey building at the corner of St. Laurent Blvd. and St. Viateur St.

They simply said that "specialized SPVM officers are on site inspecting the premises."

The operation involved a heavy use of police resources, aside from other disruptions, including the "code orange" preparation put into place at a downtown hospital -- a very rare warning used in cases where there may be mass casualties.

The scene unfolded for hours as reporters watched police enter the building and then, several hours later, as people began to be escorted out.

At about 2:35 p.m., an armoured SWAT truck showed up, along with a police bus. 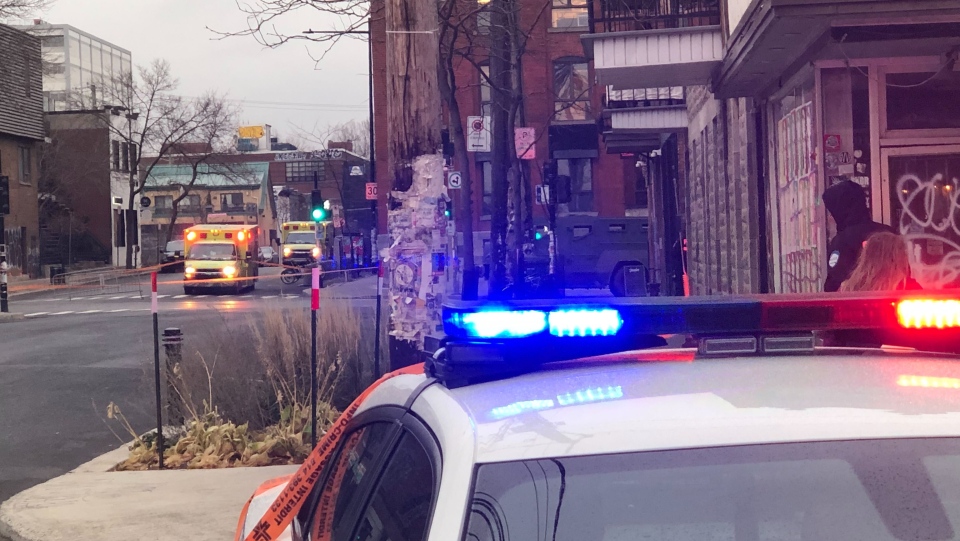 A Ubisoft employee told CTV News that in a company memo, employees at the office were asked to hide in a room or area that could be locked, to put their phones on silent, and to keep quiet.

Police said at about 3:30 that no injuries had been reported, and soon after, they said that no threat has been identified "for now."

No threat has been identified for now. We are currently evacuating the building. #SPVM https://t.co/7g7eHU2B1T

Also around 3:30 p.m., employees began to be escorted out in groups of about two to three dozen, each group forming a line with tactical police at the front and end of the line.

Police were seen on the roof and people were spotted with their hands up as they left the roof, one by one.

Many of those evacuated came out of a front door in the building and were walked up St. Laurent to another location. Many were taken to a police bus to warm up.

CTV reporters could see about six groups escorted out, all of them seeming calm and relaxed, with people walking slowly.

The operation continued for more than three hours, however, with police continuing to check the building. At the time, police still weren't saying what kind of threat they'd received.

“We don’t have any confirmation on the nature of the event but we are still working to secure the place,” said Montreal police spokesperson Veronique Comtois at around 6:00 p.m.

At 7:15, they confirmed that the operation was complete and that there was no threat -- but that a call had come in about "a hostage-taking in an office building on Saint-Laurent St."

Police are asking anyone with information about the unfounded 911 call to get in touch with police.

FALLOUT IN THE HEALTH NETWORK

A spokesperson for the McGill University Health Centre, a major hospital system downtown that includes several sites, confirmed Friday evening that it had called a pre-Code Orange over the threat at the Montreal General Hospital.

A Code Orange is a rare alert system used when medical staff need to prepare for the possibility of mass injuries. Even though no one was injured, it meant that doctors and nurses at the hospital needed to take time out of their day to be debriefed on the situation.

The health network couldn't immediately say when it has last called a Code Orange alert, but one nurse who works at the Montreal General said she believes the last one was during the Dawson College shooting in 2006.

Police are also offering psychological services to the people involved in the incident, saying they'd brought social workers to meet anyone who wanted to talk.

Aside from police vehicles, several ambulances were parked at the site as well.

Various reports spread throughout Montreal on Friday afternoon about what was happening at Ubisoft.

Aside from the police vehicles, a helicopter was also hovering, but the news station TVA Nouvelles posted on Twitter that it had sent its own helicopter to gather footage from the roof of the building.

That footage, according to photos the news outlet posted on Twitter, showed dozens of people standing on the roof of the Ubisoft building, but looking calm.

Police later asked media to avoid sharing any images of people on the roof of the building. 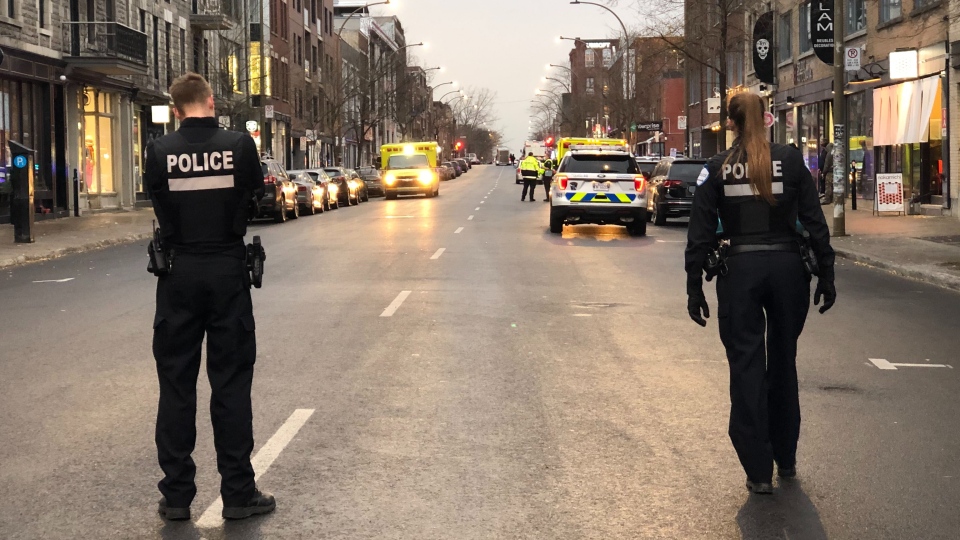 Both the SPVM and Montreal Mayor Valerie Plante used social media to ask the public to avoid the area.

A daycare near the Ubisoft building went into lockdown as the police presence began, with some of the children kept inside for a couple of hours at least while their parents, many of them Ubisoft employees, waited outside.

"They locked everything and turned off the lights," said Sara Nacer, a woman who was in a building nearby at the time.

When she left at about 2:20, "the parents were still waiting outside," she said.

It was unclear how many of the people inside the building were Ubisoft employees, since other companies also use space inside the same building.

Hugo Lefèvre, who works at Ubisoft, told The Canadian Press that he had just finished dinner when a rumour started to spread in the building that there was a potential hostage situation in the building.

At first he thought it might have been a hoax, but then he was greeted at the door by armed police.

He said he had been in contact with colleagues inside the building, who were safe and with police officers.

There is an ongoing police operation at the corner of Saint-Laurent and St-Viateur. We ask people to avoid the area. The #SPVM is currently validating information and more details will follow. pic.twitter.com/44PjWzsCOh

The director of Ubisoft's Montreal office said later that the company is "overwhelmed" by Friday's events "and, above all, relieved by their outcome."

"Our hearts go out to our colleagues and friends who were at the studio today," wrote Christophe Derennes, Ubisoft Montreal's managing director, in a statement Friday evening.

"They are all safe and sound, that's the most important thing. They were exemplary in an extremely difficult situation."

He said the company is also "extremely grateful to the police officers...for their quick, efficient and professional intervention" and that many people sent messages of solidary, which "touches us enormously."

--With files from Andrew Brennan, Emily Campbell and Angela MacKenzie of CTV News Montreal and from The Canadian Press