The two men shot within an hour of each other in Montreal have died.

The victims, ages 44 and 50, were shot about eight kilometres apart from one another. Montreal police (SPVM) are investigating.

SHOT IN A PARKING LOT

A 911 call was made around 12:55 p.m. concerning a man who was shot at the Rockland Shopping Centre in the Town of Mont Royal.

Officers arrived and found the 44-year-old man in critical condition. He was transported to the hospital, where he later succumbed to his injuries.

"Investigators will try to meet with witnesses who were in the parking lot when the event took place," said SPVM spokesperson Jean-Pierre Brabant.

Police are on the scene and have set up a perimeter. They will also analyze surveillance footage to determine whether the shooter was on foot or travelling by car. 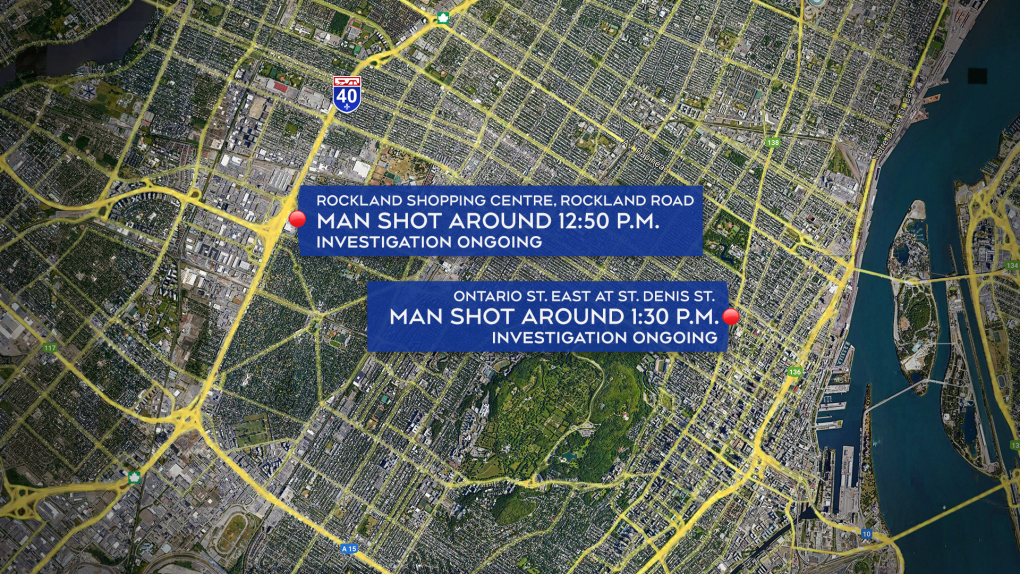 Montreal police are investigating two shootings within a half hour of one another under 10 kilometres apart.

Around 30 minutes later (around 1:30 p.m.), another man was shot in a restaurant on Ontario St. near St. Denis St. in Montreal's Latin Quarter neighbourhood.

Police responded and found the 50-year-old victim who had been shot in the upper body.

The victim's name was Diego Fiorita, CTV News has confirmed.

Initial information from the scene suggests a suspect approached the man and shot him in the restaurant, and fled the scene.

The victim was transported to hospital, where he too succumbed to his injuries.

There have been no arrests in relation to the shooting.

Montreal Mayor Valerie Plante reacted to the shootings on Twitter, saying, "Two armed events occurred in the city this afternoon. The SPVM is working in the affected areas to reassure citizens and conduct the investigation. All necessary resources are in place to shed light on these crimes."