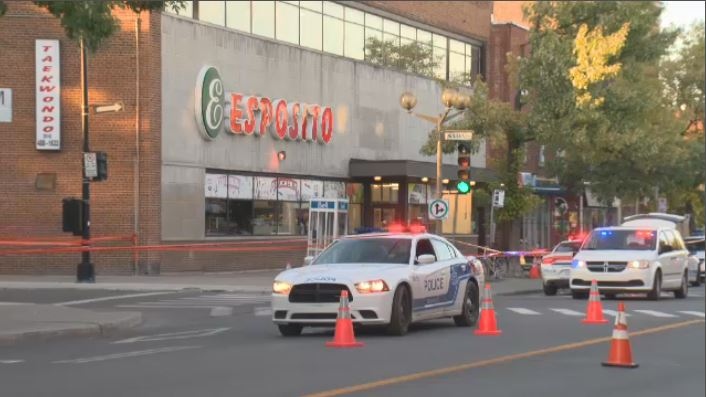 Police responded to a reports of a stabbing in broad daylight on Sherbrooke St. and Wilson Avenue in NDG. A man in his twenties was hospitalized and underwent surgery for upper body injuries. Two suspects were arrested by police a block away from the scene. (CTV Montreal)

Montreal police erected a perimeter in the area around Wilson Avenue and Sherbrooke Street. in NDG, where a man in his twenties was stabbed around 4 p.m. Saturday.

According to police, an altercation broke out between two men, one of whom brandished a knife.

The victim was stabbed numerous times in the upper body, and was transported to hospital.

He is currently undergoing surgery, said SPVM spokesperson Raphael Bergeron, and his injuries are critical.

The suspect, along with a female companion also in her twenties, fled the scene after the stabbing.

After interviewing witnesses to establish a better physical description, Montreal police arrested two people at the corner of Sherbrooke and Oxford Sts.

The cause of the altercation is still unclear.

Montreal police just arrested two people at the corner of Sherbrooke and Oxford Sts. A witness identifies them as the suspects in the stabbing at Sherbrooke and Wilson earlier today. pic.twitter.com/TygVoG05aF