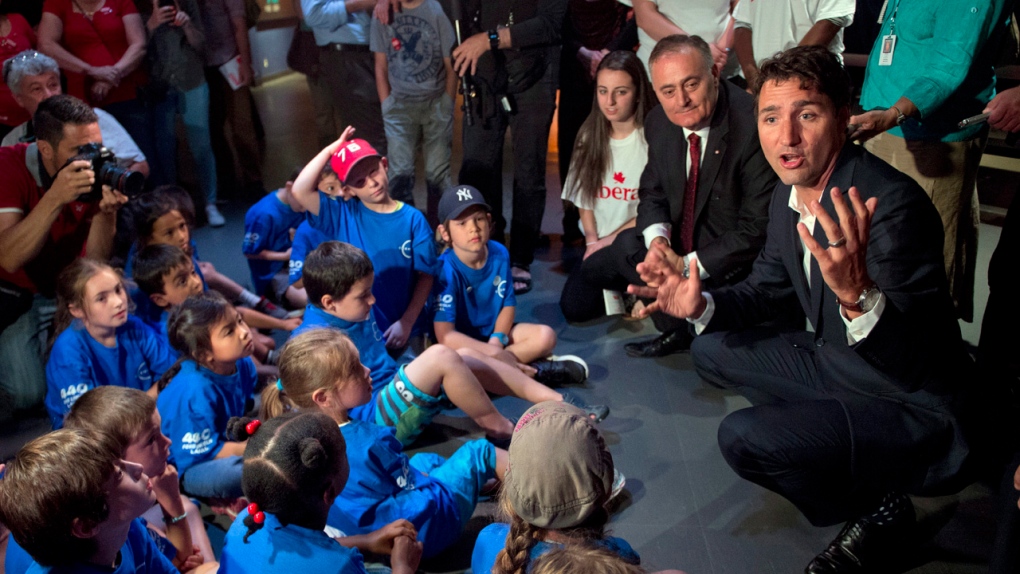 Federal Liberal Leader Justin Trudeau speaks to children at a space camp during a visit to the Cosmodome Tuesday, July 21, 2015 in Laval, Que. THE CANADIAN PRESS/Ryan Remiorz

LAVAL, Que. -- The NDP needs to better explain why it thinks Quebec should have an easier path to independence than the one outlined by the Supreme Court, says Liberal Leader Justin Trudeau.

Trudeau called out the NDP during a stop to a Montreal-area space centre on Tuesday, one day after a Leger poll indicated his party was in fourth place in Quebec with the NDP significantly ahead in first.

He reacted to a question about whether the NDP's strong support in Quebec can be attributed to it not being scared of soliciting votes from Quebec sovereigntists and soft nationalists.

"I'm sorry, but I don't think anyone will ever accuse a Liberal named Trudeau of being afraid of going after sovereigntists," he said. "I've been very, very clear that Canadian unity is an issue that is important to always address."

He said his party agrees with the court's 1998 decision that the referendum question and subsequent result must be "free of ambiguity" before the federal government would be obligated to negotiate separation.

Ottawa's Clarity Act states that a clear majority vote on a clear question on secession would be required before any negotiations.

"On issues such as national unity I think its important for anyone who wants to be prime minister and who disagrees with something like that (to) explain why," Trudeau said in Laval.

The NDP says it would recognize a simple majority of 50 per cent plus one in any future sovereignty referendum.

Its position stems from a 2005 policy paper called the Sherbrooke Declaration, which states "the right to self-determination implies that (Quebec's legislature) is able to write a referendum question and that the citizens of Quebec are able to answer it freely."

NDP Leader Tom Mulcair said in Ontario on Monday he is proud of his party's "open, optimistic, positive approach" toward involving Quebec in national affairs.

Since the NDP won 59 out of 75 federal ridings in Quebec in the 2011 election, Quebecers have elected a minority Parti Quebecois government before ousting it two years later in favour of a majority Liberal government. At the same time, support for the PQ's federal cousin, the Bloc Quebecois, has dropped significantly.

Trudeau said he recognizes his party has "a lot of work to do" to get back to the top of the polls, but he added many Canadians are on vacation and won't start paying full attention to the election until closer to the end of the summer.

He added he believes Prime Minister Stephen Harper will likely launch an election campaign early to take advantage of rules allowing parties to spend more during a longer campaign period.

"I am excited for the campaign to start so people can see that the Liberals are the real alternative to the Harper Conservatives across the country," he said.