Thousands protest for the 'liberation of Palestine' in Montreal

MONTREAL -- Thousands of people in Montreal waved Palestinian flags, drove through the streets and gathered in front of Israel's consulate general in Westmount in support of Palestine in wake of the growing violence between Israel and Hamas.

The protest in Montreal was one of several held in the city and across Quebec on Saturday.

Protesters chanted "stop the occupation," "Palestinian Lives Matter" and other slogans as a caravan of cars travelled from La Fontaine Park to Westmount Square.

"We are asking our government to put pressure on the state of Israel to end the expulsions immediately and to respect international law and human rights law," said Canadian Palestinian Foundation of Quebec vice-president Zahia Elmasri. 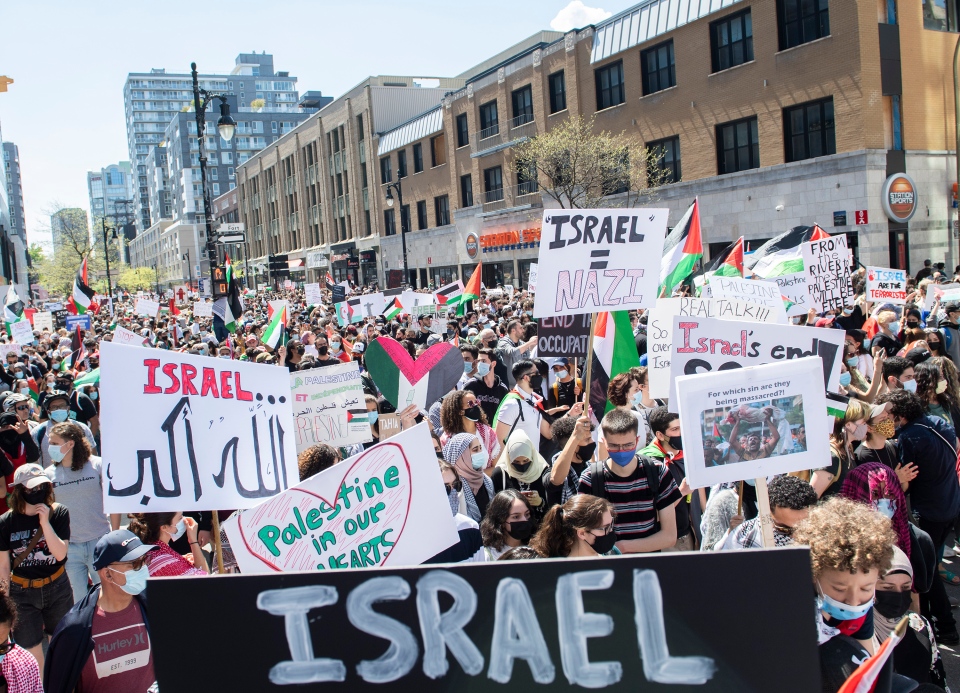 People in Montreal attend a demonstration on Saturday, May 15, 2021, to denounce Israel's military actions in the Palestinian territories. THE CANADIAN PRESS/Graham Hughes

The Stand for Jerusalem: NO to Ethnic Cleansing!, Stop Apartheid in Jerusalem and Commemoration de la NAKBA events were all planned for the same day.

"We're seeing that the Naqba continues. This year, we're seeing families all over Jerusalem are being threatened with expulsion from their homes," said Palestinian Youth Movement organizer Elias Ayoub.

Mira Sucharov, a political science professor at Carleton University, said the current flareup has noticeable differences from those that have happened in the conflict's past.

"We didn't see violence spill over inti Israel itself and now we are. That's very frightening."

After the march, as protesters gathered in front of the Israeli consulate, a window was smashed and tear gas was deployed by Montreal police.

Montreal police (SPVM) media spokesperson Raphael Bergeron said Saturday that there was a large crowd, but that the protest was peaceful.

On Sunday, SPVM spokesperson Julien Levesque confirmed that there were four arrests: one of mischief, one for assault on a police officer and two for armed assaults on police officers.

Levesque said no citizens or officers were injured, and that no infractions were given for disobeying public health measures though many were not wearing masks or respecting distancing guidelines.

One protester denounced the violent incident, saying "These people don't represent us. In every protest there will always be bad people who will misrepresent us."

Demonstrations were also held in major cities across the globe including Madrid, Baghdad, Beirut, and Paris. 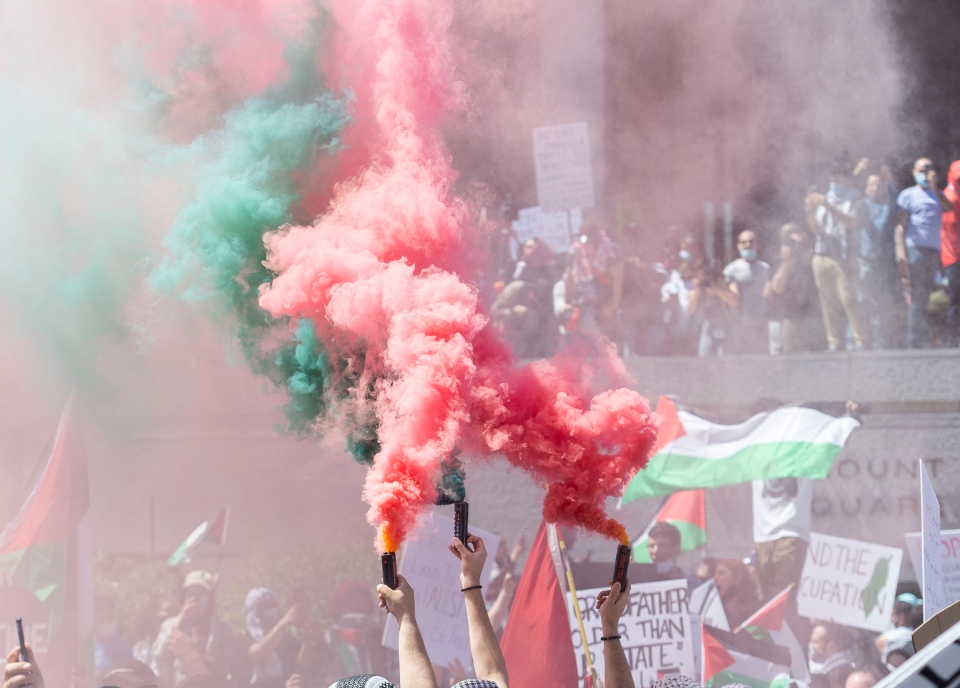 People in Montreal attend a demonstration outside the Israel consulate on Saturday, May 15, 2021, to denounce Israel's military actions in the Palestinian territories. THE CANADIAN PRESS/Graham Hughes

According to a statement from Netanyahu's office, the Israeli leader updated Biden on the developments and actions that Israel has taken and intends to take. It says Netanyahu also thanked Biden for the "unreserved support of the United States for our right to defend ourselves."

It says Netanyahu emphasized in the conversation that Israel is doing everything to avoid harming the uninvolved. The statement added "the proof of this is that in the towers where there are terrorist targets attacked by the IDF, they are evacuated from the uninvolved."

The Biden-Netanyahu call came just hours after an Israeli airstrike on Saturday targeted and destroyed a high-rise building in Gaza City that housed offices of The Associated Press and other media outlets.

-- with files from the Associated Press.