Ten per cent more Canadians are wearing masks in public than they were a week ago, study finds

MONTREAL -- French-speaking Quebecers are some of the least likely people in Canada to wear a facemask in public to guard against catching COVID-19, according to a recent study, while another study found grocery shopping is the most common outing during the crisis.

MASKS ON THE RISE

According to the Association for Canadian Studies and Leger survey, around 10 per cent more Canadians are wearing masks now than they were at the beginning of April, and 53 per cent said they wear protective masks in public areas. 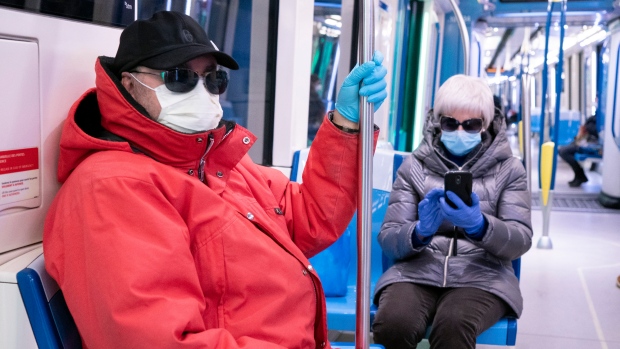 Jack Jedwab is the chair of the social impacts network COVID-19 for the ACS, which studies the social and economic impacts the virus has had on Canadians.

“I’m not at all surprised that Quebecers don’t like this kind of restriction,” he said. “It seems very counter intuitive or counter cultural to a lot of Quebecers.”

Jedwab added that the survey reflects the realities of geographic density and fear of the virus where those outside of the urban area tend to wear a mask less than those in the major cities.

Seeing others wear masks in public more, Jedwab said, plays into the increase.

“I would say no doubt there’s peer pressure,” he said. “I think that will create more pressure/influence on people to cover their mouths when they’re in public spaces.”

“It’s got to have something stylish about it or else, otherwise, the masks are something that people seem to have a particular appetite for,” he said.

Recent immigrants, 72 per cent, who have been in Canada for less than five years, found that masks partially protect from the virus and almost 15 per cent said they totally protect. Immigrants, particularly those from Asia, are more likely to wear a mask.

“In part, it’s explained via the cultural lens that sees some groups that are more comfortable wearing a protective mask or more accustomed to doing so in public spaces, which is far less likely the case for Quebecers,” said Jedwab.

The survey found that 10 per cent more Canadians wear masks when going out for groceries (about a third of the population) than they did a week ago, and those more afraid of contracting the virus predictably are more likely to wear a mask.

“We can see that the public messaging from the chief medical officer Theresa Tam and some elected officials that are encouraging people to wear masks is actually having an effect in terms of the increase week-to-week in the extent to which people are doing that,” said Jedwab. “The survey also points out that the more you are afraid of getting the virus, the far more likely you are to wear a protective mask in a public space.”

GROCERY STORES ARE THE PLACE TO BE

A separate ACS study found that going for groceries “has become one of the most common activities for millions of people despite the anxiety that the trip sometimes generates.”

“It’s an outing for them,” said Jedwab. “The more you go out there, the more you do risk yourself to the contagion, but these people don’t feel it’s a big a deal. So there’s a bit of a correlation between, ‘I’m not going to get it, so I can go to the grocery store three or four times…’”

Jedwab said that a surprisingly high percentage (22.1 per cent) are going out for groceries more than once a week, although Quebecers do this the least of all surveyed at 16.7 per cent. Scarcity of certain products like yeast, flower, potatoes and other staples continues to be an issue for those shopping.

Over half of those surveyed across the country (51.5 per cent) said they have difficulty finding what they want at the grocery store.

Men over 35 (61 per cent) are the most likely to get the groceries, according to the numbers.

The surveys were conducted by Leger in partnership with the ACS, and included 2,015 Canadians, 700 of which were immigrants.

More information on the surveys as well as other information can be found on the ACS website.