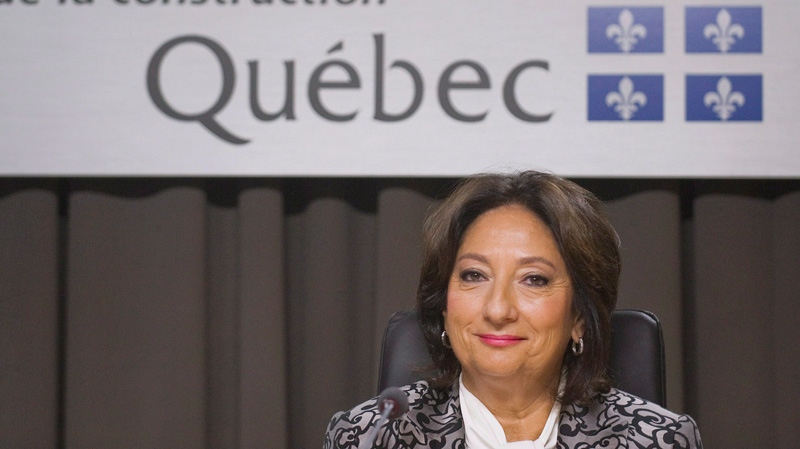 Justice France Charbonneau smiles as she sits on the opening day of a Quebec inquiry looking into allegations of corruption in the province's construction industry in Montreal, Tuesday, May 22, 2012. (THE CANADIAN PRESS/Graham Hughes)

MONTREAL--The extension of the mandate for Quebec's corruption inquiry became more likely today after it was supported by opposition parties in the legislature.

Robert Poeti, the Liberal public security critic and a former police officer, says extending the inquiry deadline to spring 2015 would be an investment in the future.

He says the cost of prolonging the inquiry another 18 months can be justified because it is a protection against increased costs incurred through corruption.

Justice France Charbonneau, who heads the inquiry, asked the government earlier this week for another 18 months so the commission could finish its work and write up its report.

The Parti Quebecois government, which had demanded an inquiry back when it was in opposition, is unlikely to say no. Justice Minister Bertrand St-Arnaud said cabinet is studying the request for the extension.

"Cabinet will have to make a decision on this request," he said.

The provincial Liberals aren't the only ones backing more time for the inquiry.

Quebec's order of engineers has also come out in favour of giving the inquiry more time.

Jacques Duchesneau, a member of the Coalition party and a former Montreal police chief, says he also wants to see the inquiry continue because the end result will be lower construction costs.

"It doesn't bother me. On the contrary, it's saving us money."

The inquiry was set up in 2011 by then-premier Jean Charest after intense pressure to tackle allegations of corruption in the awarding of public contracts and organized crime influence in the construction industry.

So far, the probe has heard incendiary testimony about rampant corruption in public procurement -- with the Italian Mafia, political parties and crooked bureaucrats supposedly involved in a number of schemes.

But the inquiry has focused almost exclusively on municipal politics so far, and has barely dipped its toe beyond Montreal. It prompted the resignation last fall of the mayor of Montreal, Gerald Tremblay, following claims from a witness whose testimony is now under attack.

A change in the schedule could hold a number of political implications.

The Parti Quebecois has a minority government. The schedule delay could mean that the politically explosive probe is still a factor while the government approaches the fourth year of its mandate.

It also could extend the life of corruption issues as a defining force in Quebec politics.