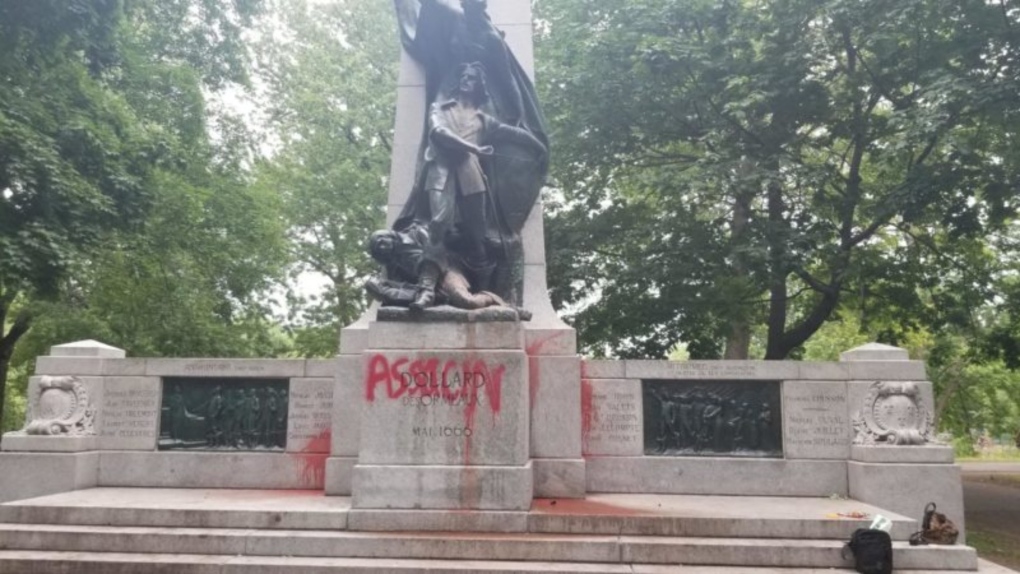 MONTREAL -- A statue of Adam Dollard-des-Ormeaux – a New France military commander from the 1600s who led a group up the Ottawa River to ambush the Iroquois – was defaced over the weekend in Montreal’s Parc Lafontaine.

Red graffiti, which was swiftly removed, read “ASSACIN” at the base of the statue. On the back, the work was signed by ANTIFA – a known anti-facism group in North America.

In an anonymous submission to a Montreal anarchist website, the group who vandalized the statue said “It goes without saying that the Dollard-des-Ormeaux statue is a national shame…”

Historians believe Dollard-des-Ormeaux’s ambush of the Iroquois was to stop them from attacking Ville-Marie (now Montreal), which is why he was considered a hero and one of the saviors of New France despite being killed during the battle.

He was also written into history by Lionel Groulx as a hero and a model for French Canadian children. Groulx, of course, has been widely criticized in Montreal over the past few weeks for writings that historians and journalists have said are anti-Semitic, resulting in calls to have the metro station that bears his name renamed to honour late jazz musician Oscar Peterson.

“This statue must fall into the dustbins of history in order to be replaced by liberating figures," the submission reads.

Montreal police say they were made aware of the vandalism at around 6:30 p.m. on June 27 and that they think it occured that same day or a day earlier.

“A report was filed by the police and we have opened an investigation into this event,” said Montreal police spokesperson Veronique Comtois.

All over the world, statues of historical figures are being defaced, toppled over, and even thrown into rivers in hopes that they will be replaced with figures who are not controversial.

"We struck a colonial and imperialist symbol of the Quebec nation to denounce the transformation of our public places into places of fascist veneration, such as the foul statue of John A. Macdonald, this notorious supremacist..." the submission says.