MONTREAL -- For many people, life in the pandemic feels like a big social experiment, but for a few people—namely, a group of Montreal students—it has literally turned into Lord of the Flies.

Nobody else seemed to see it coming, including other students at McGill University.

An older McGill student was walking home on Monday night around 9:15, along a major public park near campus, when the music he was listening to was drowned out by yelling.

“I was walking home with earphones, and I took them off because I heard something,” said the student.

There was a crowd nearby that was “definitely hyped up.”

He left the sidewalk and walked along a footpath to investigate. At the top of a hill he saw a jarring scene.

“It was like a tight ring of people,” said the 21-year-old third-year psychology student, who didn’t want his name published.

“It was loud. Two people in the middle… the crowd was cheering, they were drinking, there was a lot of beer.”

The two people in the middle were teenage boys who were physically fighting while the crowd cheered.

“I was kind of trying to stay far away, because obviously, it was a massive group of people not social distancing,” the student said.

“Also, the first-years have a ton of reported cases, so I was just trying to keep my distance. But it just looked sort of self-explanatory to me.”

In fact, the students had advertised the event: it was a so-called “fight night,” and their poster ended up circulated widely around Montreal’s social media this week.

The poster left people outside McGill scratching their heads, first of all, at why anyone who organized a fight club would discuss it so openly, considering the first rule of fight club; and second, about what in the world was happening at what’s normally the city’s most staid university.

In the end, many concluded it was a hoax or hadn’t actually happened, a theory backed up by McGill’s official response: “We were made aware of a possible gathering on Monday evening,” said spokesperson Cynthia Lee.

“Security Services were dispatched on site, but did not witness any gathering. There were additional patrols that evening, and no incidents or gatherings were reported. At this time, we cannot confirm this event took place.”

But the fight club did take place nearly exactly as advertised, except for a last-minute change in location, apparently to make sure it wasn’t broken up.

The poster advertised that certain pairs of boys would be fighting each other, with competitors listed from different student residence buildings. (At McGill, only first-year students live in residence.)

The poster also invited spontaneous newbies, cheerfully saying “Come prepped to fight even if you aren’t sure yet!”

It added that “we will have gloves if competitors want, and basic first aid,” and made clear that it was a gambling event, saying “betting will be organized by [one residence building’s] floor 11 Casino.” 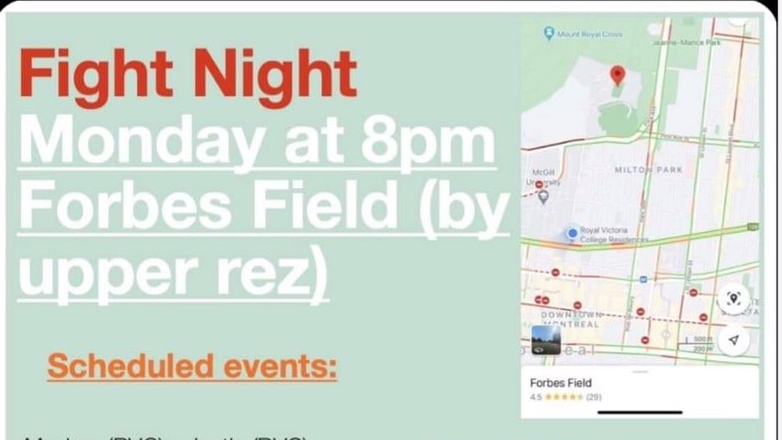 A map was included, pinpointing a field on campus, but the event ended up at the foot of Mont-Royal along Parc Avenue, an area that also backs onto some of McGill’s student residences.

The student who witnessed it said it seemed organized, to a point.

There were “three guys who had a box of supplies,” including water bottles, he said.

However, there didn’t seem to be clear rules around the fighting—the only ground rule he could glean was that punches to the face seemed banned.

“It was just kids in their shorts and shirt, no gloves, just grappling,” he said.

It wasn’t boxing-style but was “more of a wrestle,” he said, but “I don't know how they were defining wins because it was pretty lawless.”

While he was there, nobody seemed badly injured.

Videos from the event circulated briefly among students’ Snapchat accounts and other social media before they were swiftly erased—though some records were captured.

While the poster had advertised only boys as planned fighters, at least one video also appeared to show a young woman wearing a dress facing off against a male student.

There were later rumours that there were several hundred people there, but the witness said that wasn’t true.

On Thursday, McGill said again that “at this time, we cannot confirm this event took place.”

‘THE GENERAL SENTIMENT IS THESE KIDS ARE NUTS’

The older student said none of it bore much of a resemblance to what he remembers of rez life, two years ago.

“Bars, clubs, sometimes our floor would go to restaurants together, and that was about it,” he said.

Even when it came to the alleged student-run “casino,” he said, “I’m completely in the dark on that. It just seems like they ran communal poker games occasionally.”

Obviously, bars and restaurants aren’t an option now. And McGill has been enforcing strict residence rules to limit the spread of COVID-19, including forbidding students from going into each other’s rooms.

The school isn’t even using four of its biggest residence buildings this semester because they have shared bathrooms and less privacy and are therefore not COVID-safe.

The effects of this solitary life are becoming noticeable, the student said.

“I was actually mentioning to a friend of mine that it seems like rez is following the same activities as jails in the activities they get up to,” he said.

“All they do is smoke together outside,” he said. “They’re fighting now… It really seems like a jail environment. I’ve called New Rez [a building on Parc Ave.] ‘Alcatraz’ as a joke.”

McGill gossip has also moved almost entirely online, and it hasn’t been kind to the fight club.

“The general sentiment is these kids are nuts,” he said. But he said people should keep in mind all the ways they had to “blow off steam” at 18.

“Being in first year is having a lot of energy and not having your parents for the first time in your life,” he said.

“As much as we like to say they’re insane, it’s kind of hard not to have empathy for them, because it feels like they were kind of robbed of their first years.”

In fact, a lot of international students, also isolated, seem to have seized onto the controversy online as a strange source of school pride, he said.

“They’re willing to sort of pounce on anything that will give them a sort of affinity to the school.”

For those worried about the fighters or the spectators, he said, they probably shouldn’t be, aside from concerns about COVID-19 spread.

The cheering sounded more “like fun” than like Lord of the Flies in the end, he said.

“It felt like people were grateful to be doing something and have a reason to go out,” he said. “There wasn’t murder in these kids’ eyes.”