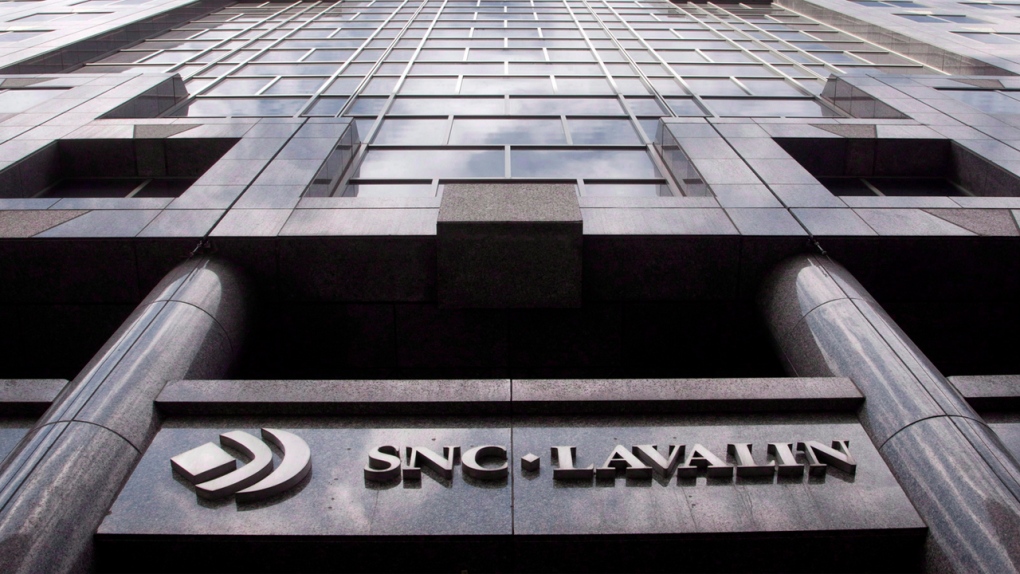 The RCMP has filed charges Thursday Feb. 19, 2015, against SNC-Lavalin for alleged criminal acts committed over a period of 10 years, including fraud and corruption relating to business dealings in Libya.

The RCMP filed charges Thursday against SNC-Lavalin for alleged criminal acts committed over a period of 10 years, including fraud and corruption relating to business dealings in Libya.

The RCMP says the construction company defrauded the Libyan government and other Libyan entities and businesses of approximately $130 million.

The charges also include accusations of corrupting Libyan public officials for a total of $48 million to use their positions to influence government decisions.

The police investigation looked into the construction company’s activities between August 2001 and September of 2011.

The RCMP charges stem from an ongoing investigation called Project Assistance, which began in 2011 and has already resulted in three arrests.

President and CEO of SNC-Lavalin, Robert G. Card, said the company considers the charges to be without merit.

Card also defends the company, saying the charges "do not affect the company's right and ability to bid or work on any public or private projects."

Three individuals -- two former SNC executives and one of their lawyers -- were previously charged by the RCMP part of the investigation that began in 2011.

In a statement, the Montreal-based company said that it will plead not guilty.

SNC-Lavalin employs about 45,000 employees around the world, including 16,650 in Canada, in oil and gas, mining, water, infrastructure and power sector projects.

"The charges stem from the same alleged activities of former employees from over three years ago in Libya, which are publicly known, and that the company has co-operated on with authorities since then," said chief executive Robert Card.

SNC-Lavalin (TSX:SNC) said the charges do not affect its ability to bid or work on any public or private contracts.

If convicted, SNC-Lavalin could be banned from bidding on government contracts for 10 years under Ottawa's so-called integrity framework. The code's regulations deal with companies convicted of crimes in Canada or abroad and the ban extends to subsidiaries and sister companies of convicted companies.

Three Canadian companies have been convicted since 2013 under the Corruption of Foreign Public Officials Act.

Calgary-based oil and gas company Griffiths Energy International was fined $10.35 million in 2013 for bribing a diplomat's wife to secure oil rights in Chad. Niko Resources of Calgary was fined $9.5 million in 2011 for bribing a Bangladesh cabinet minister for natural gas drilling rights. Hydro-Keen Group of Red Deer was fined $25,000 in 2005 for bribing a U.S. immigration officer at the Calgary airport to get workers into the United States.

In October, Card said that the company could be forced to close or sell its operations if it faced criminal charges. A company vice-president later clarified that it would consider all options in deciding what is best for shareholders.

SNC-Lavalin's reputation has been tarnished in recent years by charges against former employees in Libya, Algeria, Bangladesh, and in relation to a $1.3 billion Montreal hospital contract.

Ben Aissa was charged in Canada after he was extradited from Switzerland where Swiss authorities had sentenced him to the 29 months he'd served in jail on fraud-related charges relating to SNC-Lavalin's business in Libya. They also ordered him to repay millions of dollars to the company.

SNC-Lavalin had a presence in Libya for decades with annual revenues peaking at more than $400 million. Work included the Great Man-Made River project, a plan to pump water from deep desert wells to the populated cities along the northern coast. It also built an airport in Benghazi and a jail in Tripoli.

In 2011, the company removed all new contracts in Libya and nearly $900 million of older work from its backlog due to the civil war.

The World Bank suspended SNC-Lavalin in 2013 from bidding on projects it finances for a decade over allegations of bribery involving a bridge contract in Bangladesh and a project in Cambodia.

-- In recent years, SNC-Lavalin has been dealing with the fallout from allegations of corruption levelled at several of its former senior executives. On Thursday, RCMP laid fraud and corruption charges against SNC-Lavalin itself and two of its subsidiaries following an investigation into their dealings in Libya. Here are some important recent dates involving SNC-Lavalin and its executives:

May 2011 - Swiss authorities begin investigating Riadh Ben Aissa, a vice-president at SNC, on suspicion of corruption, fraud and money-laundering in North Africa.

February 2012 - SNC-Lavalin parts ways with Ben Aissa and in a release the company says it "reiterates that all employees must comply with our Code of Ethics and Business Conduct," but it does not explain further. Ben Aissa responds in a news release that he resigned and plans to take legal action against the engineering giant.

March 2012 - SNC-Lavalin chief executive officer Pierre Duhaime resigns abruptly after an independent review said he signed off on $56 million in payments to undisclosed agents, including $22.5 million in a single payment.

April 2012 - RCMP raid SNC-Lavalin's Montreal offices. An affidavit used to obtain a search warrant said police were looking for information relating to $160 million in kickbacks allegedly paid to the son of dictator Moammar Gadhafi, Saadi Gadhafi. The search warrant, which contains unproven allegations, stated the money was allegedly paid by Ben Aissa, who later denied the allegations. The document also implicated Ben Aissa, former SNC-Lavalin controller Stephane Roy and a consultant Cynthia (Cyndy) Vanier in an alleged effort to smuggle Gadhafi's son and his family to Mexico as the Libyan regime was failing in 2011. Vanier has proclaimed her innocence. Both Roy and Ben Aissa have filed civil suits against the company: Roy's action alleges wrongful dismissal, saying he was made a scapegoat and described as a rogue employee even though he always acted on the company's orders. Ben Aissa's brother suggested in a separate action that his brother was used as a scapegoat while protecting the company's interests in Libya in the face of political change.

April 2012 - Riadh Ben Aissa, the former vice-president at SNC, is charged in Switzerland.

April 2012 - Two former SNC employees, Ramesh Shah and Mohammad Ismail, are charged with one count bribery of a foreign public official, stemming from the awarding of a contract for the supervision and consultant services of the construction of the Padma Multipurpose Bridge in Bangladesh.

November 2012 -- Pierre Duhaime is charged in connection with the McGill University Superhospital contract. The charges allege Duhaime and Riadh Ben Aissa conspired to commit fraud and uttered false documents in connection with a contract pertaining to the McGill University Health Centre. The infractions are alleged to have taken place between April 30, 2009, and Aug. 31, 2011. Duhaime has pleaded not guilty.

February 2013 - SNC-Lavalin announces it has hired a former Siemens executive as its chief compliance officer to guide the company on ethics and matters of corporate governance.

February 2013 - Others are charged in the Montreal superhospital contract and additional charges are laid against Duhaime and Ben Aissa.

April 2013 - The World Bank bans an SNC subsidiary from bidding on World Bank projects for 10 years because of alleged misconduct in projects in Bangladesh and Cambodia. It was the longest bidding ban on World Bank Group-financed projects in the global agency's history and applies to SNC-Lavalin Inc. and more than 100 affiliates.

April 2013 - Consultant Cynthia Vanier is released from a Mexican prison after 18 months behind bars. She'd been arrested in November 2011 in the alleged plot to rent an airplane to sneak Saadi Gadhafi and members of his family into Mexico. Vanier has proclaimed her innocence.

May 2013 - SNC-Lavalin Group Inc. says it is making a limited-time offer of "amnesty" to whistleblowers within its workforce.

June 2013 - SNC-Lavalin says a gas project in the United Arab Emirates was used as a cover to transfer $13.5 million to unknown agents, a portion of the $56 million in questionable payments identified by the company in an internal investigation in 2012. The company said the amount was falsely attributed to the project even though the money went elsewhere. Another $20 million was also wrongly attributed to another project which SNC-Lavalin refused to identify.

September 2013 - The RCMP charges former SNC-Lavalin senior executive Kevin Wallace with bribery of a foreign public official, relating to the Bangladesh bridge contract. Counsel for Wallace says in a statement his client maintains his innocence and will fight to clear his name. Two others are charged as well.

September 2013 -- SNC-Lavalin's chief compliance officer says the company is working hard to become an ethical benchmark for its industry by correcting the problems that have damaged the engineering firm's reputation over the past 18 months. "We are well on our way and my perception is that our people, our employees, our executives completely understand what is required," Andreas Pohlmann said after addressing a fraud conference in Montreal.

February 2014 - The RCMP files criminal charges against two former senior SNC-Lavalin executives -- former executive vice-president Sami Abdallah Bebawi and Stephane Roy, a former vice-president. Bebawi was charged with fraud over $5,000; two counts of laundering proceeds of crime; four counts of possession of property obtained by crime; and with bribing a foreign public official. Roy is charged with fraud over $5,000; bribing a foreign public official; and contravening a United Nations economic measures act related to Libya. The offences are alleged to have taken place between 2001 and 2013. A warrant was issued for Bebawi's arrest as his whereabouts were not known.

February 2014 - SNC-Lavalin hires a senior executive from Dow Chemical Co. to oversee the company's governance, ethics and compliance efforts. David Wilkins becomes SNC's chief compliance officer reporting to the president. The company hired Wilkins to deal with the fallout from allegations of corruption levelled at certain former senior executives of the engineering and construction giant.

August 2014 - Riadh Ben Aissa, the former executive of SNC-Lavalin, reaches an agreement on charges stemming from allegations of money laundering, fraud and corruption involving the engineering giant's business in Libya under the Gadhafi regime. Ben Aissa has agreed with the charges in the indictment against him in Switzerland, paving the way for his return to Canada. Swiss authorities alleged Ben Aissa embezzled more than $120 million in funds from SNC-Lavalin.

September 2014 -- Ex-SNC-Lavalin vice-president Stephane Roy becomes the ninth person charged in connection with alleged fraud of $22.5 million involving the McGill University Health Centre, one of Canada's largest infrastructure projects, valued at $1.3 billion. Roy has maintained that he has always acted on the company's orders.

September 2014 - Bebawi faces new charges of obstructing justice, stemming from the alleged corruption of foreign public officials between 2012 and 2014. He is charged in conjunction with a tax lawyer.

October 2014 - A Swiss court accepts a guilty plea from Riadh Ben Aissa, the former SNC-Lavalin executive, and he is sentenced to three years in prison. With time served, he is returned to Canada in mid-October to face superhospital-related charges.

February 2015 - The RCMP announces it is laying charges stemming from the company's business dealings in Libya. SNC-Lavalin puts out a statement saying it will plead not guilty to the charges.

March 2015 - A preliminary hearing is scheduled in the superhospital case.