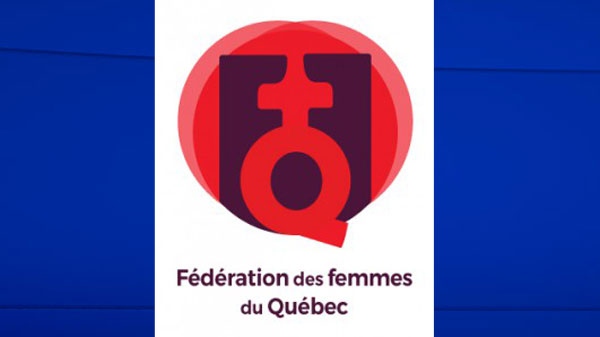 The Quebec Federation of Women, which is celebrating its fiftieth anniversary this year, is warning that if funding isn't secured, it will be unable to continue its basic functions. (Logo via Federation des Femmes du Quebec website)

Quebec's secularism bill is a frontal attack on women's rights and primarily targets Muslims, the head of a major feminist organization said Thursday during the final day of legislative hearings into the proposed law.

The legislation would put barriers in front of Muslim women by denying them the right to hold certain jobs if they wear a hijab, Gabrielle Bouchard of Federation des femmes du Quebec told the committee studying the bill.

"It's a bill that is fundamentally sexist," Bouchard said. "It is sexist because the fundamental point of feminism is 'my body, my choice.' And this bill is a direct attack on women's choice and their bodies."

Quebec's Bill 21 would prohibit public servants in positions of authority -- including primary and secondary school teachers, police officers, Crown prosecutors and prison guards -- from wearing religious symbols on the job.

In response to Bouchard's testimony, Immigration Minister Simon Jolin-Barrette said the bill doesn't target one particular religious group but "puts all religions on an equal plane."

Following Thursday's hearings, the bill will be debated in the legislature and then head back to the committee for study. Jolin-Barrette has said he wanted the proposed law passed before the legislature's mid-June summer break.

The Coalition Avenir Quebec government has the votes to make that happen.

Bill 21 invokes a clause in the Constitution that blocks citizens' ability to challenge the legislation in court. Jolin-Barrette said the government needed to include the Constitution's notwithstanding clause to ensure the will of the Quebecois majority was respected.

Bouchard admitted her federation once supported legislation prohibiting public sector workers such as police officers and judges from wearing religious symbols at work. But she says the feminist federation changed its position after recognizing the harm such a law would do to Muslim women.

"We've seen Muslim women face the backlash of this conversation over secularism for the last 10 years," she said. Every time a government tries to introduce legislation, she said, "Muslim women have to live with the consequences."

The Federation des femmes du Quebec reflects the progressive strain of feminism in the province and stands in direct contrast to another women's group that appeared in front of the committee last week.

Following Bouchard's testimony, Taran Singh, with a coalition of citizens who mobilized against Bill 21, told the committee the legislation would likely inspire the private sector to discriminate against religious people.

"How can one not see that the prohibition against wearing religious symbols is both an obstacle to upholding freedom of conscience and religion, as well as an attack on human dignity," Lepine said.