It was all good and grand at the Ramos home in Hochelaga-Maisonneuve – until someone squealed on the pig.

But the borough says he’s a nuisance.

For the past three years, Babe has lived a conflict-free existence. On Tuesday, the Ramos family was visited by the City of Montreal’s Canine Squad, who advised them that Babe is living in their condo “illegally.”

“I asked if the complaint was about the noise, and he said ‘no, there’s no noise complaint, it’s just that there’s a pig living here and it’s not allowed until the laws of the City of Montreal,” Ramons explained.

Ramos has a letter in his possession from the mayor of Rosemont – where he used to live- saying that having a domestic pig is perfectly fine.

In Hochelaga-Maisonneuve, however, borough officials say they’re only following the rules.

Micro pigs are not on Montreal’s permitted pet list, but those rules are currently being revised – this case too, is still being studied.

“In 2016 those kinds of animals, the pigs, were allowed in Rosemont,” explained Mayor Valerie Plante at a press scrum Thursday afternoon. “Then ‘oops,’ it disappeared. So for us is to look at all the things that have been done, and what do we keep, and what do we leave.”

But the family can’t comprehend why animals like ferrets or sugar gliders—a small gliding possum – are okay, and other animals, like pigs, are not.

The SPCA says it agrees with the restriction, because there’s already a rise in the number of abandoned barnyard animals around town.

“To ensure we don’t end up like in other cities where there are abandoned pot-bellied pigs and people exploiting and breeding them,” explained Alanna Devine, director of animal advocacy for the Montreal SPCA. “But taking into consideration families that are loving and responsible that already have these animals, there should be a grandfather clause.”

But fellow pig owners disagree – like Cassie Jordan, who says her two-year-old rescue pig, Jip, is just like any other pet. 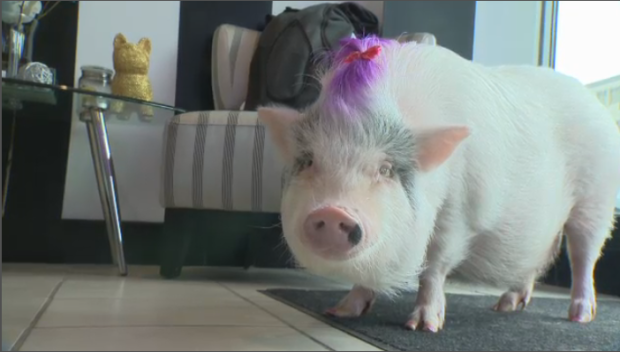 Jip, a (stylish) two-year-old rescue pig, lives with her two owners in St-Lazare, but more often than not is found hanging out at this dog grooming salon. (CTV Montreal)

Babe’s owners have little over two weeks – 15 days – to find a solution to their problem, or else face a $300 fine.