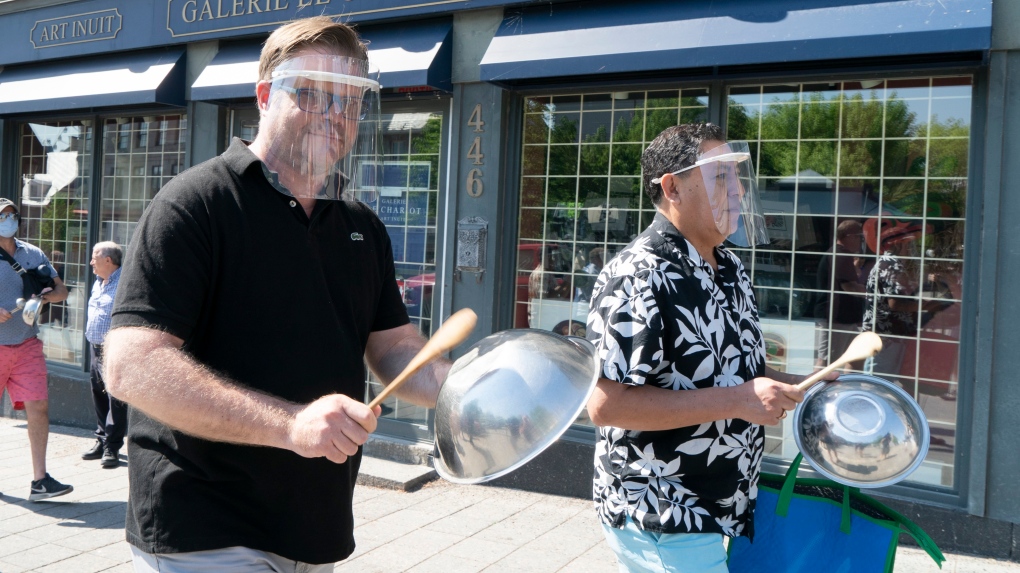 Montreal restaurant owners bang on their pots and pans as they demonstrate to pressure governments to let them reopen their restaurants in Montreal, on Wednesday, May 27, 2020. THE CANADIAN PRESS/Paul Chiasson

MONTREAL -- Some Montreal restaurant owners took their pots and pans to the streets Wednesday morning, demanding answers from the government on when they can reopen.

Nearly 30 restaurateurs banged their cookware while marching from Place Jacques-Cartier to Montreal City Hall during a demonstration that lasted about half an hour.

The provincial government allowed retail stores in the city with outside access to resume business this week, but it has yet to announce when restaurants can open their dining rooms.

Eric Luksenberg, who owns two restaurants on Old Montreal's Place-Jacques-Cartier, said that without the summer season he won't be able to pay his rent next winter, so he came up with the idea to "make a little noise."

Fellow owner Donato Trafficante estimates he lost more than $80,000 in revenue from his two establishments last weekend alone. He said if he is unable to open this summer, it could take two to three years to recover.

"We depend on our summer months," said Trafficante, who owns Trattoria Gio and John Michael's Pub. He said 80 per cent of sales are made between April and September.

"Right now, we're already two months late with no clear objective or date that we know we're going to open. It's very scary," he said.

Luksenberg, whose restaurants are Chez Eric and Le Homard Fou, said restaurant workers are paying the price for poor management of the province's long-term care residences, which have seen the worst outbreaks of COVID-19.

Jean-Marc Lavoie owns two restaurants in the Old Montreal area and he is worried about their future. He says the pandemic has already forced him to permanently close a third, Cage aux Sports, which relied heavily on tourists.

Lavoie says many unanswered questions remain, including what the restaurant capacity and guidelines for staff will be.

"Will our employees likely have to wear masks? Will we have to remove or block tables? There's a lot of questions without answers. We can't wait to have those answers," Lavoie said.

Earlier this month, a survey conducted by the Quebec Restaurant Association revealed 72 per cent of members wanted to reopen, even if it meant cutting seating capacity in half.

"What we're all afraid of is that they say 'In two weeks, we're going to open the restaurants.' Then everybody has to scramble to get the procedures in place and put up our terraces. There's a lot of work to be done to start our summer season."

This report by The Canadian Press was first published May 27, 2020.