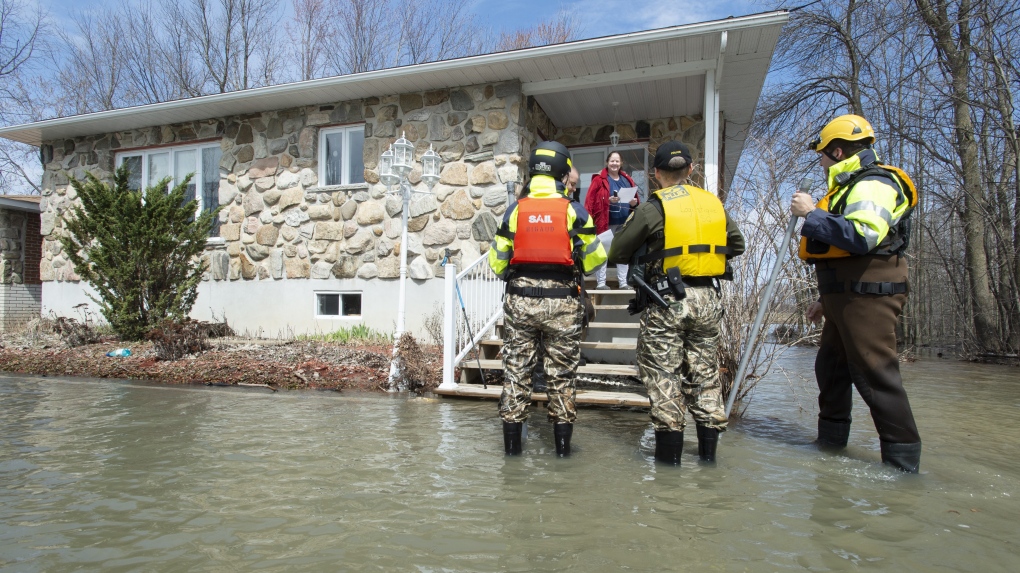 Quebec Provincial police and local firemen check up on a resident in a flooded neighbourhood in Rigaud, Que. on Tuesday, April 23, 2019. THE CANADIAN PRESS/Paul Chiasson

Only four per cent of Quebecers have taken steps to protect their homes from climate risks such as flooding, compared to 11 per cent of Canadians, according to a survey commissioned by the federal government.

With the spring thaw and the risk of flooding approaching, Public Safety Canada is launching a campaign to raise awareness of weather-related disasters. To do so, the department commissioned Ipsos to conduct an online survey of Canadians aged 25 to 55.

The department responsible for keeping Canada safe advises citizens to use water-resistant building materials for below-grade renovations, caulk around basement windows and the bottom of ground-floor doors, or mount large household appliances such as water heaters and electrical panels on wood or cement blocks, among other measures to protect against potential spring flooding.

Only four per cent of Quebecers have taken similar measures, and Public Safety Canada notes that spring is the peak season for flooding. Flooding can be caused by severe storms or by ice jams that form when water is blocked upstream by ice.

In the spring of 2017 and 2019, Quebec was hit hard by floods that required thousands of evacuations and resulted in significant material and human losses.

"What we recommend is that people contact their municipality and province because they can provide information specific to their area and for their community," said Nicholas Defalco, spokesperson for Public Safety Canada.

However, a recent report commissioned by Public Safety Canada from the Council of Canadian Academies (CCA) indicates that Canadian governments, municipalities and provinces, often rely on outdated data such as outdated flood maps.

"What I can say is that Natural Resources Canada is in the process of updating the maps," Defalco told The Canadian Press, adding that citizens can consult the canada.ca website, in the flood prevention and preparedness section, "for tips and tricks on how to prepare."

In Quebec, citizens can also consult the Geo-Flooding site to find out if their home is located in a flood zone, although it should be noted that some maps are not up to date.

MOST CANADIANS NOT AWARE OF RISKS

The Ipsos survey revealed a lack of understanding of the disastrous consequences of weather emergencies in Canada, notably that 76 per cent of Canadians are unaware or unconcerned about the risks to their community.

"Since the vast majority of Canadians are unaware or unconcerned about the risks in their communities, we need to find a way to increase public awareness and action on this important issue. As we continue to see in other parts of the world, the repercussions of not being prepared are far too high," said Public Safety Canada in a release.

For example, Defalco said "the average basement flood costs $40,000, so a small flood can cause damage, big damage. So we encourage people to contact their insurance companies to make sure they are covered."

About three in 10 Canadians (29 per cent) between the ages of 25 and 55 reported having an emergency plan for natural disasters.

"You have to be prepared to stay home, for a few days or maybe even a few weeks, that's the first step" of an emergency plan, Defalco said, "just in case you're not able to leave your house."

The spokesperson added that the second step in an emergency plan is to think about how to leave your neighbourhood in the event of a disaster that requires evacuation.

The survey, of a representative sample of Canadians, also indicated that almost half of Canadians -- 45 per cent -- "do not believe the pandemic has affected the way they prepare for future disasters."

This report by The Canadian Press was first published in French on March 7, 2022.

Canadian writers, publishers and literary figures doubled down on the right to freedom of thought and expression on Saturday, one day after an attack on award-winning author Salman Rushdie that left him hospitalized and on a ventilator.

Lightning has sparked more than 100 new wildfires in British Columbia since Wednesday, as thunderstorms rolled through the provincial Interior.