After an eventful weekend in Quebec City, the protestors demanding an end to COVID-19 restrictions packed up and headed home.

Quebec City police (SPVQ) said their tolerance for truckers parking on the provincial capital's main street has ended, and members of the provincial version of the 'freedom convoy' left. Some said, however, that they'll be back.

Organizer Bernard "Rambo" Gauthier gave a speech around 1 p.m. inviting protesters to leave and then return in two weeks when the city's annual Winter Carnival ends. He added that governments should reflect on their actions in the meantime.

He said he recognizes truckers need to work during the week, but hopes to see an even bigger protest unfold two weekends from now. He said he believes protesters sent a clear message to Premier Francois Legault about their distaste for public health measures geared towards addressing COVID-19.

Police issued a warning to truck drivers early on Sunday that their rigs are parked illegally and they will be fined or worse should they fail to move.

“In the next few hours, the parking tolerance in connection with the event will be lifted,” Quebec City Police (SPVQ) said.

Fifteen fines were handed out since Saturday night for road safety, 17 for parking illegally, and seven for breaking municipal bylaws, including drinking in open air.

Martin Ross, a trucker from Beauce, Que., told the press earlier that he planned to leave Sunday night, noting that the convoy will head to Montreal if COVID-19-related public health measures are not dropped.

The Quebec government is set to relax more restrictions Monday, allowing cinemas, concert halls and indoor events to operate at 50 per cent capacity and allowing greater capacity limits for places of worship and funerals.

Ross said he will leave out of respect for residents and businesses concerned about the noise, adding that he needs to work.

"It's expensive to keep this thing running," he said.

Courtesy warnings from @SPVQ_police being given to truckers. An officer told demonstrator that was the last verbal warning—next it’s fines or being towed. Some say they aren’t leaving until mandates end, and @francoislegault & @JustinTrudeau resign. pic.twitter.com/YMev8q5YCe

CHECKING OUT AND MOVING ON

At 12 p.m. EST Sunday, around 20 semi trucks remained on site at the protest along with some pickup trucks. Traffic is open in both direction on one side of Rene-Levesque Blvd. Some protesters did laps on the roads that were open.

A handful of protesters who arrived Sunday on horseback and were asked to leave by police.

By 5 p.m., all trucks had vacated the area around the National Assembly. 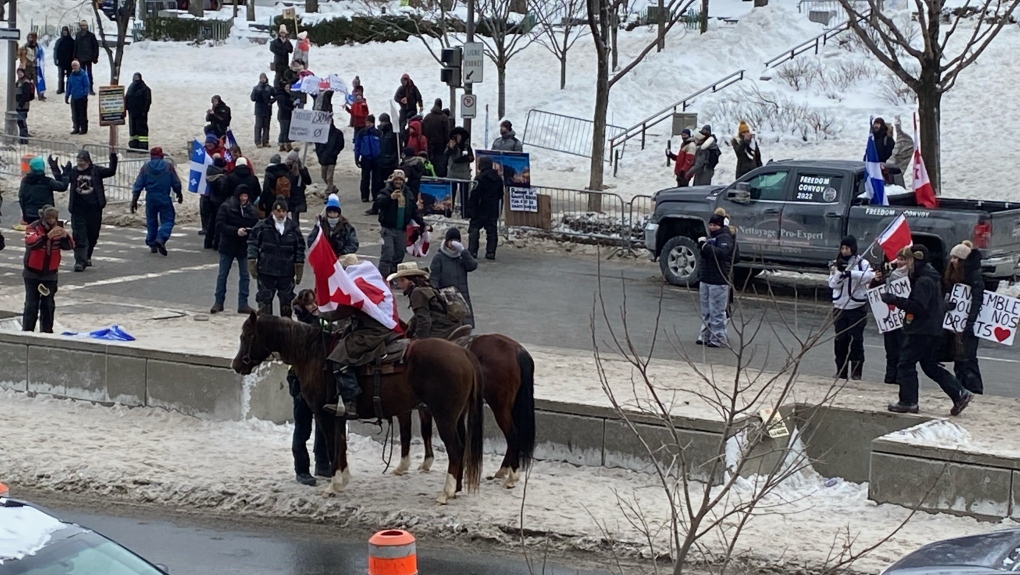 Some protesters arrived in Quebec City on horseback and were spoken to by police. (Ian Wood/CTV News)

Some protesters arrived in Quebec City on horseback and were spoken to by police. (Ian Wood/ CTV News)

Delta Hotel staff said around 200 people checked out of the hotel next to the National Assembly on Sunday morning. The majority of those staying at the hotel refused to wear masks though the hotel staff asked them to.

About 20 trucks leftover this morning. Honking started about an hour ago. Police has reopened traffic on one side of street. #cdnpoli #qcpoli (excuse the panorama pic) pic.twitter.com/ZxkifHss2E

Saturday night was the first night when the three major trucker convoys met up in the provincial capital to protest the ongoing restrictions and mandates put in place due to the COVID-19 pandemic.

Though tickets were handed out and one person was arrested, police say the protests have been peaceful. Police said Sunday that the arrested invidual was sought by police on an arrest warrant and that they were located at the protest site outside the National Assembly.

The actions -- or more notably, the inaction -- of a school district police chief and other law enforcement officers has become the centre of the investigation into this week's shocking school shooting in Uvalde, Texas.

As Russia asserted progress in its goal of seizing the entirety of contested eastern Ukraine, President Vladimir Putin tried to shake European resolve Saturday to punish his country with sanctions and to keep supplying weapons that have supported Ukraine's defence.

A scientific analysis commissioned by the FBI shortly before agents went digging for buried treasure suggested that a huge quantity of gold could be below the surface, according to newly released government documents and photos that deepen the mystery of the 2018 excavation in remote western Pennsylvania.

Indiana police disclose cause of death of young boy found in a suitcase. They are still trying to identify him

An unidentified child who was found dead in a suitcase last month in southern Indiana died from electrolyte imbalance, officials said Friday.