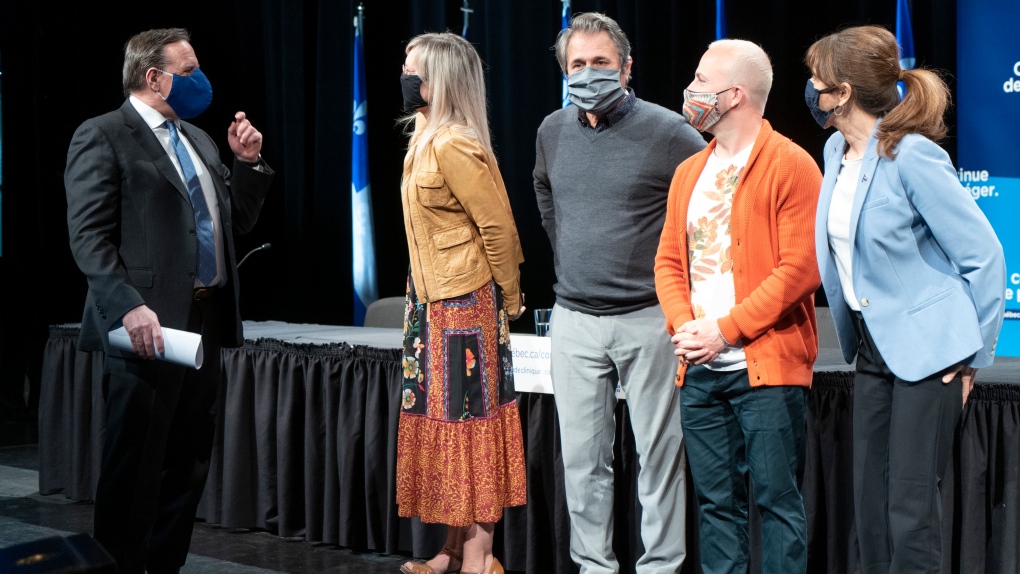 MONTREAL -- Quebec announced a plan to relaunch its cultural sector Monday, planning to inject $250 million of new money to help the struggling cultural industry, which has seen plays, concerts and other shows cancelled due to the coronavirus pandemic.

"Culture is the soul of Quebecers," Premier Francois Legault told a news conference in Montreal. "Quebecers adore their artists and they are missing them."

The premier said his government is working on a timetable for the reopening of certain venues that can begin welcoming a reduced number of spectators, "but we aren't there yet."

Instead, the government is making hundreds of millions of dollars available to fund projects in areas such as cinema, television, theatre and music. Artists will have to apply directly to the government for funding.

"For all the artists, if you have projects, it's time to bring them forward," Legault said.

Meanwhile, COVID-19 indicators in the province continued their downward trend Monday. Quebec recorded 20 more deaths over the previous day -- the lowest number of reported deaths over a 24-hour period since April 5, bringing the provincial total to 4,661.

Additionally, there were 13 fewer patients in hospital with the virus, for a total of 1,185. And 16,597 patients are considered to have recovered.

Many services and business across Quebec reopened Monday after several weeks of pandemic-induced shutdowns. Daycares are now open in the greater Montreal area and in the administrative region of Joliette, a town about 65 kilometres northeast.

Courthouses across the province were also permitted to reopen gradually, starting Monday, with limited seating capacity and Plexiglas barriers protecting clerks and judges.

Camping is now allowed outside the Montreal and Joliette regions, as are country home rentals.

Shopping malls, nail salons and other personal care centres are also reopening, but only outside Montreal.

Education Minister Jean-Francois Roberge announced earlier in the day that public health officials have signed off on a special activity for graduating elementary and high school students that respects COVID-19 safety measures.

Roberge said in a statement that many students had urged the province to act, wanting one last chance to see their friends and teachers. The ceremonies will allow for a memorable event to mark the end of their school year, including official photos or a chance to sign yearbooks, Roberge said.

While elementary schools have opened outside the greater Montreal area, high schools in the province are shuttered until September.