Quebec Premier François Legault announced the province will apply a "significant" financial penalty for residents who refuse to get vaccinated against COVID-19 for non-medical reasons.

The premier made the announcement at a news conference Tuesday afternoon, describing the measure as a "health-care contribution," though the exact amount has not yet been determined.

The province is consulting with the finance minister and its legal advisers about implementing the measure, but Legault already said $50 or $100 "is not significant" enough for him.

The tax would apply to all adults in Quebec who refuse to get their first dose of the vaccine "in the next few weeks," according to the premier. People who have medical exemptions to vaccination will not have to pay the tax.

The unvaccinated "will have a bill to pay because there are consequences on our health-care network and it's not up to all Quebecers to pay for this," the premier said.

"It's a question of equity because right now, these people, they put a very important burden on our health-care network. And I think it's normal that the majority of the population is asking that there be a consequence," he continued.

"And yes, we will continue to look at spreading the use of the vaccine passport, but I think we have to go further."

In a Facebook group for thousands of unvaccinated Quebecers, people described the move as "psychological warfare" and said they wanted to challenge it in court.

Legal experts told CTV News that the issue raises a lot of interesting questions but is far from legally clear-cut, with constitutional lawyer Julius Grey saying the outcome would be a “close call” if it's challenged in court.

One unvaccinated man told CTV News that the tax won't spur him to get a shot.

It will have "no impact on my decision," said Marc Belec Lafrance, who lives in Saint-Eustache, north of Montreal.

"They've taken everything away from me. And they can continue. It wouldn't change anything," he said.

Here is Premier Legault in English on the upcoming "health contribution" that any adult Quebecer who is not vaccinated will have to pay.

Legault says the amount will be significant and details will be announced in the coming weeks #cdnpoli https://t.co/MztMudjpza pic.twitter.com/NlC5SNGvJu

If the health-care contribution is implemented, it would arguably be one of the strictest COVID-19 health measures in Canada, happening in a province that is already under a curfew for the second time during the health crisis.

However, a few other jurisdictions around the world have opted for similar measures in recent months, including Austria and Greece, both of which created penalties that will take effect in the next few weeks.

Austria's in particular is very strict, charging the equivalent of about $5,150 CAD (3,600 Euros) every three months to everyone over 14 in the country who remains unvaccinated.

In a statement, the Canadian Civil Liberties Association slammed the idea of the tax and asked the Legault government to abandon it.

"Our Charter recognizes individual autonomy over our bodies and medical decisions. Allowing the government to levy fines on those who do not agree with the government’s recommended medical treatment is a deeply troubling proposition," she wrote.

"To justify this kind of restriction on constitutionally protected rights, the government must provide clear and compelling evidence and demonstrate that there were no other reasonable alternatives."

Making all adults who refuse to be vaccinated pay an expensive "health contribution" is a "radical" idea, says Quebec Solidaire (QS).

QS health critic Vincent Marissal said in a statement that the premier is "completely forgetting" the vulnerable.

Marissal called on the government to publish the legal and scientific opinions it holds that justify this 'radical' measure.

“The public will then be able to judge whether this is a public health decision or a public relations decision," he said.

Liberal Leader Dominique Anglade also criticized the measure in a series of tweets.

“Today, Francois Legault has chosen to divide and divert,” she wrote, saying that “after 12 days of silence” she expected a plan from the premier.

“With arrogance, [Legault] gave us a beautiful ‘smoke show’ without public health advice, without any details, without having answered questions and without having consulted the Assembly. Again, he relies on the polls and his political instincts.”

Quebec continues to see hospitalizations rise from the coronavirus, with a net increase of 188 new hospitalizations in the past 24 hours. There are now 2,742 people in hospital. The province also recorded 62 new deaths due to the virus, surpassing a total of 12,000 since March 2020.

Heart and cancer surgeries are now being postponed in some Montreal hospitals, while others in the Laurentians are transferring some patients to long-term care homes to receive treatment as the province is running out of hospital beds amid a surge of COVID-19 patients filling emergency rooms.

“We continue to see an increase in hospitalizations in Quebec," Legault said.

"Our biggest challenge right now is finding enough health workers. We estimate that in the next weeks we’ll need 1,000 additional workers for hospitals and 1,500 for CHSLDs."

That is the case in other jurisdictions, including Ontario, where 56 per cent of the hospitalizations as of Tuesday were for the coronavirus, according to that province's health minister. Quebec's Ministry of Health and Social Services said work is underway to provide more transparent statistics on hospitalizations in the near future.

However, Quebec's Health Minister, Christian Dubé, explained at the news conference Tuesday that even though half the province's hospitalizations are secondary cases, Quebec will reach a critical level of hospital capacity in the next five to 10 days, based on predictions from the Institut national d’excellence en santé et services sociaux (INESSS).

"Within one week we should reach a level that will be very difficult," the health minister said.

Even though the unvaccinated represent about 10 per cent of the total population of Quebec, he has said previously that they account for about 50 per cent of the hospitalizations in the intensive care units.

Legault also introduced the province’s interim director of public health Tuesday, one day after the province’s top doctor resigned amid public criticism of his work throughout the pandemic.

Dr. Horacio Arruda wrote in an open letter to Legault that he offered his resignation from the job he’s had for 12 years to give the premier an opportunity “to reassess the situation, after several waves [of the pandemic] and in a context in constant evolution."

Boileau is a physician who holds a master's degree in health administration from the Université de Montréal and has been a regular adviser to the government throughout the pandemic. 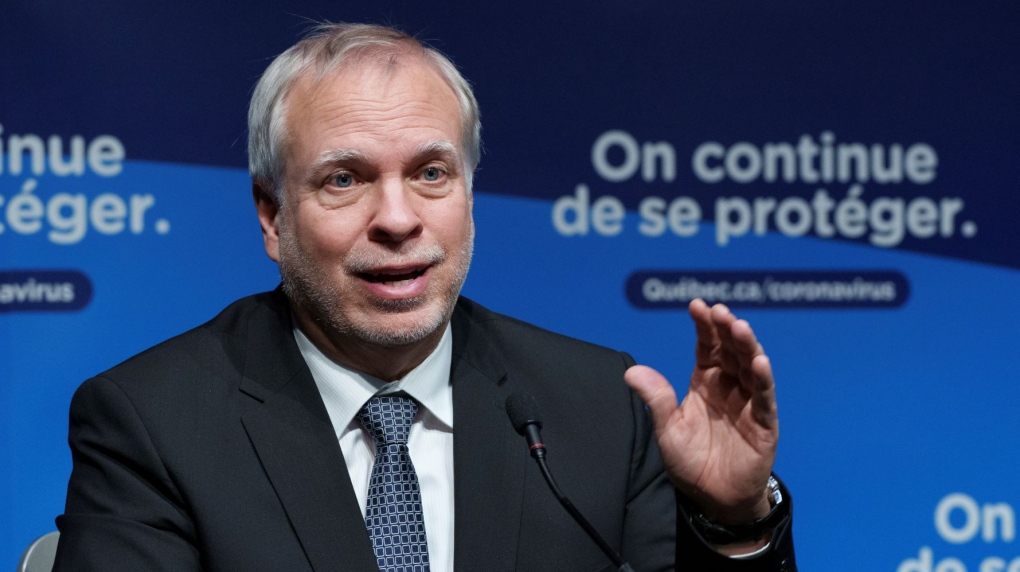 Legault confirmed to reporters that he accepted Arruda's resignation and that he stands by him, but added that "there are some advantages" to have a new face for public health 22 months into the health crisis.

"Dr. Arruda is somebody who was very nice, and I told him that, of course, he's not leaving. He will take a few weeks of rest, but then he will continue to help us."

Dubé also said he respects Arruda's medical opinions and that he "deserves a good break."

One of the first tasks for the new public health director will be to assess whether students in primary and secondary schools can return to the classroom on Jan. 17.

Legault said he wants Boileau to "take the time to look at the benefits and the disadvantages" of resuming in-class learning, which the premier says is a priority.

As the decision looms, teachers' unions are calling for air purifiers to be installed in all classrooms where ventilation is deemed inadequate.

Some specialized classes, such as those for students with disabilities, have already returned to school on Jan. 3. In Montreal, 66 per cent of classes in Montreal school service centres have closed down due to outbreaks of COVID-19, according to Sylvain Mallette, president of the Fédération autonome de l'enseignement (FAE).

--With files from CTV's Selena Ross

A judge ruled Monday he will allow jurors to hear evidence that disgraced South Carolina attorney Alex Murdaugh was stealing money from his law firm and clients and committing other financial crimes long before his wife and son were killed in 2021.