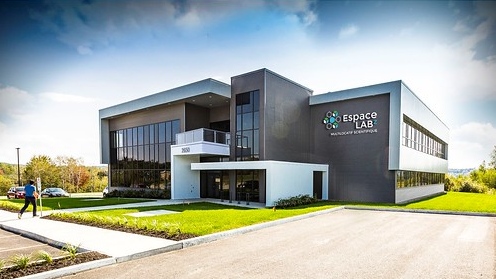 MONTREAL -- As soon as the COVID-19 pandemic began last year, Canada realized its biomanufacturing vulnerability. The inability to develop and then produce vaccines locally on a large scale caught the government off guard, and the Eastern Townships in Quebec was one of the places where a solution was found.

A whole ecosystem of health science companies has been created over the years around the Centre de recherche du Centre hospitalier universitaire de Sherbrooke (CHUS) and biotechnology has also made its niche there. From the development of a formula to biomanufacturing in a factory, and including the entire clinical trial process, it will now be possible to create treatments and even vaccines that are almost 100 per cent of the region, should new viruses wreak havoc.

The first link in the chain is the researchers who develop new pharmaceutical technologies, as does the team at Immune Biosolutions. The young company has just been granted assistance from the federal government's Strategic Innovation Fund, which could reach up to $13.44 million depending on various conditions.

The small business, which is housed at Espace LABz in Sherbrooke's science park, is currently working on an immunotherapy treatment to combat COVID-19.

Its bioreactor-produced antibodies will be effective in helping the body fight the disease caused by the SARS-CoV-2 virus and its major variants.

"When you vaccinate, you are preparing the army for an invasion," said Immune Biosolutions president Frederic Leduc.

Continuing with his war analogy, he added that immunotherapy serves to "give the body weapons to limit the replication of the virus."

When a person has been vaccinated, they develop their own antibodies to fight the disease, but this does not necessarily prevent them from being infected.

If infected, it may take four to seven days for the body to recognize the virus and mobilize its defence system. Immunotherapy is mainly used to fill this one-week gap by neutralizing the virus until the body takes over. At the same time, the COVID-19 patient should clear the virus more quickly.

Two similar treatments are already available on the market, including one manufactured by Regeneron, a name made familiar since it was one of the treatments given to former US President Donald Trump when he contracted COVID-19 in the middle of the election campaign last autumn.

Beyond the commercial competition, it is more the race against the virus that interests.

"Our main race is to come up with antibodies that are effective against all variants," said Leduc. "If we succeed in doing that, then it's up to health professionals to choose the tools they want to use according to the data and the local infection situation."

Leduc's team should soon grow from 25 employees to just over 30.

The treatment is currently in late pre-clinical studies, validating its safety in animal models, with a view of entering the first phase of human clinical studies by late summer or early autumn.

This is the case, among others, at DIEX Research, whose head office is located in Sherbrooke, but which also has offices in Quebec City, Victoriaville and Joliette.

Since the beginning of the pandemic, the team of some 60 full-time employees and 20 or so collaborating physicians has contributed to the studies of the Quebec vaccine created by Medicago, in addition to helping Immune Biosolutions in the development of its immunotherapy by, among other things, taking blood samples from patients with COVID-19.

In concrete terms, DIEX Research is responsible for recruiting participants in research protocols, informing them about the projects and their implications, ensuring close follow-up of the subjects and transmitting all the data collected to the developers of the products studied.

The company's president and co-founder, Suzie Talbot, laments the fact that her field suffers from a stigma fuelled by the movies and the media, which maintain the image of exploiting poor people or students as guinea pigs.

Ironically, it seems that the pandemic has helped to transform this public perception.

"We talk every day about science, about the importance of research, about vaccination," she said. "For us, the life sciences industry in general, it has put us forward, we have an excellent showcase and in the last year it has improved greatly."

The nurse by training co-founded her laboratory 15 years ago.

In the future, she hopes that governments will learn the lesson that this industry is crucial.

"We're going to need strategies and not just in the short term," said Talbot. "There have been consultations in the past, they need to continue and it is now that our companies need the resources to come up with concrete, effective solutions more quickly."

As the last link in the chain, Canada needs to strengthen its biomanufacturing capacity.

Immune Biosolutions will use some of the federal funding it has received to expand its facilities and purchase equipment to do some of its own production.

Other plants will also be called upon to contribute, including those of KABS Laboratories, which already has facilities in Val-des-Sources, the Eastern Townships, Saint-Hubert, and the Monteregie region.

The small business with approximately 135 employees is looking to expand its team by about 40 new members.

At the same time, it is piloting two construction projects, namely the erection of a second production site in Val-des-Sources and the expansion of its Saint-Hubert premises.

KABS Laboratories specializes in the field of monoclonal antibodies, which makes the company an ideal business partner for the treatment developed by Immune Biosolutions.

The company's facilities also allow it to manufacture sterile injectable drugs used to combat autoimmune diseases or to treat cancers, among other things.

While production will focus on manufacturing treatments for the time being, the company must be ready to adapt quickly.

"The agreement we have with the federal government is to be available to respond to epidemiological emergencies," said KABS Laboratories president Jean-Simon Blais. "If we need to make (batches of) vaccines, the same types of systems are used, so we can turn around and produce a vaccine."

As part of the same federal strategic fund mentioned earlier, the manufacturer is receiving a $55 million repayable loan. The money will be used to finance its expansion projects and equipment purchases. The total investment is expected to reach $84 million.

In Blais' view, it is important to note that Canada's immunization security strategy must be supported not only by adequate infrastructure but also by expertise that has been lost over the years.