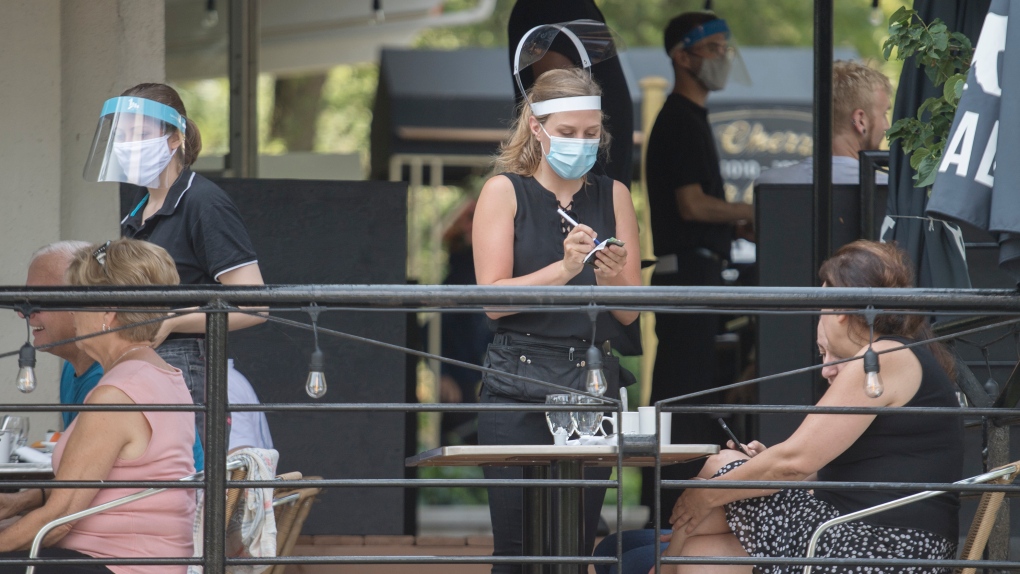 People wear protective gear as they take orders at a restaurant in Montreal, Sunday, July 19, 2020, as the COVID-19 pandemic continues in Canada and around the world. The wearing of masks or protective face coverings is mandatory in Quebec as of July 18. THE CANADIAN PRESS/Graham Hughes

MONTREAL -- There are now 5,662 people who have died of COVID-19 in Quebec, health authorities announced Wednesday, as confirmed cases in the province reached 57,938.

That’s up four from the total of 5,658 deaths reported Tuesday.

COVID-19 cases in Quebec rose 142 from the total of 57,796 announced a day earlier; that's the lowest number of new cases reported since July 16, when 141 were announced.

Wednesday is the 11th day in a row during which 100 or more cases of COVID-19 have been reported.

There are 235 people being treated for COVID-19 in Quebec hospitals as of Wednesday, down 12 from the 247 reported Tuesday. Of those in a hospital, 16 are in intensive care, up one from the 15 reported 24 hours earlier.

The number of people in Quebec who have recovered from COVID-19 as of Wednesday is 50,373, up 75 from the 50,298 recoveries reported a day earlier.