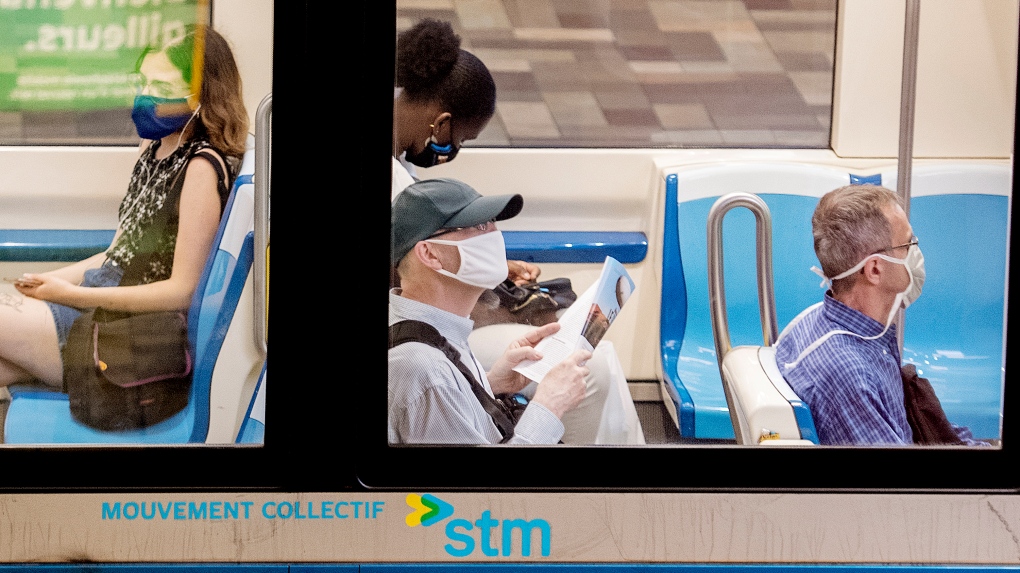 People wear face masks as they commute on a metro in Montreal, Sunday, July 12, 2020. Since July 13, Quebec has made masks mandatory for anyone riding on public transit, with the only exceptions being those who can't wear one for health reasons. THE CANADIAN PRESS/Graham Hughes

MONTREAL -- Quebec public health officials announced Friday that 164 more people have tested positive for COVID-19, and one person has died due to the virus in the past 24 hours.

The total number of positive cases since the start of the pandemic is now 59,312 and 5,674 people have died due to the virus.

The three areas with the highest increase are Montreal which recorded 71 new cases, the Lower Laurentians with 34 new cases and the Monteregie with 32 new cases.

The one death was recorded in the Quebec City region.

There were 19 fewer patients receiving treatment in Quebec hospitals Friday for a total of 189. Of those, 15 people are in the intensive care ward, which is three fewer than 24 hours ago.

On July 29, 17,190 novel coronavirus tests were performed, which is 93 fewer than July 28. (Quebec releases its testing data two days prior to its daily updates.)

* The Quebec public health source data was transferred to a new system on July 27, and it has required a few adjustments relating to the number of confirmed cases and deaths. The information made public Thursday should have reported 139 new cases (instead of 122) for a total of 59,026 and two new deaths (instead of none) for a total of 5,672. The following infographic was also corrected to reflect the revised data.