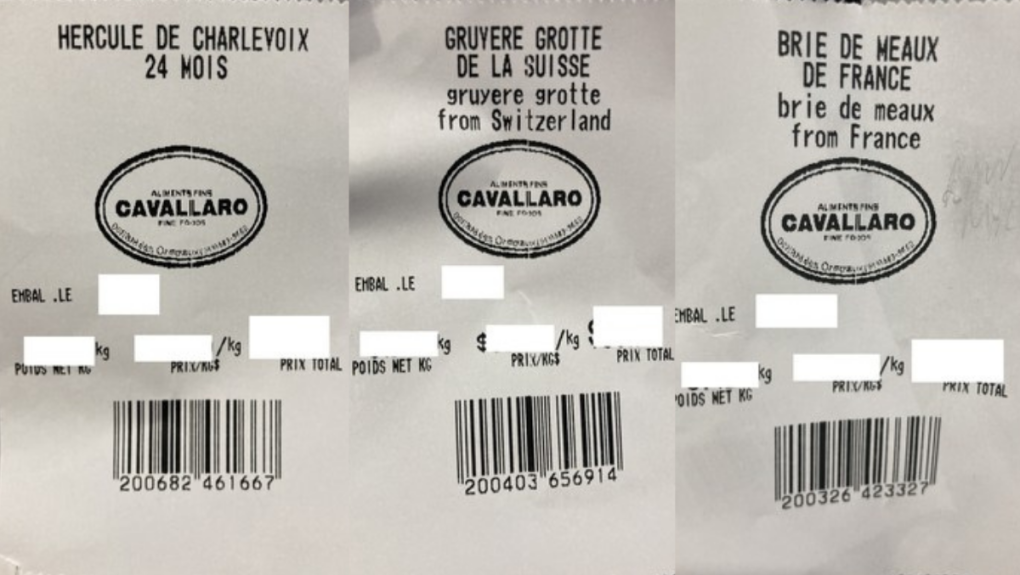 Certain cheeses from Fromagerie Cavallaro DDO have been recalled for not including the proper labelling. SOURCE: MAPAQ
MONTREAL -

A lack of required labelling prompted the Quebec Ministry of Agriculture, Fisheries and Food (MAPAQ) to recall certain Cavallaro cheeses.

The Fromagerie Cavallaro DDO products do not have the required "made from raw milk" label and should not be consumed by vulnerable people such as pregnant women, children, elderly people or those with weakened immune systems.

Cavallaro is located at 11722 Salaberry Blvd. in Dollard-des Ormeaux.

The following products should not be consumed or returned to the establishment where they were sold:

The products were sold until July 6 and packaged in clear plastic wrap and sold refrigerated.

No cases of illness have been reported due to consuming the products.

Indonesian police said they were investigating over a dozen officers responsible for firing tear gas that set off a crush that killed 125 people at a soccer match, as families and friends grieved Monday for the victims that included 17 children.

Nobel win for Swede who unlocked secrets of Neanderthal DNA

Swedish scientist Svante Paabo won the Nobel Prize in medicine Monday for his discoveries on human evolution that provided key insights into our immune system and what makes us unique compared with our extinct cousins, the award's panel said.

Hurricane Orlene is poised to strike Mexico Monday, bringing heavy rain and the potential for severe flooding to popular resort areas along the west coast.

An alliance of sex worker rights groups is in Ontario Superior Court today asking for several sections of the Criminal Code to be deemed unconstitutional.