MONTREAL - Quebec Premier Francois Legault called Don Cherry a "clown" on Monday after Cherry was removed from his position on Coaches Corner over comments criticizing immigrants who don't wear poppies.

In an interview with Quebec City radio station Energie 98.9, Legault said he was "very happy" Cherry won't have a prime time slot to express his controversial opinions any longer. 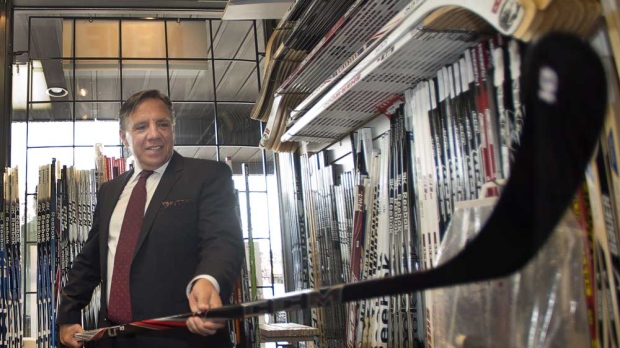 Coalition Avenir Quebec leader Francois Legault checks out a hockey stick during a visit to a sports store while campaigning Monday, August 27, 2012 in Boucherville, Que. THE CANADIAN PRESS/Ryan Remiorz


"He's a bit of a clown," the premier said in French. "Effectively, I've often seen him whining against francophones. Now he's doing it against immigrants. I think at some point he'll say anything. I think he shocks people just to get a reaction."

Cherry has long had a history of offending francophones. In 2004, Cherry enraged many Quebecers when he criticized hockey players who wore visors. Canada's official language commissioner investigated the incident to see if the remarks violated the official languages act.

"The tough guys like Tie Domi cannot wear them ... Most of the guys that wear them are Europeans and French guys," Cherry said.

Cherry has also weighed in on Quebec nationalism, taking shots at some Quebec NHL players.

"They don't want to wear the Canadian flag, but they want our money," Cherry said.

Sportsnet made the right decision to remove Cherry, Legault said, noting that he was so pleased with the decision that he might consider watching hockey in English.