Quebec is investing an additional $47 million to better protect vulnerable children in the care of youth protection.

The money will be used to hire nearly 400 employees to eliminate waiting lists for children who need help and reduce burnout, according to an announcement made by Junior Health Minister Lionel Carmant, who is in charge of the issue.

The funding comes in addition to $18 million already set aside in the 2019-2020 budget, and after the death of a seven-year-old girl in Granby. A youth protection probe showed the system “failed in many ways and at different times” in protecting her and preventing her death.

Carmant said he will be visiting with youth protection workers throughout the province this summer to determine what other support is needed.

Carmant said he wants to recruit and hire people by the fall. Part of the challenge is that while these are important jobs, they have become less desirable due to cutbacks and staff shortages.

Carmant said he hopes to entice professionals to apply now.

“The first thing we did was to implement this $18 million to consolidate the teams, bring back clinical support, make sure that the teams are more stable, that the junior members get all the information or the support that they require,” he said. “Now we're opening up a larger number of positions for the younger ones to get involved with youth protection.”

Carmant said he’s also spoken with the union to determine if there are any young retirees who want to return to work for youth protection.

“We'll gladly have positions for them as well,” he said.

After consultations, the government will divide the funds among the 15 regions, as well as three establishments in northern Quebec. It includes the follwoing: 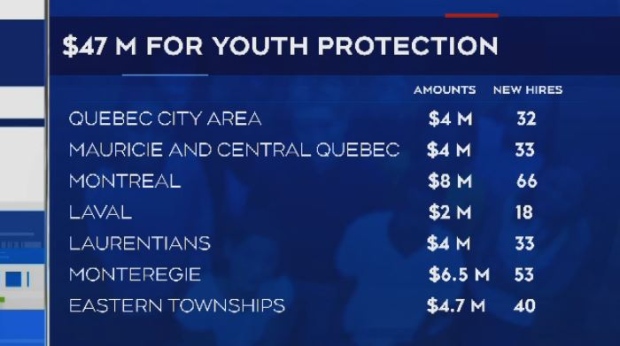