Quebec giving away $2 million in prizes to vaccinated residents

MONTREAL -- Quebec residents vaccinated against COVID-19 will be entered into draws throughout August for prizes amounting to $2 million, Minister of Health and Social Services Christian Dubé said Tuesday.

"It is not only to reward those who are already vaccinated, but also to those who will get vaccinated," said Dubé. "What we want to encourage is both first and second doses."

As of July 25, those wanting to register for the lottery can do so on the Clic Santé portal.

Alberta and Manitoba have also used prizes to incentivize people to get vaccinated.

Dubé was accompanied by Minister of Finance and Minister of the Economy and Innovation Eric Girard, as well as the director of the vaccination campaign, Daniel Pare.

Dubé said that all those who received a first dose and register will be entered into four draws in August and a grand prize draw Sept. 3. 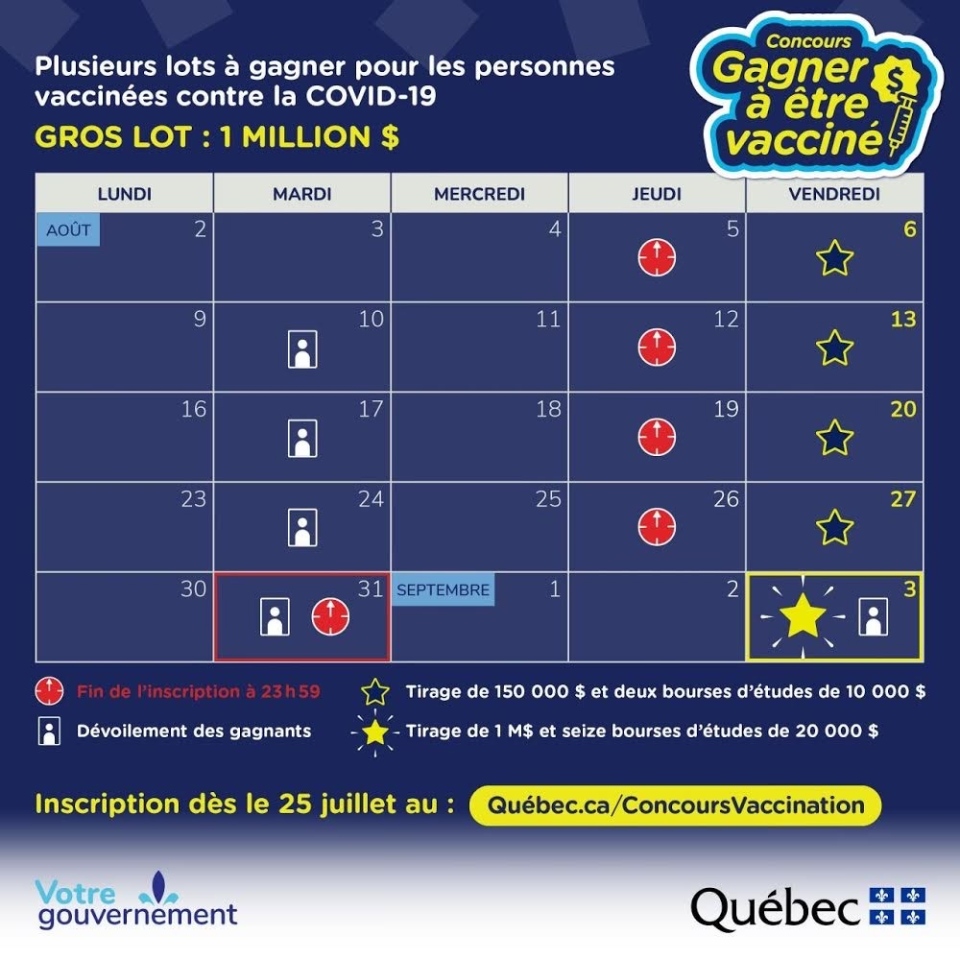 In August, Quebecers 18 and up who have received a dose and entered can win one of four $150,000 prizes, which will be drawn every Friday.

One is to get people to move their appointments up to before Aug. 31.

Another is to boost the number of people who have received their first dose to 75 per cent of the population.

The third is to combat variant spread by expanding vaccination coverage.

"We want to come back to a certain normality," said Dubé.

Loto-Québec had also confirmed that it was "at a first stage of discussions" on a vaccine-related lottery, according to its spokesman Renaud Dugas.

Dube added at the news conference that some regions' emergency rooms remain strained with COVID-19 patients. He has asked general practitioners to help out, as well as asking clinics to expand their opening hours.

Dube doubled down on recent statements about how allowing health-care staff to take vacations could lead to further backlogs in emergency rooms.

Quebec is reporting 83 new COVID-19 cases Friday, bringing the total number of people infected to 376,192 since the start of the pandemic.

Hospitalizations are up by three, bringing the number of people in Quebec hospitals to 84.

Of those, 25 people are in intensive care; up by two.