Calling it an "undeniable" case of systemic racism, a Quebec coroner says Joyce Echaquan’s death was accidental, but avoidable.

When asked if she thought Echaquan would be alive if she were a white woman, coroner Gehane Kamel's response was simple and direct.

Kamel addressed her findings Tuesday after issuing a report last week into the Atikemekw woman's death. She said racism and discrimination contributed to Echaquan's death and that the tragedy could have been prevented.

She also called on Quebec to recognize the existence of systemic racism in its institutions.

"I must confess in all sincerity that this public inquiry and some witnesses have shaken me," she said, recounting the events that led to the 37-year-old woman's death.

Echaquan, a mother of seven, filmed herself on Facebook Live as a nurse and an orderly were heard making derogatory comments toward her shortly before her death on Sept. 28, 2020, at a hospital in Joliette, Que., northeast of Montreal.

"From the first minute she entered the hospital, a label was placed on Ms. Echaquan," she said.

Kamel said medical staff, who assumed Echaquan was experiencing opioid withdrawal, failed to properly evaluate the medications she was taking and ignored the symptoms she described, including heart palpitations.

Later, after Echaquan became agitated and fell from bed twice, she was branded "theatrical" and strapped down.

Health-care workers didn't explore alternatives to calm her down or reassure her, such as calling the hospital's Atikamekw liaison officer, Kamel said.

Calling it a "perfect example of systemic racism," a lawyer for Echaquan's family says they plan to file a civil lawsuit and a human rights complaint over her death.

"She was judged and not listened to and treated accordingly," said lawyer Patrick Martin-Ménard, speaking alongside Echaquan’s husband Carol Dubé at an afternoon news conference reacting to the report.

"It's clear to us that we have all the evidence."

Details of the civil case and complaint will be made public in the next few days, he said.

But Kamel's report is also important for the public at large, he said, to ensure "this [isn't] happening again," said Martin-Ménard.

"Today what’s most important was really to read the coroner’s report and make sure her recommendations are applied."

Dubé called for justice for his wife, the mother of his children.

"To see evidence of what our hearts told us is, to some degree, comforting," he said. "Joyce is dead because she was Indigenous."

Dubé, still, said he saw good in many health-care workers, thanking them by name.

“There are beautiful people ready to open themselves, work hard and wear their hearts on their sleeves,” he said. “I tell you that I believe in you to help us change things.” 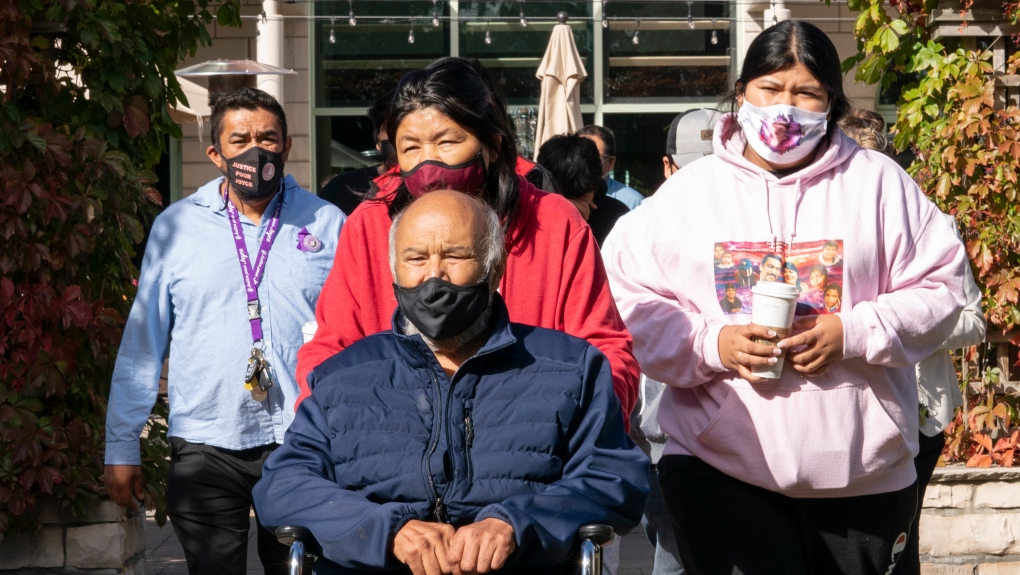 'CHILLS DOWN THE SPINE'

Kamel was visibly emotional while responding to questions, including moments where she choked back tears.

"In 2021 in Quebec, can we let someone die because this person is considered like an animal," she said.

The video of Echaquan's treatment was shared widely online and drew outrage and condemnation. The final report into her death found her initial diagnosis was based on prejudice and she wasn't properly monitored before finally being transferred to intensive care.

Echaquan died of a pulmonary edema that was linked to a rare heart condition.

"Without the video, Ms. Echaquan would never have been heard. This observation sends chills down the spine," said Kamel.

Despite the coroner's recommendation, the Legault government has steadfastly denied that systemic racism exists in the province.

"We have witnessed an unacceptable death, and we must ensure that it is not in vain," said Kamel. "It is unacceptable that large sections of our society deny such a well-documented reality." 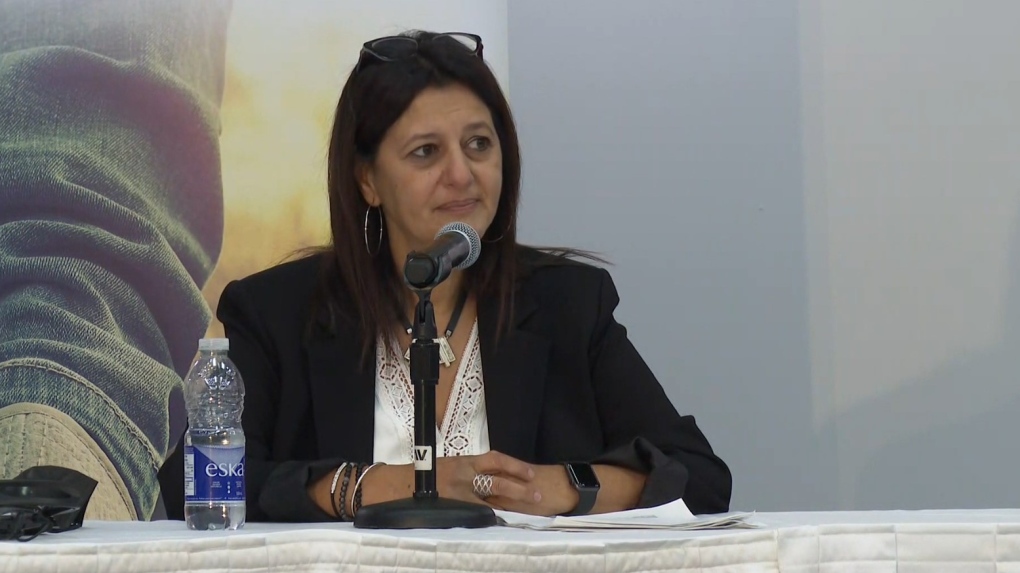 While she maintains that racism played a part in Echaquan's death, Kamel noted that it wasn't the only factor.

She said emergency-room overcrowding and a lack of trained staff on the floor meant that there weren't enough people to supervise Echaquan once she was restrained.

There was also was a failure to notice and react quickly enough when her condition began to deteriorate, the coroner added.

She urged decision-makers to give equal weight to her other recommendations, which include better staff-to-patient ratios, improved communication between health authorities when it comes to patient medication, and more training for staff on racial sensitivity and standards of care.

During a press conference Tuesday afternoon, Legault steered clear of recognizing systemic racism by saying he doesn't believe the "system as a whole" is discriminatory.

“I understand that the Indigenous people who have been victims tell themselves that there is systemic racism in Quebec. But the important thing is that it stops," he told reporters.

He said he was "shocked" by what happened to Echaquan in the hospital and that it was "unacceptable," but he denied her treatment was fuelled by systemic racism.

Instead, he explained that there groups of people who believe there is systemic racism in Quebec and those who don't.

"I think they don't use the same definition. I think that they use a kind of definition saying that, for example, in Joliette, they were more than one individual, so there were a group," he said.

"And because they were a group, they call that a system, but, for me, a system is all the system. And, for me, it doesn't apply to this situation in Quebec."

Legault defined system racism as a communicated effort to be discriminatory that comes "from above." In his view, he said, there has been systemic racism once before -- when children were taken from their families to residential schools.

But those days are over, he said.

"Is there something that starts from above and that is communicated throughout the health network, saying 'be discriminatory in your treatment of Indigenous people?'" he asked. "The answer is no."

The premier said he did recognize that certain employees in the health-care network have "discriminatory approaches" and, to that end, he welcomes the documentation of discrimination of people when receiving health-care services -- a recommendation of the Viens Commission.

"We are living this reality, and this reality is proof," he said. "It's a question of humanity and justice for all Indigenous people."

Awashish said he looks to Dubé as a role model.

"I try to keep this same state of mind," and work in a "positive manner," he said.

"To me there’s still a lot of work to do and to do it, we need everyone’s support."

CORONER GOT TOO POLITICAL, SAYS PQ

The leader of the Parti Québécois, Paul St-Pierre Plamondon, however, said Tuesday that Kamel overstepped her job by recommending that the government recognize systemic racism.

She should instead, he said, simply draw "factual" conclusions about the circumstances of the death. "This goes further than a coroner's mandate," he said Tuesday at a press briefing at the National Assembly.

Quebec Liberal leader Dominique Anglade and the spokesperson for Québec Solidaire, Gabriel Nadeau-Dubois, both said they found the coroner perfectly within her right to demand that systemic racism be recognized.

"If this coroner judges that racism is a cause of this death, it is not only her mandate, it is her legal and moral responsibility to say so," said Nadeau-Dubois.

"If it upsets some politicians, that's up to them. The coroner is doing her job and it's up to us now to decide what to do with these observations," he said.

Prime Minister Justin Trudeau says reconciliation will form part of the discussions Prince Charles and Camilla, Duchess of Cornwall, engage in during their visit to Canada. Trudeau is in Newfoundland and Labrador today where he will join Gov. Gen. Mary Simon in welcoming the royal couple to Canada for a three-day visit.

Calgary police said in a statement issued Monday they have identified a suspect wanted in an incident that resulted in the death of a Calgary mother of five.

Hundreds of Ukrainian fighters, including wounded men carried out on stretchers, left the vast steel plant in Mariupol where they mounted a dogged last stand and turned themselves over to Russian hands, signalling the beginning of the end of a siege that became a symbol of Ukraine's resistance to Moscow's invasion.

The body of 17-year-old Brittanee Drexel, who disappeared while visiting South Carolina's Myrtle Beach on spring break 13 years ago, has been found and a sex offender has been charged with murder, kidnapping and rape, authorities said Monday.

Queen Elizabeth II made a surprise visit Tuesday to a train station in central London to see a newly completed subway line named in her honour. The 96-year-old monarch, who has reduced most of her public engagements, appeared Tuesday at Paddington Station.

Lawyers for Johnny Depp questioned the truthfulness of Amber Heard's claim that Depp sexually assaulted her with a liquor bottle. Heard was cross-examined Tuesday after her testimony in Depp's libel suit against her.