MONTREAL -- Almost three years after the deadly Quebec City shooting that killed six men and injured several others, the mosque in Sainte-Foy is undergoing major renovations.

The hope, according to the Centre culturel islamique du Québec (CCIQ) former president Mohamed Labidi, is to make the building safer.

“Since the front of the mosque was made of glass, we wanted to remove the glass and replace it with masonry,” he told CTV News. “We [also] need more space because the Muslim community in Quebec City is growing since there has been a new wave of immigration, especially francophone people from Africa.”

Renovations were already underway three years ago when the shooting occurred. Now, there are plans to incorporate more locks, an advanced security system, a large foyer, additional entrances and other features in order to safely welcome a potential 300 additional worshippers to the space.

“It will be like a real mosque,” Labidi said. “We have a good relationship with our neighbours and Quebecers in general.”

The new, modern look will be complete with outdoor embellishments that will visually identify it as a place of worship.

“Our architect tried to have an architecture that is similar to the church in front of the mosque to outline the link between the two faiths, Christian and Muslim,” he said. 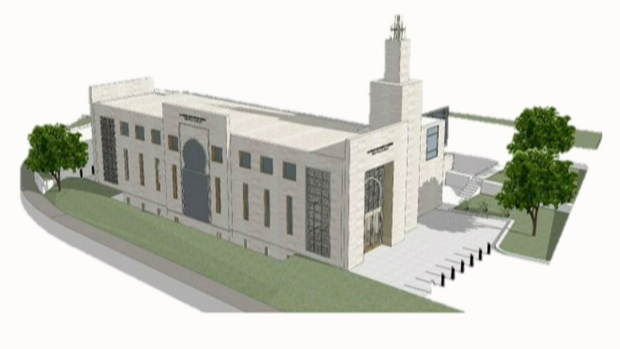 Officials estimate the cost of renovations will be $1.2 million. Mosque members say they are connecting with the Muslim community across Canada to raise money to help fund the repairs.

The centre is also working to create a Muslim cemetery – a project that was approved by Quebec City’s municipal administration last December.

The cemetery is expected to open by the spring and renovations on the mosque should be completed by the end of June.

An intimate commemoration is planned on Jan. 29 to remember the victims of the deadly attack.

“We lost six of our fellow Quebecers who left behind widows, orphans, grieving families and a society in shock,” organizers said. “It is our duty to remember this tragedy to encourage our society to change for the better and ensure that it never happens again.”

The free community dinner is expecting to welcome about 250 people, including survivors, families of the victims, residents and local politicians.