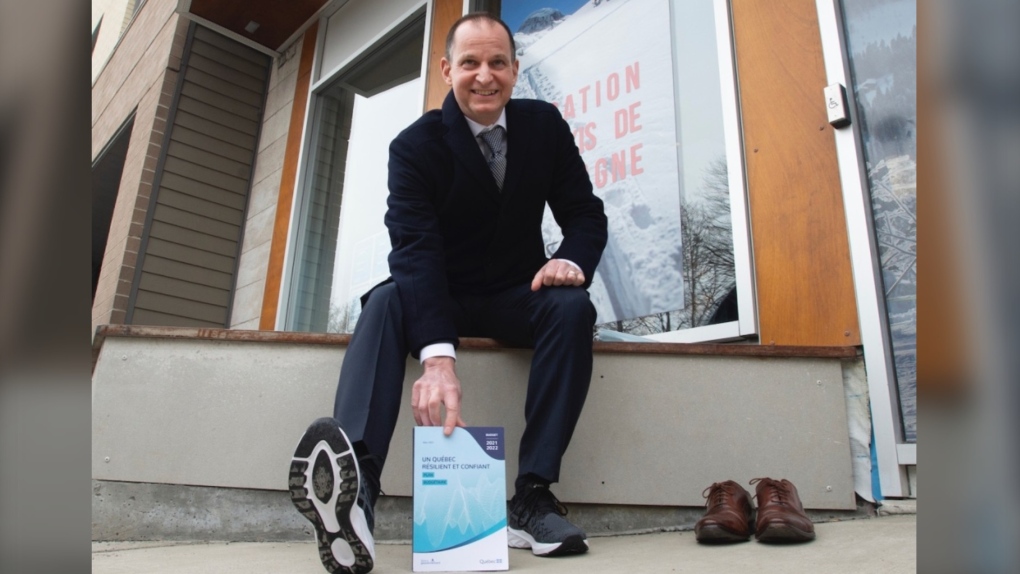 Quebec Finance Minister Eric Girard displays his budget speech and a pair of new running shoes outside a store, on the eve of a provincial budget speech, Wednesday, March 24, 2021 in Quebec City. THE CANADIAN PRESS/Jacques Boissinot

QUEBEC CITY -- Sports infrastructure will not be forgotten in the 2021-2022 budget, one that promises to focus on the resilience of Quebecers and is set to be tabled Thursday by Finance Minister Eric Girard.

A new $125-million fund will be created to improve sports infrastructure in schools, the minister announced Wednesday morning.

"I wanted to highlight the resilience of our small and medium-sized businesses," Girard told reporters to explain why he chose a running shoe store, Le coureur nordique, to carry out the traditional photo op showing the finance minister showing off a new pair of shoes on the eve of the budget.

He chose the store in the Montcalm district of Quebec City to encourage the local economy and as a reminder that SMEs had to make a commendable effort to adapt over the past year due to the health crisis.

After a year of the pandemic that has left a huge hole in public finances, Quebec's 2021-2022 budget will be a "classic" one, Girard said, with a focus on economic recovery, health and education.

In this context, the minister agreed that returning to a balanced budget would be "difficult," but he did not reveal whether he would respect the law to set set a five-year timeline to reach zero deficit by 2025-2026.

If he ever wanted to extend that deadline, he would have to change the law.

"The importance of getting back to a balanced budget has not changed," the minister said. "We will also see if the mandatory contributions to the Generations Fund are maintained."

The minister promised to provide an update on this issue on Thursday when he presents his third budget, entitled "A Resilient and Confident Quebec." His fiscal framework will span five years.

"Everything in its own time," he told reporters, not wanting to reveal his game plan and make announcements ahead of Thursday's budget.

The budget is expected to contain measures aimed at small and medium-sized businesses, which have been badly affected by the pandemic, many of which are facing massive job losses or even bankruptcy.

We already know that Quebec's net debt — which stands at $189 billion — will increase by another $12.4 billion. Quebec plans to review its accounting standards for calculating federal transfer payments to comply with a recommendation by Auditor General Guylaine Leclerc.

Despite this fiscal cliff, the Legault government has repeatedly pledged not to increase the tax burden on taxpayers, and therefore to refrain from raising taxes, while maintaining the current level of public services. Only time will tell if he will be able to keep his promise in such a fragile fiscal environment.

— This report by The Canadian Press was first published March 24, 2021.